After growth of nearly 6% in two fiscal years, Pakistan’s economy began to show signs of decelerating.

Devastating floods, high inflation, ballooning public debt, and weakening of the Pakistani rupee is dragging down the country’s economic growth in this current fiscal year 2022/2023 (July-June).

Will a Pakistan recession materialise this year and beyond? Let’s look at the numbers and what the analysts have to say.

Recession is generally defined as a time when economic activity is down. Analysts agree that a recession occurs when a country's gross domestic product (GDP) falls significantly for two consecutive quarters.

What is your sentiment on Wheat?

Give Wheat a try

Is a Pakistan recession happening now?

Despite political turmoil, natural disasters and a high poverty rate, Pakistan has maintained a slow but stable economic growth before the pandemic. Based on data from the Pakistan Bureau of Statistics (PBS), the country’s economy recorded growth in the 3.6% to 5.5% range between 2010 to 2019.

Pakistan’s recession history showed the country’s economy contracted by -0.97% in fiscal year 2020 (July 2019/June 2020) during the Covid-19 pandemic. Like many other countries world-wide, the pandemic restrictions took a toll on the country with the third highest extreme poverty number in South Asia, according to the Asian Development Bank (ADB).

Data compiled by Macrotrends suggested Pakistan recession happened in 2019 and 2020 when the country’s GDP growth recorded an annual decline of more than 3%.

The various fiscal and monetary policy measures, including stimulus packages, were successful in reviving economic activity and private investment. Pakistan’s central bank monetary policy in FY2021 which aimed to revive the construction industry and mandatory housing finance targets, fuelled stronger growth momentum in FY2022, according to the ministry.

However, the high economy began to show overheating due to higher imports of consumer goods, energy, and non-energy, widening the budget deficit.

According to a June 2022 report by global audit, tax and advisory firm KPMG in June 2022:

In recent Pakistan recession news, the country has suffered from one of its worst floods in history caused by a combination of torrential monsoon rains and melting glaciers.

As of 23 October, the floods have killed 1,731 people and 1.16 million livestock since they began in mid-June, according to data from Pakistan's National Disaster Management Authority (NDMA). The natural disaster has affected 33 million people in six South Asian states or 14.7% of its total population of 224.78 million.

Based on a Food and Agriculture (FAO) geospatial assessment done by the country’s Finance Ministry, the floods damaged 9.461 million acres (MA) of cultivated crops in four states, increasing the risk of food insecurity.

“Besides the cost in terms of lost lives and capital, these events will certainly affect the creation of gross value added and hence economic growth,” said the Ministry in its September’s economic update. It added:

“The economic outlook for Pakistan in the current fiscal year has become uncertain and will likely remain below the target. Macroeconomic imbalances may ease with the expected slowdown in economic growth.”

However, the ministry did not forecast a Pakistan economy recession for 2022.

Let’s take a look at some of the factors that have influenced Pakistan’s economy throughout the year.

Damage on farmland had inflated food prices in the domestic market, contributing to increasing inflation.

Inflation in Pakistan peaked at above 27% in August, according to the PBS, before easing to 23.2% in September.

In September’s economic update, Pakistan’s Finance Ministry said that while the effects of floods on inflation was being alleviated by government measures, risks of second-round effects of recent inflationary shocks have persisted.

The ADB recently revised its forecast for Pakistan’s headline inflation in FY 2023 up to 18% from an earlier projection of 8.5% on potential blows from the rupee’s depreciation and fuel and energy price adjustments.

“Inflation is expected to accelerate in FY2023 as a new tax measures announced in the budget, together with an increase in the wheat support price and planned upward adjustments to electricity tariffs, are expected to keep inflationary pressures high,” the Asian Development Bank (ADB) said.

Since the country switched from a managed exchange rate to a free-floating exchange rate in 2018, the Pakistani rupee (PKR) has been depreciating against the US dollar.

The PKR's depreciation has accelerated as aggressive monetary tightening initiated by the US Federal Reserve (Fed) has strengthened the USD against other currencies.

The US Dollar Index (DXY), which measures the value of USD relative to a basket of foreign currencies, was up over 15% year-to-date (YTD), trading at around the 110 level as of 25 October 2022, according to data from Investing.com. 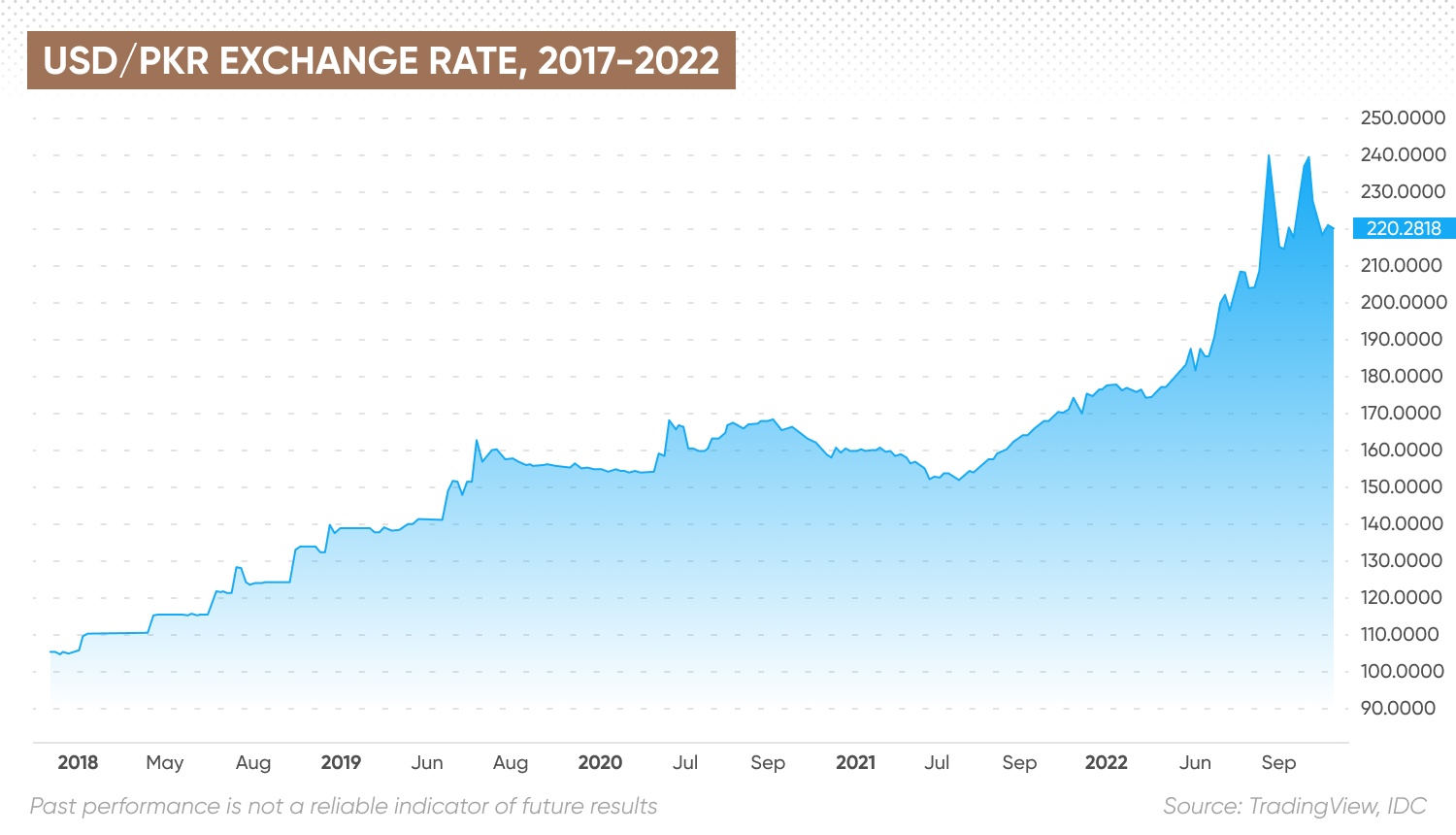 On 10 October, the State Bank of Pakistan (SBP), the country’s central bank, decided to maintain its policy rate unchanged at 15% from its August meeting.

“Based on currently available information, the MPC was of the view that the existing monetary policy stance strikes an appropriate balance between managing inflation and maintaining growth in the wake of the floods,” the bank said in its statement.

To fight inflation and cool the nation’s overheating economy, the SBP increased its policy rate by a total of 800 basis points (bps) from September 2021 to 15% in August 2022.

Fitch Solutions on 11 October expected that the SBP will resume its tightening cycle due to elevated inflation and to reduce the country’s import bill to slow the decline in forex reserves.

“Our forecast underscores our expectation for future rate hikes to be less aggressive as inflation is likely to peak soon, while a worsening growth outlook prompts the central bank to dial back the pace of tightening,” the firm said.

The depreciation of the Pakistani rupee against the US dollar and increased government’s borrowing to plug the deficit has contributed to the ballooning public debt.

According to the World Bank, the country financed almost 60% of the fiscal deficit through domestic banks. Public and publicly guaranteed debt stood at 78% to GDP and expected to fall to 71.9% in FY2024.

The World Bank’s Pakistan economy forecast expected the country’s GDP growth to slow to 2% in the current FY2023 (July 2022/June 2023), as the flood deteriorated its economic outlook.

The country’s economy was expected to recover to 3.2% in FY2024 aided by a rebound in agricultural production, reconstruction efforts, projected lower global inflationary pressures, and improved confidence from the macroeconomic stabilisation measures, according to the Bank’s October Pakistan Development Update.

“However, flooding is expected to impose a lingering drag on output in the medium term through the loss of livelihoods and human capital, disruption to crop cycles, infrastructure damage, and possible financial sector impacts,” the bank added.

In September, the ADB cut its Pakistan economy projections for FY2023 – the institution predicted GDP growth of 3.5% next year, down from the 4.5% forecast in April, as the ongoing stabilisation efforts to address significant fiscal and external imbalances were likely to curb economic activity.

Fitch Solutions’ Pakistan economic forecast expected the country’s real GDP growth to grow by a mere 0.2% Year-over-Year (YoY) in the current fiscal year FY2022/23, a significant deceleration from 6% growth in the previous year.

Analysts mentioned in this article forecast the economy to slow down significantly in the near term, but they did not forecast an economic recession in Pakistan.

Keep in mind that analysts’ predictions can be wrong. You should always do your own research before trading or investing. Remember that past performance is not a reliable indicator of future results. And never trade with funds that you cannot afford to lose.