Nio (NIO) has been on a downtrend since 2021 as Chinese stocks have been battered by the county’s regulators approach to large, privately-owned corporations and a deteriorating global macroeconomic backdrop.

In June this year, Grizzly Research published a report alleging, among other things, that Nio inflates revenues and net income by relying on an unconsolidated subsidiary called Wuhan Weineng. Despite NIO’s weak performance and the seriousness of the Nio short report, short interest has remained stable in the past couple of months.

If market sentiment suddenly changes, can a Nio short squeeze occur soon? In this article, we look closer at the Chinese electric vehicle (EV) manufacturer.

What is Nio? Company overview

Nio was founded in 2014 by the Chinese entrepreneur Li Bin. The company manufactures EVs, competing with the likes of Tesla (TSLA) in the Chinese market.

Nio’s CEO since 2018 is William Li. The company employs nearly 10,000 people and has manufacturing facilities in multiple Chinese cities, including Nanjing and Hefei. It also has offices in Germany, the UK, Sweden and the US.

Nio stock was listed on the New York Stock Exchange (NYSE) in September 2018 at $6.30 a share. Each American Depositary Share (ADS) represents one Class A common share. 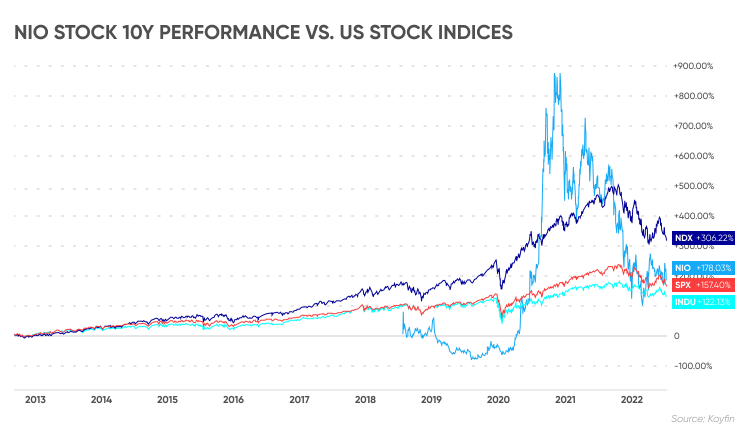 What is a short squeeze?

Short sellers borrow assets from other market players – primarily brokerage firms – and sell them with the expectation of buying them back at a lower price on a future date as they expect that, for some reason or another, the value of said security will decline.

A short squeeze forces short sellers to cover their open positions as a result of an unexpectedly sharp increase in an asset’s value. This spike is typically prompted by positive news around the asset or by the actions of one or more parties who may coordinate efforts to bid up the price.

Short squeezes may be more likely to occur when the asset’s short interest is at a high level. Rising asset prices attract new buyers. The combination of new buyers and panicked short sellers boosts the demand and price of the stock, resulting in a short squeeze.

Short sellers will have to move quickly to cut their losses by buying back a significant number of the shares they have borrowed.

Once short sellers have fully covered their open positions, the price of the asset may progressively decline as buying pressure will diminish.

Nio responded to the short-seller report by stating that it contained several “errors, unsupported speculations and misleading conclusions and interpretations regarding information relating to the Company.”

The company conducted an “independent internal review” to explore the allegations made by Grizzly Research, “to protect the interests of all shareholders.” Various independent professional advisors, an international law firm, and a forensic accounting company were hired to form a review committee.

On 26 August, Nio announced that, upon completing a thorough investigation of allegations made by Grizzly Research, the company had concluded that they were not substantiated.

As of 22 September 2022, the percentage of shorted Nio shares, according to MarketBeat, stood at 3.6%, indicating a low Nio short squeeze interest among market participants.

Moreover, based on the average Nio stock volume, it would take short sellers only a day to cover their open positions. This reduces the odds of a Nio short squeeze taking place soon.

The low percentage of Nio’s float being shorted, as of 23 September, and the low number of days that it would take short sellers to cover their open positions reduces the odds of a Nio short squeeze happening soon.

Nio has moved to assure the market that the claims made in the Grizzly report are unfounded. The stock has traded in a fairly stable range around the $20 mark in the past few months.

The low Nio short squeeze interest at the moment may not suffice to produce a sustained jump in the stock price.

According to data compiled by MarketBeat, as of 23 September, the consensus recommendation for Nio stock stood at a moderate buy, with 13 out of 14 analysts rating the stock a ‘buy’.

In April and May this year, UBS Group and Bank of America upgraded Nio stock from ‘neutral’ to ‘buy’. Morgan Stanley, Nomura, Mizuho and Citigroup have reduced their price targets for the stock in the second semester of the year.

In regards to the stock’s outlook, analyst Vincent Sun from Morningstar wrote:

“Nio delivered solid second-quarter revenue that exceeded the high end of company’s guidance by 2% and our estimate by 6%. Despite enlarged losses on rising operating expense levels, management is confident of delivering its full-year target of around 150,000 units, which we believe is a positive surprise to the market”.