Mastercard stock prediction: What do the experts think?

Stock in global payments processor Mastercard has lifted nearly 13% in the last fortnight even with a slight dip today (23 March) to $345.

After the company suspended its operations in Russia the already bearish trend worsened dropping to a low of $306 on 8 March.

However this is a pattern very similiar to that experienced by rival Visa which saw its stock price rise more than 17% over the same period. It too had taken a hit after suspending all of its operations in Russia in response to the invasion of Ukraine. That announcement also deepened the slide this stock had been experiencing over the previous month where it had fallen 18% to a low on 8 March.

In this analysis, we look at Mastercard's recent results, highlight the threats and opportunities it faces, and consider what may happen to the stock price over the next few years to build a plausible Mastercard share price forecast. 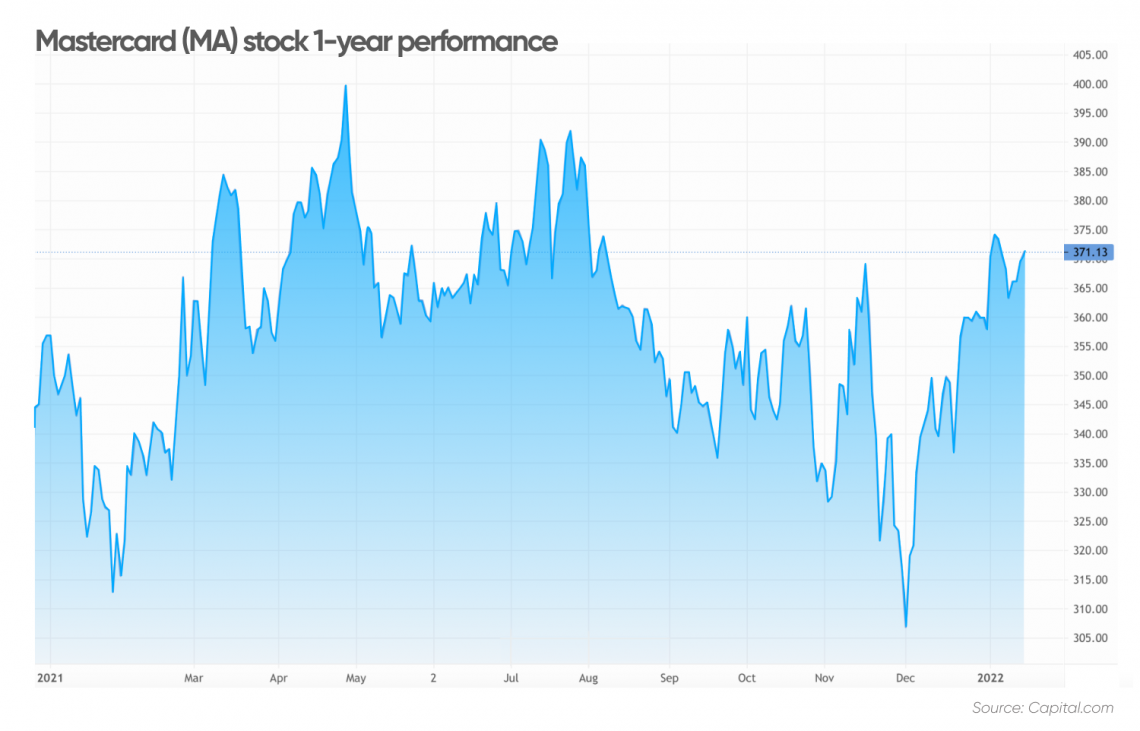 The longer-term story is more encouraging for investors. The stock has risen 238% over the past five years from its $109.96 price in the early weeks of January 2017.

Overall, the share price has risen 854% from its $39 opening price on the New York Stock Exchange in May 2006. 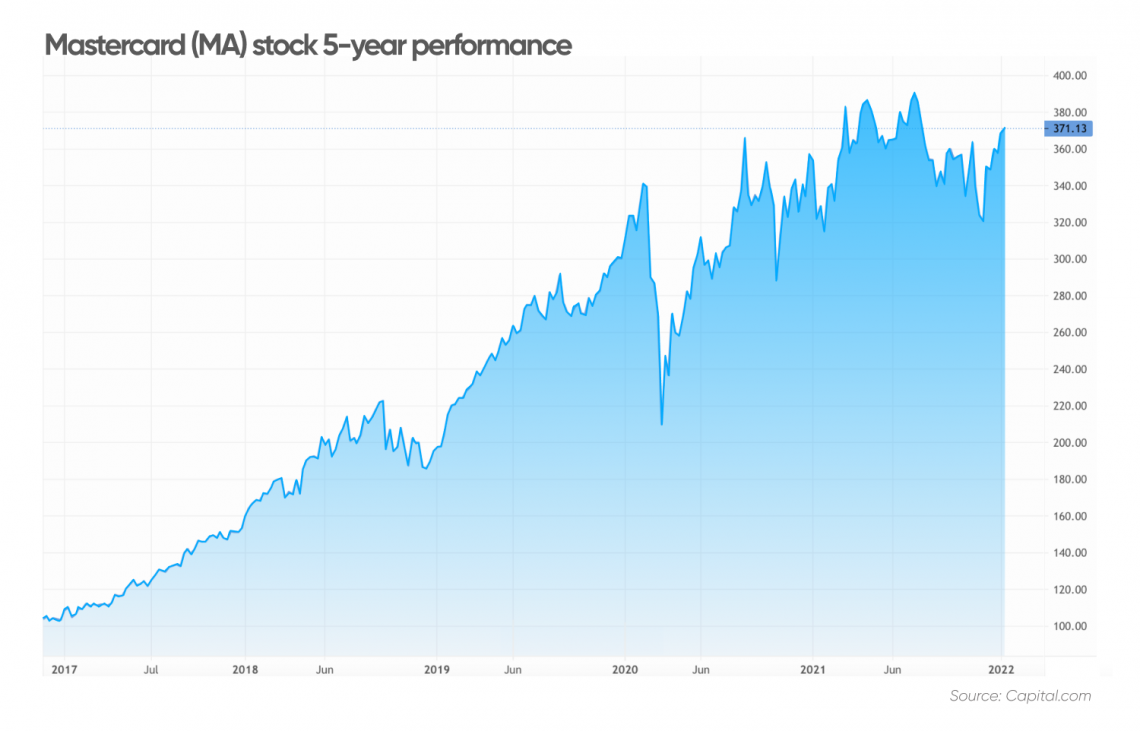 Stock in (MA) has been on the rise again following a surge and decline when it published its fourth quarter results which beat market expectations.  On 16 February the stock was at $381.54 having fallen from its 2022 peak of almost $400.

Those results showed that increased cross border travel as the covid pandemic eased had helped drive up consumer spending and with it Mastercard's net revenues, up 27% to $5.2bn. Improved margins meant profits grew at 37% to $2.8bn.

Mastercard is a major global player in electronic payments, one of the fastest-growing business sectors. While the industry is potentially vulnerable to economic slowdowns – and the subsequent reduction in spending – the company has enjoyed strong growth in recent years.

According to its 3Q earnings report, Mastercard announced adjusted third-quarter net income of $2.3bn and adjusted diluted earnings per share of $2.37 for the three months ending 30 September 2021.

This represented a significant increase over the $1.6bn income figure for the corresponding period in 2020, which came with earnings per share of $1.60.

In a statement, chief executive Michael Miebach said continued momentum was seen across the business as it delivered strong revenue and earnings growth.

“Our performance was driven by the execution of our strategy, healthy domestic spending and solid growth in cross-border spending, which has recently returned to pre-pandemic levels,” he said.

Miebach pointed out it was also extending “the scale and power of our trusted network” through innovations like the new Mastercard Installments program.

“We continue to add to our efforts in cryptocurrency services and open banking through the acquisition of CipherTrace and the planned acquisition of Aiia,” he added.

According to its recent investment community meeting, Mastercard believes there are significant opportunities to drive growth in consumer purchases and by capturing new payment flows. It highlighted its “consistent winning strategy” of growing its core, diversifying into new customers and geographies, and building new areas for the future.

On 15 February Mastercard said it is to expand its payments-focused consulting service with a new practice dedicated to crypto and digital currencies.

It is also launching services looking at open banking, open data, and environment, social and governance (ESG).  Raj Seshadri, the president of Data & Services at  Mastercard, said the move reflects how the business is changing. "It’s about helping customers navigate today’s challenges and anticipating what’s next,” he said.

During the third quarter of 2021, Mastercard repurchased approximately 4.3 million shares for $1.6bn and paid $434m in dividends, according to the company’s statement.

“Quarter-to-date through 25 October, the company repurchased approximately one million shares at a cost of $361m, which leaves $4.8bn remaining under the current repurchase program authorisations,” it added.

The UK parliament’s Treasury Committee is examining the rising cost of card payments for businesses.

According to the Treasury Committee's chair, member of parliament Mel Stride, these increases impose an additional cost on firms, “many of whom are already hard pressed” and facing financial difficulties due to the uncertainties of the pandemic.

“Given that Visa and Mastercard currently dominate this space, it’s vital to ensure that there is sufficient regulation and competition in the market so that businesses are not subject to ever-increasing servicing costs,” he said. “My committee will be closely following the PSR’s [Payment Systems Regulator] plans to protect consumers and businesses from rising prices, and we look forward to exploring these issues in greater depth when they appear before the Committee in March.”

Mastercard stock prediction: What do the experts think?

Danni Hewson, a financial analyst at AJ Bell, believes it’s too simplistic to think that all financial stocks will do well as interest rates start to rise.

“The potential cost of living crisis that could force consumers to back away from purchases in order to shore up their household finances,” she told Capital.com.

She acknowledged Mastercard is “cautiously upbeat” about the outlook, however, and believes the company could be in a position to benefit over the coming months.

“Consumers looking for extra protection from their online spending will continue to gravitate to payment options like Mastercard and there’s the additional boon that could come from Amazon’s spat with Visa, which looks set to see that payment platform out in the cold from mid-January,” she said.

“UK regulators are taking a long look at the fees charged by both Visa and Mastercard and EU regulators have already made plenty of noise about the lack of competition in the sector,” she said.

“Players like PayPal are nibbling away and the space is likely to be further dogged by scrutiny and competition over the next couple of years,” she added. “With inflation unlikely to be tamed quickly, this is a stock that might seem a little too pricey for many investors.”

According to Brett Horn, senior equity analyst at Morningstar, Mastercard stands to benefit from the ongoing shift toward electronic payments.

“Digital payments, on a global basis, surpassed cash payments just a couple of years ago, suggesting that this trend still has a lot of room to run, and we think emerging markets could offer a further leg of growth even if growth in developed markets slows,” he wrote in a recent note.

He also acknowledged that Mastercard faced some near-term issues.

“Cross-border transactions, which are particularly lucrative for the networks, came under heavy pressure due to the fallout from the pandemic and a reduction in global travel,” he said. “We expect a full recovery, but this could take a few years.”

The state of the economy, however, is seen as Mastercard’s biggest risk by Horn. “A downturn in the economy would slow overall growth, as Mastercard’s revenue is sensitive to the volume and dollar amount of consumer transactions,” he said.

Is Mastercard stock a buy, sell or hold? The views of 15 analysts compiled by MarketBeat presented an optimistic forecast for the stock as of 23 March.

The consensus view for the stock was a buy, with 14 buy ratings and only one analyst having it as a hold. Their 12 month MA stock forecast was $429.2. That would be a 24% premium over the last closing price of $350 on 22 March.

The highest price target came in at $482 while the most pessimistic forecast predicted a rise to $380.

Mastercard has been rated by analysts from houses such as Mizuho, Morgan Stanley, Raymond James, UBS Group, and Wedbush recently. 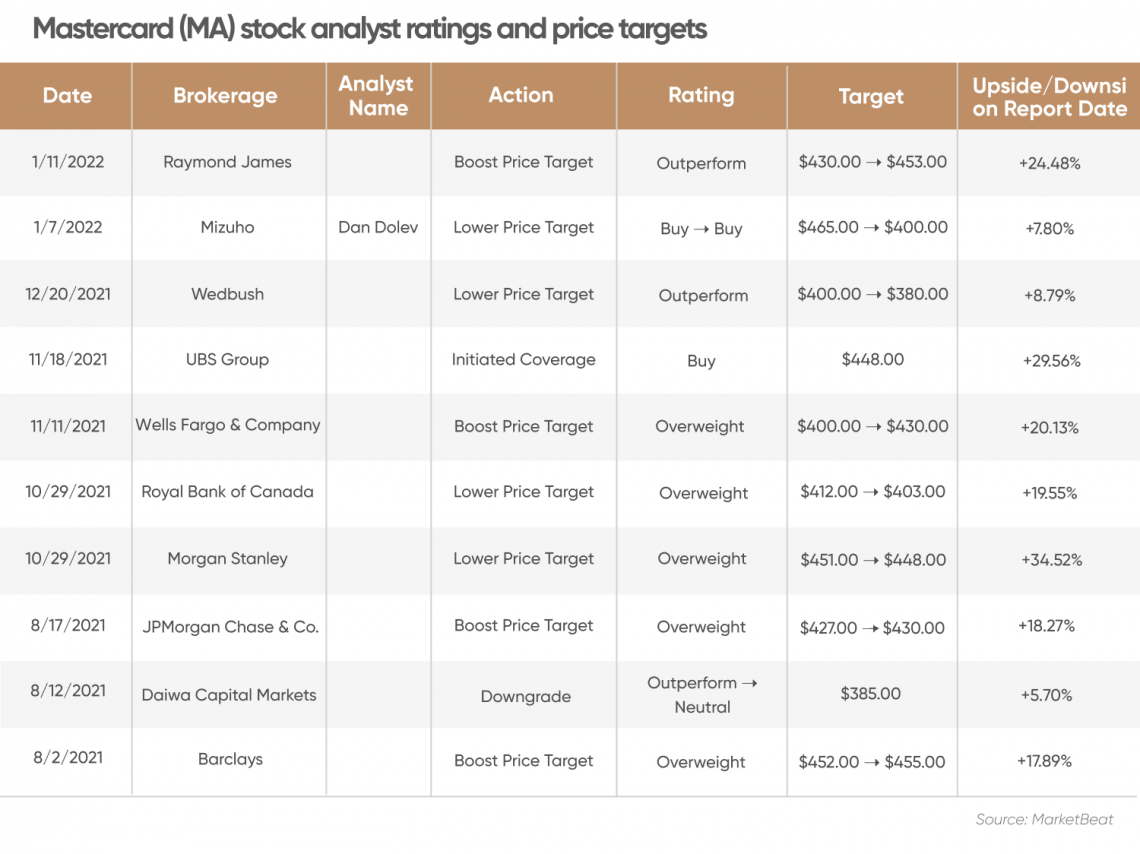 According to the algorithmic forecasting of Wallet Investor as of 23 March, the stock might be a “good long-term (one year) investment” and could rise to $394 over the next 12 months.  Meanwhile, the five year Mastercard share price forecast puts the stock as high as $585, an increase of 67% over the $350 level at the close on 22 March 2022.

When looking for Mastercard stock projections, it’s important to bear in mind that analysts’ forecasts can be wrong. Predictions are based on making fundamental and technical studies of the MA stock’s historical price pattern, but past performance does not guarantee of future results.

It is important to do your own research and always remember your decision to trade depends on your attitude to risk, your expertise in the market, the spread of your investment portfolio and how comfortable you feel about losing money. You should never invest funds that you cannot afford to lose.

Whether MA is a suitable investment depends on your own investment objectives – and the opinion you form based on your own research. Remember, it’s important to reach your own conclusion about the company’s prospects and likelihood of achieving analysts’ targets.

The company has benefitted from the increasing shift towards digital payments – and this is expected to increase further due to the enthusiasm for online shopping. The company still faces growing competition and more regulatory scrutiny, however.

The consensus view for the stock was a buy, with 14 buy ratings and only one analyst having it as a hold. Their 12 month MA stock forecast was $429.2. That would be a 24% premium over the last closing price of $350 on 22 March.