The Central Bank of Kenya (CBK) hiked its policy rate to 8.75% on 23 November to tame inflation that has accelerated for eight consecutive months. It is the highest policy rate since November 2019 when it stood at 8.50%.

While global energy and commodity prices have retreated from multi-year highs, the east-African country is struggling to contain inflation brought by a decision to remove fuel subsidies and the most severe drought in four decades.

The new Kenyan government under President William Ruto may continue to reduce subsidies. The dry spell was projected to continue until 2023. With that in mind, what are the projected Kenya interest rates in 5 years?

What is the Central Bank of Kenya?

The Central Bank of Kenya was founded in September 1966 following the nation’s independence from Britain in December 1963. The mandate of the central bank is to develop and carry out monetary policy that fosters liquidity, solvency and stability in the banking sector.

Additionally, it prints banknotes and coins and offers banking services to other financial institutions, including commercial banks and the Kenyan government.

The CBK’s Monetary Policy Committee (MPC) is responsible for formulating monetary policy, which aims to maintain a low and stable inflation. The Kenyan government and the CBK set the inflation target for fiscal year 2022/2023 at a range of 2.5% to 7.5%.

The committee’s main tool for all monetary operations is the central bank rate (CBR).

The CBR is the lowest acceptable rate when the CBK wants to increase liquidity by purchasing a reverse repo. The CBR, on the other hand, is the highest rate the CBK will pay on any bid received when the central bank wishes to withdraw liquidity through a vertical repo.

At least every two months, the MPC evaluates and modifies the CBR. Short-term interest rates rise or fall in response to changes in the CBR.

The CBR will be reduced when the central bank wants to loosen monetary policy. A decrease in the CBR lowers market interest rates, promoting growth and economic activity. 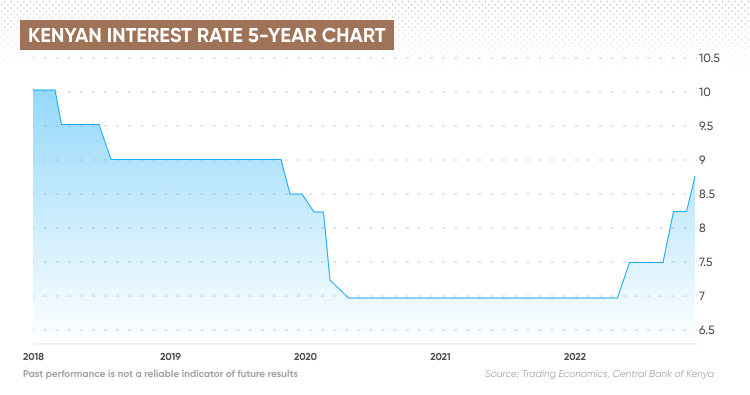 The MPC lowered the interest rates in Kenya by 25 basis points (bps) to 8.25% on 27 January 2020, from 8.5% in November 2019. A benign inflation rate, stable Kenyan Shilling (KES), and healthy economic growth created room for the central bank to reduce its policy rate

In March 2020, the MPC sharply reduced Kenya’s interest rates by 100 bps, bringing the CBR down to 7.25%, in anticipation of the Covid-19 pandemic's slowing effects on economic growth.

The MPC decided to raise the CBR to 7.50% on 30 May 2022, to tame rising inflation caused by soaring food and fuel prices. Russia's invasion of Ukraine in late February exacerbated supply chain disruptions caused by the pandemic’s restrictions, causing global commodity and energy prices to reach multi-year highs.

Price pressures gained 6.5% in April 2022, from 5.6% in March, due to higher fuel and food prices, according to Kenya’s central bank.

In July’s meeting, the MPC decided to leave the rate unchanged despite inflation having hit 7.9% in June and worsening global economic headwinds. The bank expected domestic inflationary pressures to ease as global prices of oil, wheat and edible oils started to moderate.

In the September and November meetings, the MPC hiked interest rates to 8.25% and 8.75%, respectively, as domestic inflationary pressures showed no sign of abating.

By October, inflation had accelerated for eight consecutive months, hitting 9.6%, according to the Kenya National Bureau of Statistics (KNBS).

Kenyan interest rate news: Is there room for further hikes?

Stubbornly high inflation has been the primary consideration for the CBK’s aggressive hiking of interest rates in Kenya in the past two meetings. Let’s take a closer look at several news that may influence Kenya’s interest rate forecast.

Prices for food and non-alcoholic beverages have remained the biggest contributor to inflation. They rose 15.8% year-over-year (YOY) in October, compared to an annual rate of 9.92% in March.

A prolonged dry spell in the country's Arid and Semi-Arid Land (ASAL) regions has harmed agriculture and livestock, driving up food prices and contributing to acute food insecurity.

The United Nations Office for the Coordination of Humanitarian Affairs (UN OCHA) on 28 November reported that communities in the Horn of Africa, including Kenya, are in the midst of a likely failed rainy season from October to December 2022.

Since October-December 2020, this would be the fifth consecutive season of low rainfall. For Kenya, it is the worst drought in 40 years.

The UN forecast the area may face a sixth consecutive season of poor rainfall in March to May 2022.

“Despite moderating global food prices since May 2022, drought conditions in Kenya will continue to keep domestic food prices high over the remainder of 2022,” said Fitch Solutions in a note dated 12 October.

The war in Ukraine, which has disrupted grains exports, particularly wheat, from the Balkan region, has worsened food inflation.

Kenya imports about 86% of its consumption of wheat – one of the country’s staples. Russia is the country’s top wheat supplier, accounting for 31% of the total wheat imports in 2020/2021.

The elimination of fuel subsidies resulted in a 12% increase in Kenya’s average petrol price from KES159.94 ($1.31) per litre to KES179.06 in October. That same month, transportation costs rose at an annual rate of 11.6%, accounting for the second largest contributor to monthly inflation as subsidy cuts balance falling global crude oil prices.

“We expect inflation rates to remain elevated arising from high fuel prices due to the Organization of the Petroleum Exporting Countries (OPEC) decision to lower their production target by 2 million barrels per day which will affect global oil supply as well the partial removal of the fuel subsidy which we expect to be completely eliminated in the coming months.”

Fitch Solutions expected inflation in Kenya to average 7.4% in 2022, higher than average inflation between 2012 to 2021 of 6.4%. The consulting firm projected inflation to ease in 2023 to average 5.4% as drought that currently hit the country was seen easing and global oil prices decline.

The Kenyan shilling has continued to depreciate against the US dollar (USD) as the economy recovers due to rising fuel demand. Kenya is a net importer of oil. Rising fuel demand means increased demand for US purchases of oil. Oil prices have risen to multi-year highs, which has caused the KES to weaken.

The US Federal Reserves’(Fed) hawkish monetary tightening that has strengthened the US dollar against other currencies, added downward pressure on the KES.

“We expect the Kenyan Shilling to remain under significant pressure in the medium term as demand for the dollar continues to increase in the oil and energy sector and as traders beef up their hard currency positions in anticipation for an even higher demand for the dollar during the festive period,” Cytonn Investment wrote in November.

Trading Economics did not provide a projected Kenyan interest rate for 5 years’ time.

When looking into Kenya’s long term interest rate forecast, remember that analysts’ predictions can be wrong.

You should always do your own research on interest rate prediction in Kenya by reviewing the latest news, analyst commentary, fundamental and technical analysis. It is important to note that past performance does not guarantee future results. And never trade with money you can't afford to lose.

Natural Gas 2.704
Trade
-5.430%
US100 12030.0
Trade
-1.140%
BTC/USD 23224.00
Trade
-2.670%
XRP/USD 0.40286
Trade
-2.960%
ETH/USD 1589.10
Trade
-3.580%
The difference between trading assets and CFDs
The main difference between CFD trading and trading assets, such as commodities and stocks, is that you don’t own the underlying asset when you trade on a CFD.
You can still benefit if the market moves in your favour, or make a loss if it moves against you. However, with traditional trading you enter a contract to exchange the legal ownership of the individual shares or the commodities for money, and you own this until you sell it again.
CFDs are leveraged products, which means that you only need to deposit a percentage of the full value of the CFD trade in order to open a position. But with traditional trading, you buy the assets for the full amount. In the UK, there is no stamp duty on CFD trading, but there is when you buy stocks, for example.
CFDs attract overnight costs to hold the trades (unless you use 1-1 leverage), which makes them more suited to short-term trading opportunities. Stocks and commodities are more normally bought and held for longer. You might also pay a broker commission or fees when buying and selling assets direct and you’d need somewhere to store them safely.
Capital Com is an execution-only service provider. The material provided on this website is for information purposes only and should not be understood as an investment advice. Any opinion that may be provided on this page does not constitute a recommendation by Capital Com or its agents. We do not make any representations or warranty on the accuracy or completeness of the information that is provided on this page. If you rely on the information on this page then you do so entirely on your own risk.