Just Kitchen (JK) is an emerging cloud-based foodservice delivering hot and cold meals to consumers that currently operates in Taiwan and Hong Kong with plans to expand operations to other Asian countries. 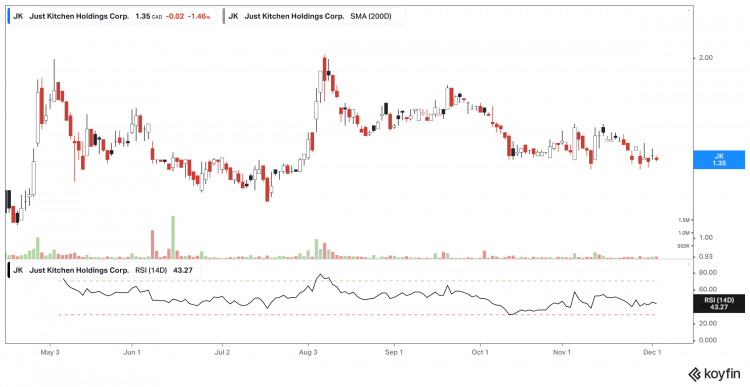 The company shares some similarities and differences with the likes of Uber Eats and Deliveroo, but the organisation seems to be ambitious enough to start partnering with household names such as TGI Fridays.

The company – ‘an app-to-door dining for the on-demand generation’ as it says on its website – has a competent team at the helm, including executives from Deliveroo and Uber and one of the founders, Kai Huang is also the original creator of the video game Guitar Hero.

Operating on a hub-and-spoke model, the firm combines it with online and mobile application-based food ordering fulfilled by third-party delivery companies, to minimize capital investments and operating expenses and reach more customers in underserved markets.

The firm has seen its share price soar by over 57% since its inception on the Toronto Stock Exchange (TSX) Venture Exchange in April this year.

Capital.com caught up with the company’s co-founder, chief executive and president, Jason Chen on the organisation’s growing appeal, challenges, and successes. 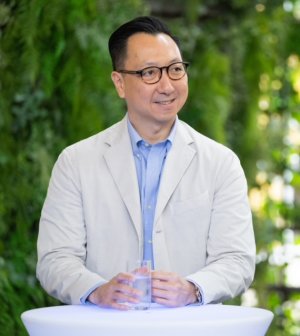 Just Kitchen has a very interesting concept – can you explain how it works?

Just Kitchen is a cloud-based food service. It works simply in that, the ingredients are prepped and then sent to our kitchens. Customers order food via our website. The order is then completed at the nearest kitchen to the customer and is then sent via bike to the consumer. Currently, we have 17 propriety brands developed in house, so these are virtual brands, no brick and mortar but just brands designed for delivery. What makes us different from other cloud kitchen operators, is that we self operate, meaning that we don’t hire out kitchens or share them. The other ten brands are brands that we are partners with like TGI Fridays or Paul cafe. We work with the local restaurants here in Hong Kong and everything in-between, everything from a one store with legacy and brand that’s Michelin star, right up to TGI Friday. So, we are content and infrastructure.

What is your forecast for growth and revenue?

We have been in operation for a year and a half. We did our first delivery in March 2020. Since then, we have grown significantly and we are at a runway of CAD20m ($15.5m), doing CAD1.6/1.7m a month and growing at 10-15%. Right now, we have 20 kitchens that are in operation, but we recently made two acquisitions that will take our kitchen count to 27. Each kitchen does about CAD100,000 a month and they are all pretty much the same, so that gives you an idea of our rate of expansion.

Which markets are you focusing on now and why?

We are focusing on Asia. Taiwan is a small island, highly populated and very dense with long culinary history and it is easy to move about between cities. We feel that this is a great place to prove our model. We are opening our second kitchen in Hong Kong, and we know the market and it’s a very dense small geographic area and Hong Kong has great disposable income. The average order size is higher than in Taiwan. We have a joint venture in the Philippines, which started about two months ago. Manila has 20 million people, again very dense, so that’s a market on a growth trajectory. It has a compound annual growth rate (CAGR) of 15% a year which is probably the highest in the world. So, these are the areas we are focused on. Also planning to enter Singapore and Malaysia.

You launched your initial public offering (IPO) this year; what did you use the money from the stake sale for?

We launched this year and we raised CAD10 million at the IPO and we used it to build our Taiwan infrastructure. Shortly after the IPO, on June 15, we had an offer to do a secondary offering as a build-operate-transfer (BOT) deal, that is when the underwriter guarantees the dollar amount. We had the support of Beacon Securities and Canaccord Genuity, which are Canadian firms, and they came on board with the financing, and it happened quickly after the IPO. They saw the growth in Asia, and they really wanted to double down in those regions, so the secondary financing which was CAD24mn helped with our expansion in Southeast Asia.

Any mergers or acquisitions on the horizon?

We have made two thus far and they are synergistic acquisitions or aqui-hires and we need the human capital and also the people who see our vision and business plan and can grow with us. The two opportunities that came up are cast operators. So, one kitchen was subdivided into 8 kitchens in one place and they obviously believed in the cloud kitchen space. The runway is huge, but a lot of players are getting into the market, and they just felt that they could grow better as a collective with us.

How do you see the industry changing?

The sector is still in its infancy and the runway is huge. There are a lot of different models out there and there are guys like us that do franchising and run their own kitchen. Where I see it eventually going is that it’s still food service, you still must make good food to succeed. You are cooking the food, getting it from satellite kitchen or hub, it then must go from where it was cooked, to a motorcycle, then to the hands of the customer and still be fresh and taste like something you ate at a restaurant. The sophistication of packaging and delivery speed – I think people are conquering those and so those are the things that will evolve – and the product will get better. Not unlike the FNB (food and beverages) business, I don’t think it’s a winner takes it all – so there’s a Macdonald’s, Burger King and Wendy’s. If you are delivering a good product regardless of what avenue you take, that’s what matters at the end of the day.

EUR/USD 1.08633
Trade
+0.120%
USD/JPY 130.212
Trade
-0.220%
GBP/USD 1.23191
Trade
-0.260%
AUD/USD 0.70515
Trade
-0.110%
GBP/JPY 160.407
Trade
-0.480%
The difference between trading assets and CFDs
The main difference between CFD trading and trading assets, such as commodities and stocks, is that you don’t own the underlying asset when you trade on a CFD.
You can still benefit if the market moves in your favour, or make a loss if it moves against you. However, with traditional trading you enter a contract to exchange the legal ownership of the individual shares or the commodities for money, and you own this until you sell it again.
CFDs are leveraged products, which means that you only need to deposit a percentage of the full value of the CFD trade in order to open a position. But with traditional trading, you buy the assets for the full amount. In the UK, there is no stamp duty on CFD trading, but there is when you buy stocks, for example.
CFDs attract overnight costs to hold the trades (unless you use 1-1 leverage), which makes them more suited to short-term trading opportunities. Stocks and commodities are more normally bought and held for longer. You might also pay a broker commission or fees when buying and selling assets direct and you’d need somewhere to store them safely.
Capital Com is an execution-only service provider. The material provided on this website is for information purposes only and should not be understood as an investment advice. Any opinion that may be provided on this page does not constitute a recommendation by Capital Com or its agents. We do not make any representations or warranty on the accuracy or completeness of the information that is provided on this page. If you rely on the information on this page then you do so entirely on your own risk.