JP Morgan stock forecast: Will it break the downtrend?

The JP Morgan (JPM) stock value has been declining since the start of 2022. Market participants have identified a potential turning point in the bank’s financial performance now that favourable pandemic-triggered monetary policies are set to fade.

Measures adopted by the US Federal Reserve (Fed) and hawkish comments from the central bank about an upcoming tightening have signalled that the strong earnings the company was able to produce in 2021 may not be replicated in the following years.

Last year, the bank’s results were upended by higher revenues from its investment banking unit. Now that market conditions are set to change, the environment could be less favourable for businesses looking to raise capital, directly affecting banking’s capacity to deliver positive growth in the short to mid-term.

The US bank once again ramped up its provisions for credit losses in expectation that the war between Russia and Ukraine might hurt performance of its exposed units.

“We've built 902m in reserves, driven by increasing the probability of downside risks due to high inflation and the war in Ukraine, as well as builds for Russia-associated exposures, and CIB [Corporate & Investment Bank] in AWM [Asset & Wealth Management],” said Jeremy Barnum, the bank’s CFO during the most recent post-earnings conference call with analysts.

Barnum also commented that their outlook for the US economy has shifted and that this build-up in the company’s reserves for credit losses was the result of a “slightly higher probability of a, you might call it, Volcker-style, Fed-induced recession in response to the current inflationary environment, which, obviously, is in part driven by commodity price increases, which are in part driven by the war in Ukraine.”

The markets reacted negatively to these comments and to the fact that JP Morgan missed Wall Street’s consensus earnings forecast for the first quarter of the 2022 fiscal year. Shares slipped more than 3% on the day the quarterly report was published. The price is down 7.5% this month, as of 19 April.

What might be expected from the JP Morgan stock performance in this challenging environment? In this article, we analyse the latest JP Morgan stock news along with its price action and fundamentals to outline plausible scenarios for the future. 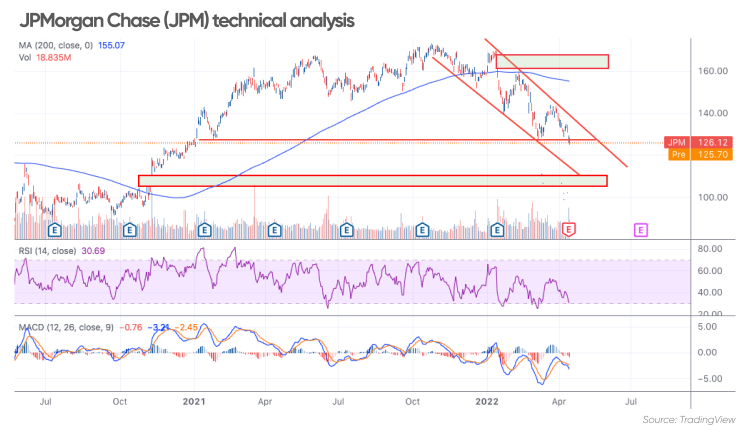 So far this year, as of 19 April, JP Morgan stock has declined more than 20% as war in Europe, an expected shift in the Fed’s monetary policy and the global supply chain crisis have weighed on the performance of bank stocks.

For institutions with exposure to financial markets such as JP Morgan’s investment banking and asset management units, the situation in Europe is a reason for concern. Market volatility tends to generate either lower revenues or unexpected losses for these segments of the business.

The possibility of an escalation in the war in Ukraine and the negative effect of such a development on asset prices could have an immediate impact on the company’s top and bottom-line performance.

The JPM stock chart above indicates that the price action has been on a downtrend since January this year after the Fed started to make hawkish comments in response to high inflation.

This downtrend has pushed the price below a crucial area of support found at the $125 level in the past couple of days – a break below this marker could lead to a sizable decline in the near term.

Momentum indicators have made lower highs, indicating a bearish outlook. The relative strength index (RSI) is at near oversold levels at 30.69.

Moreover, the moving average convergence divergence (MACD) has remained in negative territory and has already moved below the signal line, while negative histogram readings have progressively increased.

Overall, momentum remained negative for the JP Morgan stock value, as of 19 April. Could the decline continue or is a reversal possible?

“It has not been the best of years so far for JP Morgan Chase, with the stock price down almost 20% since the end of 2021. Of course, we need to see this against the background of an uncertain time for stocks markets and one where plenty of stocks has suffered similar fates so far this year. But overall that trend for JPM is still down – it has broken some major supports in this year's slide and is currently trading near its worst levels since January of last year.

“For now, the risk is that rallies could run into more selling – if the stock was to clear the $145 mark it could be a sign that the downtrend is finally changing. But for now, it would not be surprising for any bounces in the stock price prove to be short-lived and it slips lower in the weeks ahead.” 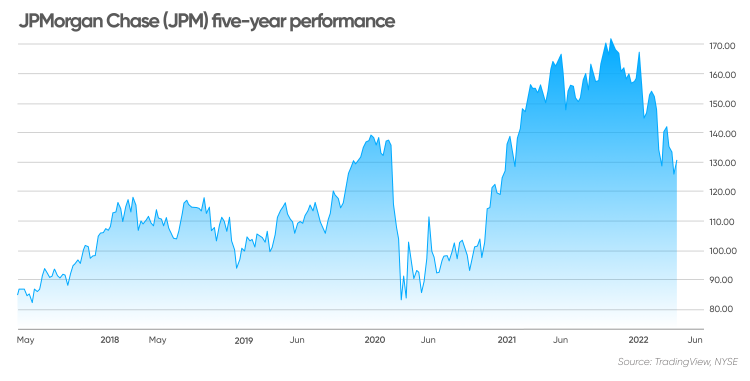 On 13 April, JP Morgan reported its financial results covering the first quarter of the 2022 fiscal year.

Total revenues during the three months to 31 March landed at $30.72bn, resulting in a 5% year-on-year decline. Higher negative revenues reported by the Corporate segment were partially responsible for this disappointing top-line performance, while the Corporate & Investment Bank unit also experienced negative revenue growth.

Investment banking fees suffered a 32% retreat compared to a year ago amid lower transaction volumes. Principal transactions were also 21% lower on a year-on-year basis.

What is your sentiment on JPM?

Give JPM a try

“We remain optimistic on the economy, at least for the short term – consumer and business balance sheets as well as consumer spending remain at healthy levels – but see significant geopolitical and economic challenges ahead due to high inflation, supply chain issues and the war in Ukraine,” said the bank’s CEO, Jamie Dimon.

JP Morgan increased provisions for credit losses during the period by $1.46bn compared to a reserve release of $1.53bn reported in Q1 2021. This led to a 42% decline in the company’s net income of 42% compared to the previous year’s first quarter.

Earnings per share landed at $2.64 compared to the $3.74 the company reported a year ago. The return on common equity took a strong hit, declining 1,000 basis points to 13%.

The stock is currently offering a 3.2% dividend yield. The company declared its latest dividend payment of $1 a share on 15 March this year. Dividends are paid quarterly.

Is JPM stock a ‘buy’, ‘sell’ or ‘hold’? The consensus recommendation for JP Morgan stock was ‘hold’, as of 19 April, according to the data compiled by MarketBeat. Nine out of 16 analysts currently rating the stock gave it a ‘hold’ rating, five considered it a ‘buy’ and one a ‘sell’.

The average JPM stock price target was set at $165, resulting in a 28% upside potential based on 18 April’s closing price of $128.46. Meanwhile, the highest JP Morgan share price forecast from analysts was at $200 and the lowest at $125.

Analysts’ actions following the release of the company’s latest quarterly report were mixed. For example, Argus and BMO Capital Markets lowered their price targets for the bank to $150 and $155, respectively, while Piper Sandler increased its 12-month JPM stock prediction to $170.

“Pre-provision net revenue was down only 15% year over year, and the bank still managed a return on tangible equity of 16%.” 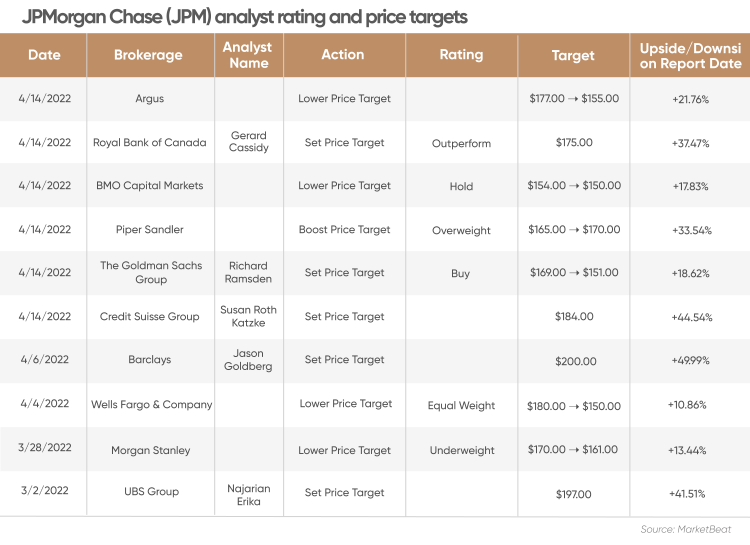 Wallet Investor had a bearish short-term outlook on JP Morgan stock, based on an assessment of its technical indicators. It expected the stock to decline to an average price of $123.003 on 3 May and slightly rebound to $140.401 by the end of 2022.

For December 2025, Wallet Investor held a bullish JPMorgan Chase stock forecast, expecting the stock to move up to $180.767. Although the service did not provide price targets for 2030, its five-year JPM stock forecast suggested it could hit $195.034 in April 2027.

When looking for JP Morgan (JPM) stock forecasts, it’s important to bear in mind that analysts’ and algorithm-based projections can be wrong. Their predictions are based on an analysis of the JPM historical stock price. Past performance never guarantees future results.

JP Morgan (JPM) is a robust financial institution with diverse revenue streams, strong capital buffers, and a well-reputed leadership team. The bank revealed a robust performance and attractive dividends at its latest earnings report on 13 April.

Whether JPM is a suitable asset for your portfolio depends on your own trading objectives and opinion, based on your own research. Remember, it’s important to reach your own conclusion about the company’s prospects and likelihood of achieving analysts’ targets.

The price of JP Morgan stock was expected to rise in the next one to three years, as indicated by predictions from Wallet Investor and GovCapital, as of 19 April. The consensus estimate from Wall Street analysts for the next 12 months was also positive.

A deterioration in the macroeconomic landscape along with rising geopolitical tensions in Europe have weighed on the valuation of bank stocks, including JP Morgan (JPM).

Capital.com JP Morgan stock forecast: Will it break the downtrend?