The launch of liquidity-boosting features at the decentralised cryptocurrency exchange Trader Joe have supported the platform’s token price over the past week, as it rebounded after falling to an all-time low at the end of January.

The utility token for Trader Joe is JOE. The coin price was $1.4031 at the time of writing on 7 February, more than double its all-time low of $0.6625 on 24 January 2022, according to cryptoassets price-tracking website CoinMarketCap.

Despite the increase in JOE coin prices over the past week, the token remained below its 16 January peak of $1.69. JOE coin hit an all-time high of $5.02 on 21 November 2021, less than three months after it started trading on exchanges.

Are you interested to learn more about the JOE cryptocurrency and JOE crypto future price trend forecast? Read this price analysis for the latest JOE crypto news and analysts’ JOE coin price prediction.

What is the JOE coin?

According to Trader Joe’s website, the project claims to be a “one-stop decentralised trading platform on the Avalanche network”.

Unlike other cryptocurrency exchanges, Trader Joe’s platform is decentralised, which means it operates without a central authority. Users of the exchange do not have to deposit their cryptocurrencies with Trader Joe to conduct peer-to-peer or wallet-to-wallet transactions. The exchange offers decentralised financial services such as swapping, staking and yield farming.

Avalanche, the blockchain network upon which Trader Joe is built, is an alternative to other networks such as Bitcoin, Ethereum and Polkadot. Avalanche claims the speed of transactions on its network is faster than its competitors and the costs are far lower than Ethereum’s gas fees. The utility token of the Avalanche network is AVAX.

JOE coin is used for the governance of the exchange. The project developers “envision Trader Joe to be a community governed protocol, such as a DAO (decentralised autonomous organisation)” and JOE token holders will be able to vote on community proposals.

In addition, holders of JOE coins are also rewarded with a share of the exchange revenues.

According to Trader Joe, the supply of JOE token is capped at 500 million and “there are no pre-sales, private sales or pre-listing allocations of the JOE token”.

According to CoinMarketCap, JOE currently has a circulating supply of 165.32 million coins and a live market cap of $220.7m.

All tokens will be distributed over 30 months according to the project’s emission schedule, from 3 July 2021 until 3 January 2024. The emission schedule at varying rates is set to take place on the third of every month. 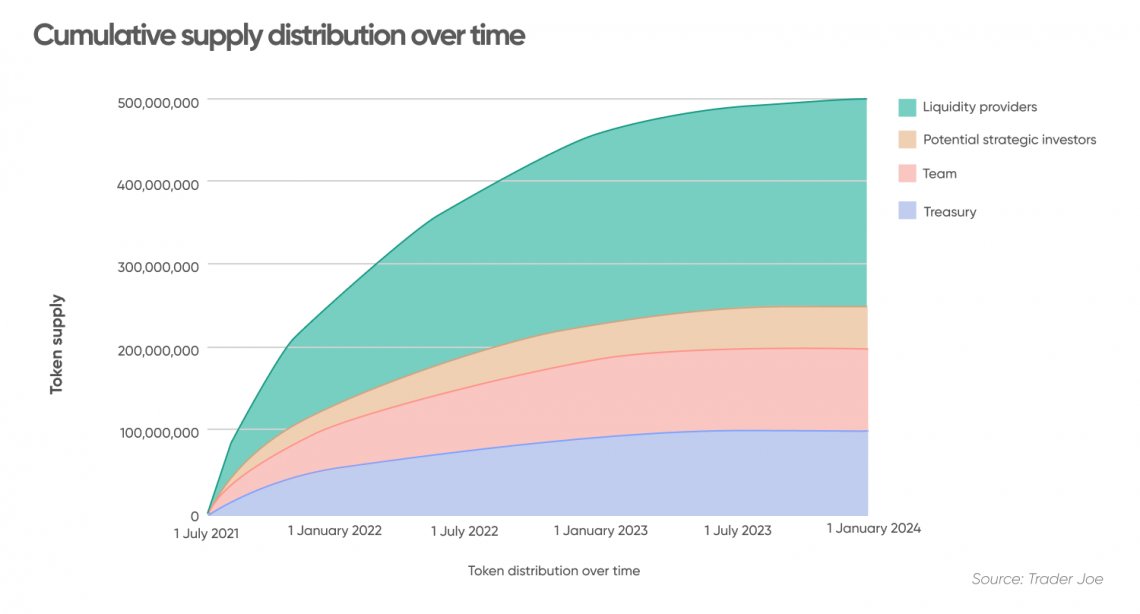 Half of the supply will be reserved for liquidity providers; the development team and treasury are each allocated 20% of the supply; while the remaining 10% is saved for potential strategic investors.

Who are the founders?

Trader Joe was founded in June 2021 by two developers who go by the pseudonyms OxMurloc and Cryptofish. Their vision was:

“To serve the community at the frontiers of DeFi by innovating, building fast and, most importantly, building securely. The ultimate goal of building a trading platform that provides users with a true ‘one-stop-shop’ DeFi experience.”

According to Trader Joe’s website, Cryptofish is a full-stack and smart contract engineer who was an early contributor to several Avalanche projects, such as Snowball and Sherpa Cash. He worked at Google and a centralised exchange specialising in derivatives. He holds a master’s in computer science from a US university.

Co-founder 0xMurloc is also a full-stack developer, specialising in product management. He has experience founding several startups and was recently a senior product lead at mobility service provider Grab. He holds a bachelor’s degree in electrical engineering from a US university.

The five team members listed on Trader Joe’s website all use pseudonyms with links to their Twitter accounts.

The Rocket Joe launchpad is the latest protocol, launched on 4 February.

The Launch of Rocket Joe marks a new dawn, transforming the Trader Joe platform into a hub for new DeFi primitives

According to the feature’s white paper, it is:

“A token launch platform where participants bid to provide liquidity for newly issued tokens. The platform enables price discovery and token distribution over a period of time before tokens are issued to the public market while discouraging front-running by bots.”

The JOE token farm is part of the ecosystem that rewards users for staking their JOE holdings in the exchange. When users stake their JOE tokens, they are exchanged for xJOE, which is periodically bought back by the exchange. The buyback is funded by 0.05% of every trading fee. According to Trader Joe, the buybacks currently happen every two days.

The platform has also launched Banker Joe, a lending protocol that allows users to borrow against collateral assets. According to the exchange, “the protocol has safety measures to restrict users from taking actions (such as borrowing more tokens or withdrawing collateral) that would cause them to exceed their borrowing limit”.

However, Trader Joe warned that this lending service is not risk-free, as borrowers “risk liquidation if they are unable to keep a leveraged trade open, which in turn places lenders at risk of being unable to withdraw their deposit”.

According to cryptocurrency research and data site IsThisCoinAScam.com, the Trader Joe project has a poor safety score of 4.5, as of 5 February 2022. The site awards JOE 7.17/10 on sentiment, 5.4/10 for volume, while other metrics (development, community, awareness and credibility) are awarded between 2 and 5. The scores are based on the site’s research on social media platforms such as Reddit and Twitter.

JOE coin is likely to be speculative because the token was only launched in September 2021 and remains in an early stage, so some aspects may not materialise.

Despite the early project risk, the Cayman Islands-based investment firm Genesis Block Ventures (GBV) believes Trader Joe’s strategy to modularise its utility token by expanding the use-cases of the cryptocurrency will add further value to the decentralised exchange.

The most recent Rocket Joe launch is set to be a launchpad and liquidity provider for newly issued cryptocurrencies.

According to GBV, the two main benefits of Rocket Joe are that:

Protocols launching from Rocket Joe will be able to raise a larger pool of liquidity, based on consumer demand for the issuing protocol token.

With a larger pool of liquidity being raised, this will discourage front-running bots, easing volatility and providing a favourable trading experience.

Another JOE token holder, John Flores, believes Rocket Joe “encourages people to hold JOE token for a much longer time in order to participate in other high-value, high-gain projects”.

According to analyst Wallet Investor’s JOE forecast, the data provider expected the average token price to fall to $0.106 in the next 12 months, below the all-time low of $0.6625 on 24 January 2022.

ZRX price prediction: Where will 0x trade next?

IOTX coin price prediction: What is the Internet of Things’ future?

EthereumMax price prediction: Where next for EMAX after Kim Kardashian settles SEC charge for $1.26m?