Is silver finally out of the woods as China reopens and the Fed slows its rate hikes?

Silver prices have risen more than 8% in the last month. This has led to investors wondering whether silver may finally be on the rise, following China slowly reopening its economy and the US Federal Reserve signaling a slowdown in its interest rate hikes.

Silver prices may finally be on the upswing 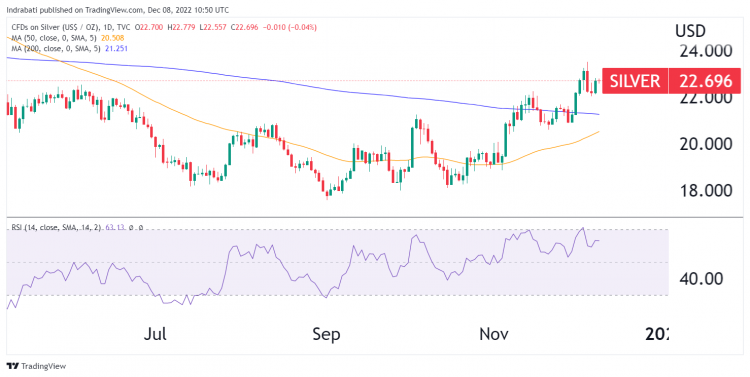 China has been announcing the lifting of some zero-COVID measures across several districts in Shanghai and Guangzhou, as a result of widespread and increasingly violent protests. This has been sparked by a high-rise building fire in Urumqi, resulting in the deaths of 9 people, due to a delay in emergency services.

Hong Kong has also announced that it may be doing away with the outdoor mask rule, as well as easing some COVID-19 testing requirements. Furthermore, Shanghai may also stop the requirement for COVID-19 tests for dine-in restaurants.

On December 7, US Treasury yields plunged, with the 10-year Treasury yields dipping below the crucial 3.5% mark, following investors showing renewed interest in bonds. This was sparked by the increased fear of nuclear war after Putin’s recent comments about the threat of nuclear warfare increasing. This has gone a long way in helping support silver prices.

A weaker US dollar (DXY) is also combining with lower US Treasury yields in order to provide a boost for key precious metals such as gold and silver, as economic uncertainty rises and investors move more towards safe haven assets.

However, next week’s US CPI data, which is due to be released on December 14 may prove to cap the gains seen by silver recently, as it will highlight how effective the US Federal Reserve’s current monetary policy tightening has been so far.

The FOMC meeting scheduled for December 15 is also expected to shed more light on the Fed’s plans for future rate hikes, as investors already price in another 50 basis points hike for this month.

Although this is definitely less than the 75 basis point hikes we have been seeing in the last few months, it is yet too early to tell whether this indicates that the end in the Fed’s hiking cycle is approaching.

More importantly, investors will have their eyes on the Fed’s projections for inflation, growth and interest rates for the coming year. As of now, the market expects about 50 basis points of cuts for the second half of 2023, however, in case the Fed hints towards higher interest rates for longer, metals such as silver may see some setbacks.

Silver prices were trading at about $22.7 per troy ounce at the time of writing, having briefly touched a more than 7-month high of about $23 per troy ounce last week, with a rise of about 20.6% since the lows seen on November 3. Silver also increased about 25.3% since mid-October.

According to Justin Mcqueen, senior market specialist at Capital.com, the silver outlook for December is not expected to change much. Last week, at the peak of the silver rally, we saw prices hitting about $23.37 per troy ounce, which also marks the 61.8% Fibonacci retracement level. 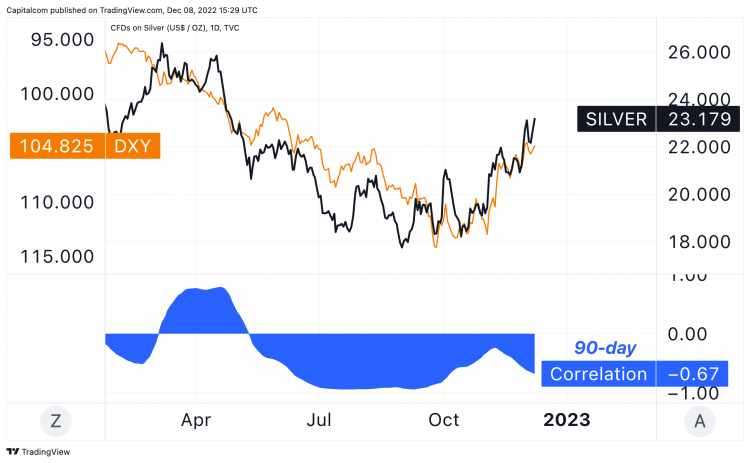 Silver had an inverse correlation with the US dollar this year – Credit: TradingView

The outlook for silver will depend upon several key factors. Firstly, investors are likely to keep a close eye on the progression of the Russia-Ukraine conflict, especially in light of Putin’s recent comments about nuclear war.

Things may also heat up considerably more in the coming months, as the EU’s ban of crude oil imports from Russia has already been implemented and will be followed by a refined oil products ban in February 2023. If this causes more geopolitical tensions, silver is likely to see more safe haven demand in the coming months.

Furthermore, investors are likely to watch the US Federal Reserve’s future rate hikes as well as how the US dollar reacts in the near future, for further indication about the direction precious metals such as silver may take. If there are definitive signs of inflation slowing down considerably in the coming year, silver may see some headwinds.

If the US dollar eases, silver may increase further. However, this is quite unlikely as the US dollar is likely to decrease only if the Fed becomes extremely dovish or if inflationary pressures decline or China sees a major boom in economic growth. As these scenarios are quite unlikely at this moment, the dollar is not likely to see much downside in the coming months, hence restricting silver’s upside as well.

Natural Gas 2.712
Trade
-5.430%
Oil - Crude 79.50
Trade
-0.050%
Gold 1926.20
Trade
-0.100%
Oil - Brent 86.13
Trade
-0.060%
Silver 23.731
Trade
+0.580%
The difference between trading assets and CFDs
The main difference between CFD trading and trading assets, such as commodities and stocks, is that you don’t own the underlying asset when you trade on a CFD.
You can still benefit if the market moves in your favour, or make a loss if it moves against you. However, with traditional trading you enter a contract to exchange the legal ownership of the individual shares or the commodities for money, and you own this until you sell it again.
CFDs are leveraged products, which means that you only need to deposit a percentage of the full value of the CFD trade in order to open a position. But with traditional trading, you buy the assets for the full amount. In the UK, there is no stamp duty on CFD trading, but there is when you buy stocks, for example.
CFDs attract overnight costs to hold the trades (unless you use 1-1 leverage), which makes them more suited to short-term trading opportunities. Stocks and commodities are more normally bought and held for longer. You might also pay a broker commission or fees when buying and selling assets direct and you’d need somewhere to store them safely.
Capital Com is an execution-only service provider. The material provided on this website is for information purposes only and should not be understood as an investment advice. Any opinion that may be provided on this page does not constitute a recommendation by Capital Com or its agents. We do not make any representations or warranty on the accuracy or completeness of the information that is provided on this page. If you rely on the information on this page then you do so entirely on your own risk.