News and Analysis News Commodities Is gold's $2,500 target still viable as the Fed ramps up hikes?

After a week of sharp declines, gold prices solidly rebounded following the Federal Reserve meeting, which increased interest rates by 25 basis points and pledged further six hikes by the end of the year.

Prior to the meeting, the market had already priced in seven rate rises this year, and the Fed broadly matched these expectations, by projecting the median interest rate at 1.9% in December 2022.

Aside from the Fed’s hawkish stance on rates, which was bolstered by the promise of a quicker quantitative tightening, what stunned the market was the acknowledgement of rising stagflationary fears.

“The implications for the U.S. economy are highly uncertain, but in the near term the invasion and related events are likely to create additional upward pressure on inflation and weigh on economic activity,” the Fed wrote in a 16 March press release

Fed Chair Jerome Powell reiterated that the board would use all available tools to bring inflation to target, and that the economy and labour market can withstand much tighter monetary policy.

How will the Federal Reserve’s hawkish stance affect gold prices in the coming months? How will the upcoming rate hikes alter Goldman Sachs’ latest prediction that gold prices would skyrocket to $2,500?

Tim Hayes, chief global investment strategist at Ned Davis Research, told Kitco.com that now is the time to be overweight gold as market volatility and uncertainty dominate. The expert thinks we are not yet in an environment where interest rates will pose a greater danger to gold, as long-term inflation expectations remain well-anchored and far from approaching the 1970s spiral.

According to Mark Chandler, Chief Market Strategist at Bannockburn Global Forex, the market believes the Fed is unlikely to accomplish the ideal "soft landing" scenario to reduce inflation without triggering a recession, as it failed to do so in the past. For gold, there may be potential toward $1,962 in the next day or two, he wrote in a recent note.

Lawrie Williams, writer at Sharps Pixley, believes gold is likely to recapture some of its former highs, owing to both geopolitical turmoil in Europe and the effect of inflation, which seems to be increasing before stabilising. Upcoming rising inflation data may be detrimental for the stock markets owing to what may lie ahead in terms of bringing inflation back under control.

Gold and oil go hand in hand as inflation hedges

Gold is progressively detaching from its strong negative link with interest rates in order to respond more sensitively to inflationary worries.

Gold has closely followed the direction of oil prices since the beginning of the Ukrainian crisis. When the price of oil WTI is compared to the price of gold, the correlation between the two assets has been almost perfect in recent weeks. 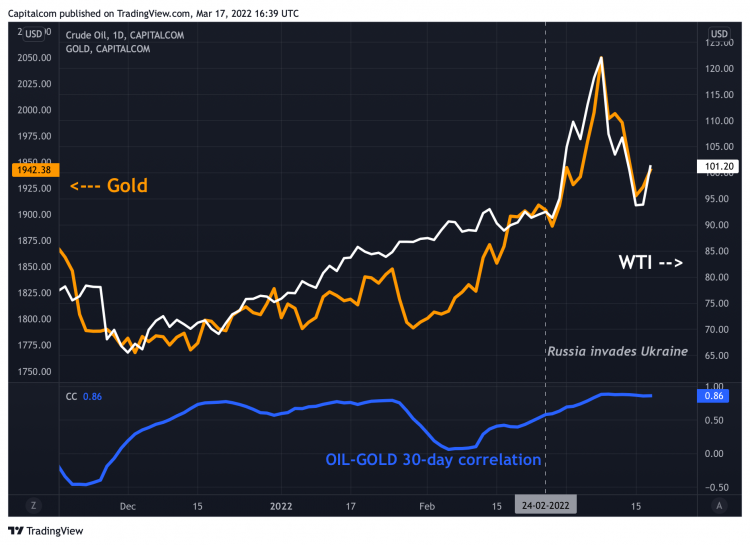 Gold and oil have moved hand in hand since the start of the war in Ukraine – Credit: Capital.com / Source: Tradingview

The drivers that contributed to an extremely tight correlation between gold and oil prices were primarily the threats of increased inflationary pressures caused by the energy crisis and growing geopolitical uncertainties.

In fact, gold is perceived as an inflation hedge by the market, as can be seen from its very close relationship with market-based inflation expectations (US 5-year breakeven rate). 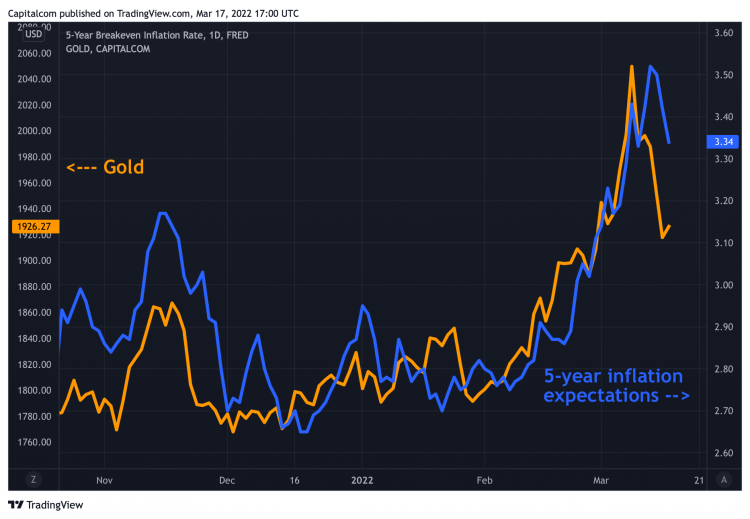 Is a hawkish Fed tone bad news for equity investment?

Will there be a supply crisis if the ban on Russian oil expands?

Capital.com Is gold's $2,500 target still viable as the Fed ramps up hikes?