The US initial public offering (IPO) business flopped up in the second quarter of 2022, with just $2.10bn (£1.71bn) in new stock issuance between both traditional IPOs and special purpose acquisition (SPAC) offerings, according to a new report from IPO research and investment products manager Renaissance Capital.

“We're watching that index closely because returns will need to improve before the IPO market picks up again.”

The majority of the IPOs that did price in the second quarter were small-cap stocks, as just six of the 21 total IPOs raised over $100m, including a scheduled $174m offering from Ivanhoe Electric (EI) set to price next week.

“Issuance was sluggish from the start and pulled back further in late May, as recession fears were heightened by record inflation numbers,” noted Renaissance Capital CEO Bill Smith in a quarterly review. “Micro-caps accounted for the majority of deal flow, as a result, the median deal size shrank to $22 million, a multi-decade low.”

What is your sentiment on IPOus?

US IPO issuance volume by quarter 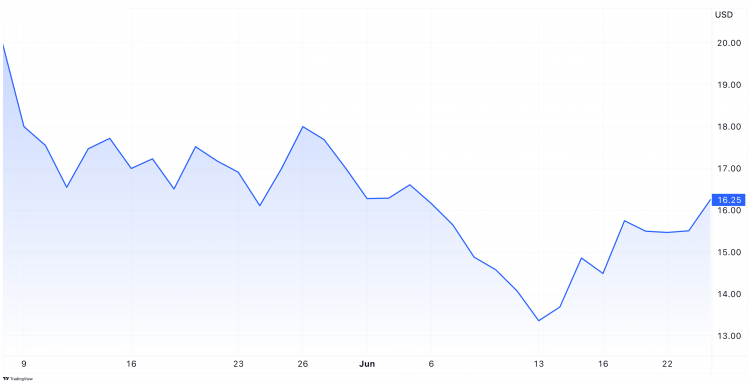 Bausch + Lomb was the largest IPO to price in the quarter, raising $630m at $18 per share, valuing the eye-care unit of Bausch Health (BHC) at $6.50bn upon completion of the spin-off. Bausch + Lomb stock has lost 9.89% since its 5 May IPO currently trading at $16.43. Bausch + Lomb trades on the NYSE under the ticker BLCO.

In late March, the US Securities and Exchange Commission proposed enhanced disclosure requirements for an increased number of parties in a SPAC IPO transaction.

“The SPAC market continued to collapse with just 14 blank-cheque IPOs and 17 merger completions,” added Smith. While several large IPOs in the pipeline updated their filings during the quarter, new filings sank to a six-year low.”

“New issuers are still waiting for better conditions, and meaningful IPO activity is unlikely to resume until returns improve.”

The Palantir revenue outlook has an upside: here’s why