Stock markets across the globe suffered a sharp sell-off in late January and early February. While it was assumed fears of the impact of rising inflation on the pace of US rate hikes was the trigger, the sell-off was exacerbated by exchange-traded products based on volatility measures, a new report finds

The wobble has shaken off some positions - the equivalent of pressing a ‘reset’ button - but the overall picture has not fundamentally changed
by Claudio Borio, Bank for International Settlements

The latest Quarterly Review from the Bank for International Settlements (BIS) says that the sharp correction in stock markets punctured a long period of unusual calm and was sparked by anxiety about the US inflation outlook and its likely effect on interest rates.

The volatile reaction by the markets underlined to global central banks the knotty problem facing monetary authorities as they move towards policy normalisation, but also how much risk investors have taken on during the long period of low volatility.

“No doubt, the wobble has shaken off some positions - the equivalent of pressing a ‘reset’ button - but the overall picture has not fundamentally changed,” said Claudio Borio, head of the Monetary and Economic Department of BIS.

Indeed, it now appears that the rise in volatility - rather than just being a consequence of the sell off - may have contributed to the severity of the sell-off.

Wall Street's so-called "fear gauge" - the CBoE Vix index - jumped 20 points on Monday 5 February. It jumped a further 20 points on the Tuesday, before falling back sharply to end that day lower.

Vladyslav Sushko and Grant Turner at BIS say model estimates show that the rise in the Vix on these days far exceeded the change in expectations about future volatility. 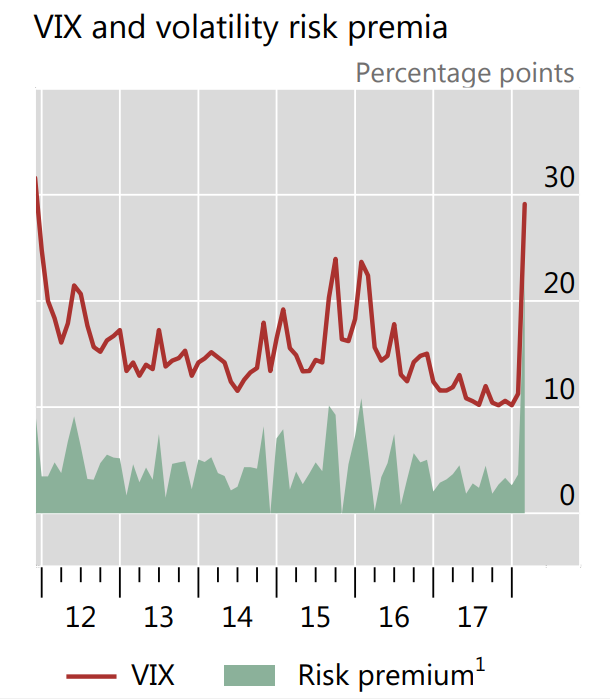 "The magnitude of the risk premium suggests that the Vix spike was largely due to internal dynamics in equity options or Vix futures markets," say Sushko and Turner.

Since the financial crisis, the use of Vix futures has gained momentum - particularly with the rise in issuance of exchange-traded products (ETPs) that are used to either hedge or speculate on volatility.

There are basically two types of product: 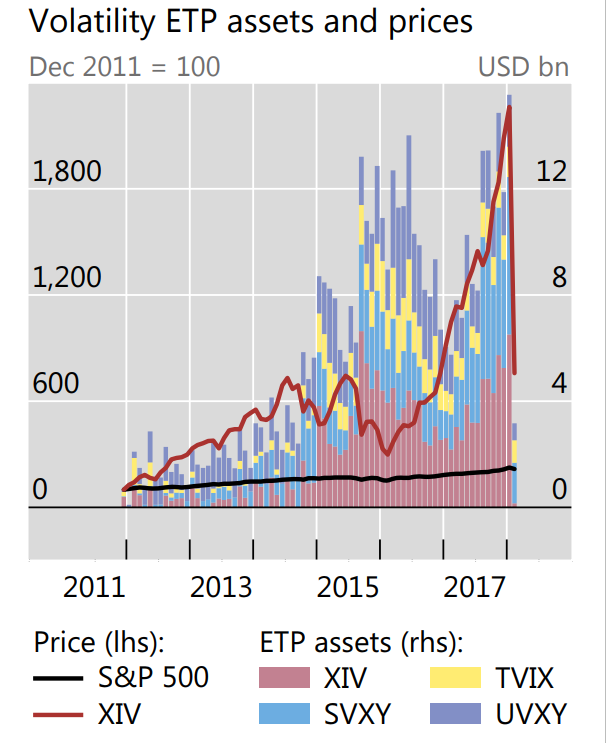 "Although marketed as short-term hedging products to investors, many market participants use these products to make long-term bets on volatility remaining low or becoming lower," say Sushko and Turner.

11,963.60 Price
-0.470% 1D Chg, %
Trade Now
Swap short:
Swap long:
Trade Now
Given the historical tendency of volatility increases to be rather sharp, such strategies can amount to 'collecting pennies in front of a steamroller'
by Vladyslav Sushko and Grant Turner at BIS

The assets of select volatility ETPs have expanded sharply over recent years. BIS research estimates that assets in such products have reached about $15bn by the end of 2017.

Sushko and Turner add: "Given the historical tendency of volatility increases to be rather sharp, such strategies can amount to 'collecting pennies in front of a steamroller'."

The BIS report says: "Due to the mechanical nature of the rebalancing, a higher Vix futures price necessitated even greater Vix futures purchases by the ETPs, creating a feedback loop."

Sushko and Turner explain that many derivatives dealers hedged their exposure from selling Vix futures to ETPs by shorting S&P 500 futures, which put downward pressure on equity markets.

On 5 February the S&P 500 index fell 4.2% as the Vix index surged more than 100% to levels seen only once since the financial crisis.

Sushko and Turner conclude: "Overall, market developments on 5 February were another illustration of how synthetic leveraged structures can create and amplify market jumps, even if the core players themselves are relatively small.

"For investors, this was also a stark reminder of the outsize risks involved in speculative strategies using complex derivatives."