How many Luna Classic coins are there? LUNC crypto circulation analysis

The catastrophic meltdown of the Terra ecosystem in May 2022 hit the crypto market hard. The crisis began when UST, Terra’s algorithmic stablecoin, lost its dollar peg and sent LUNA, its sister token, into a hyperinflationary spiral.

After being among the top 10 tokens in the cryptocurrency market, the value of both tokens fell to nearly nothing in less than a week, wiping away billions of dollars in investor capital.

Do Kwon, Terra’s founder, suggested a hard fork to revitalise the Terra Blockchain. Since the hard fork, Terra's native currency has been renamed Luna Classic (LUNC) and a new chain called Luna (LUNA2) has been formed.

Several stakeholders are currently working to revive the project through the “burning of LUNC supply” and other means.

Before diving into further details, let’s answer the question, how many luna classic coins are there? We will also look at LUNC’s tokenomics, and other factors to understand possible future trajectories for the coin.

What is Luna Classic and how does it work?

Do Kwon and Daniel Shin introduced the Terra blockchain in January of 2018, and in early 2019 held an initial coin offering (ICO) for LUNA. After a period of exceptional success, the coin rose to become one of the top 10 biggest cryptocurrencies in the world.

However, at the beginning of May 2022, the TerraUSD (UST) stablecoin lost its peg to the US dollar and plummeted along with its sibling token, LUNA. It also hit the cryptocurrency market, ushering in an extended crypto winter.

To resurrect the blockchain, Do Kwon designed a recovery plan that called for the Terra chain to undergo a hard fork and split into two chains, with the new chain devoid of stablecoins. Terra validators accepted the proposal on 25 May 2022, and Terra 2.0 was released on 28 May 2022.

Luna Classic (LUNC) has replaced Terra (LUNA2) as the native currency of the previous chain. It was released on 28 May 2022 following the fork and the production of the genesis block on the new chain. LUNC is the old network's native governance and utility token. It operates on a proof-of-stake (PoS) consensus mechanism.

LUNC preserves all the characteristics of the original Terra Luna coin and continues to serve as a tool for the Terra Classic stablecoin, TerraUSD (USTC).

Through the protocol's algorithmic market module, LUNC is responsible for maintaining the price of USTC, an algorithmic stablecoin. When the price of UST becomes too high or too low, the module encourages the burning of UST to mint LUNC or vice versa. This serves to reduce price volatility.

After the governance proposal mandating a 1.2% tax on each transaction was approved in late September, a massive LUNC burn is now underway. The objective is to decrease its supply and boost demand.

What is your sentiment on LUNA2/USD?

How many Luna Classic coins are in circulation?

How many Luna Classic coins are there? According to statistics from CoinMarketCap, LUNC's supply was capped at 6.9 trillion tokens, as of 5 October, with a circulating supply of 6.15 trillion coins in total. As of 5 October, LUNC was trading at $0.0003085 and had a market capitalisation of $1.66bn. 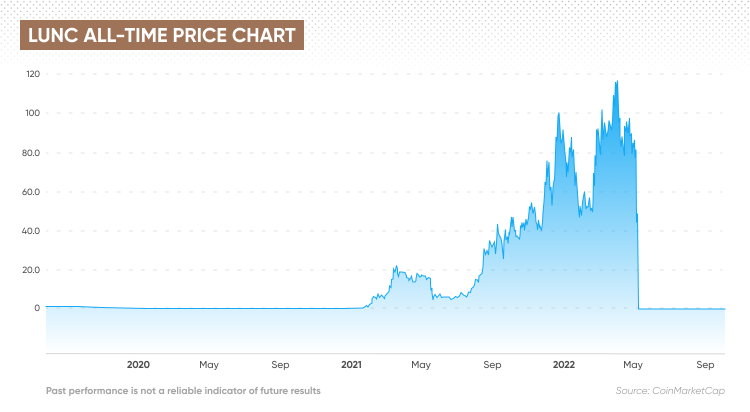 Binance completed the first Terra (LUNA) airdrop allocation to Terra Classic (LUNC) and TerraClassicUSD (USTC) to holders in May 2022. The action was meant to offer a partial refund to wallets holding its native LUNA token or UST stablecoin, which were nearly worthless in May.

Terra Luna Classic holders who did not get the right amount of tokens during the project's initial "Phoenix" airdrop on 28 May could participate in the second drop. Claims went online on 4 September and ended on 4 October. The airdrop has been allotted around 19.5 million tokens.

Since LUNC has an exponentially large circulating supply, several stakeholders, including exchanges like Binance, are taking aggressive steps to restrict LUNC supply.

Consequently, Binance has deployed a burn mechanism that will transfer all trading fees on LUNC spot and margin trading pairs to the LUNC burn address, resulting in their destruction. Sending a token to an uncontrolled cryptocurrency address is equivalent to burning it. This eliminates coins from circulation, stimulating price action.

Although LUNC is being burned on a limited basis via the daily collection of taxes, burning a huge number of tokens is essential to achieve the rapid restoration of Luna Classic.

Who owns the most Terra Classic crypto?

Is there a top holder of Terra Classic? As of 5 October, TerraForm Labs had amassed 432.71 million LUNC tokens, making them the largest holder of terra classic, according to the Luna Rich List.

The owner of the second-largest wallet, which had 67.48 million tokens, was unidentified. Binance had the third-largest terra classic tokens, totalling 29.23 million coins.

Due to unfavourable market sentiment, the Terra Luna Classic price remained considerably below its all-time high for many months following its rebranding.

LUNC rebounded once its tax burn plan was accepted, and went live on 21 September 2022. The tax absorbs 1.2% of all LUNC payments, reducing LUNC supply whilst increasing demand.

Binance's declaration on 26 September 2022 to burn all trading fees on LUNC spot and margin trading pairings boosted the price of Luna Classic. Within a few hours, the LUNC price increased by nearly 80%, from $0.0001825 to $0.0003272, according to CoinMarketCap.

Meanwhile, INTERPOL has allegedly ordered law enforcement authorities to identify and arrest Do Kwon, who has been accused of operating a Ponzi scheme. As a result, it's difficult to predict whether LUNC will actually rise from the ashes or merely crash and burn.

While it is vital to be aware of these LUNC facts, they should not be used as a replacement for your research. Keep in mind that high-risk crypto markets are very volatile.

Before trading, always complete your own due diligence by researching the latest news, technical and fundamental analysis, and a broad range of analysts’ opinions.

Keep in mind that past performance is not a reliable indicator of future results. And never trade with money you can't afford to lose.