Traders have continued to pull back from popular 2022 trades amid the unwinding of long USD, short equities (tech in particular) and short bonds. This of course had picked up since the release of last week’s US CPI report, while China’s baby steps towards reopening provided a further boost. However, as I mentioned in my Euro piece in yesterday’s report, I believe the sell-off in the USD is somewhat overdone in the short-run and with various assets edging towards their longer-term moving averages in the form of the 200DMA, I would expect this area of resistance to hold on its first test. This also applies to gold, which is trading at its highest level since August and within close proximity to its 200DMA situated at 1803. Two factors that have notably underpinned the precious metal, are a softer dollar and a move lower in real yield.

Alongside this, positioning has likely played a part in exacerbating the upside in gold with the latest COT data showing that a sizeable amount of gross shorts had been covered in the reporting week to November 8th. What’s more, a net short position in gold is somewhat of a rarity as traders have flipped net short only six times in the last 10 years. Generally, when this has occurred risks have often been geared to the topside with Gold averaging returns of over 7% in the following 3-months. 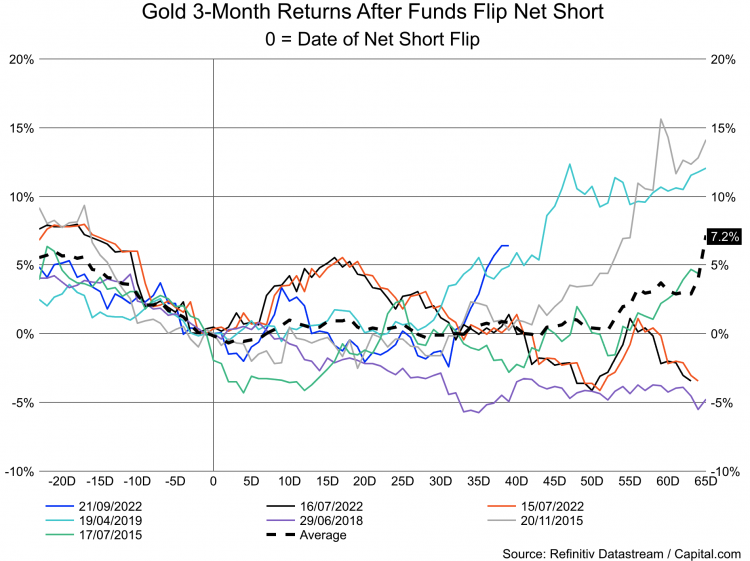 That being said, there are critical topside hurdles that will likely provide a challenge in the short run. The aforementioned 200DMA, which is also where the 55-100WMA resides as well as the August highs. As such, there is a risk of a pullback from 1800-10, particularly with momentum indicators showing that gold is heavily in overbought territory. Meanwhile, on the downside, support is situated at 1760-65. 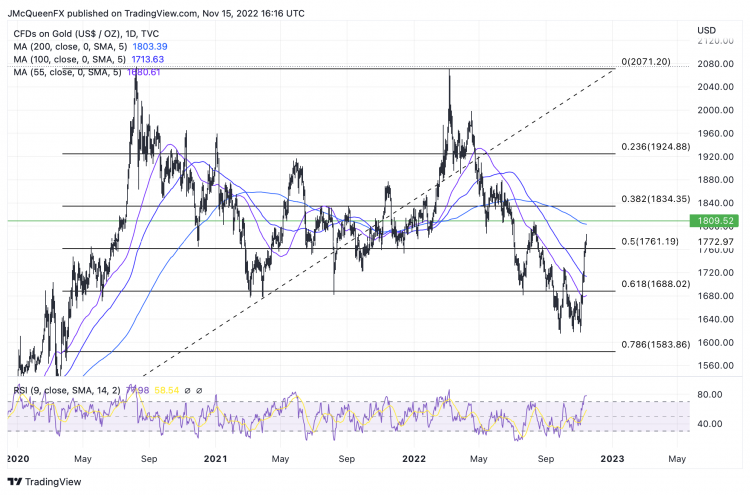 Natural Gas 2.411
Trade
-2.390%
Oil - Crude 73.41
Trade
-3.570%
Gold 1865.37
Trade
-2.480%
Oil - Brent 79.77
Trade
-3.000%
Silver 22.377
Trade
-4.780%
The difference between trading assets and CFDs
The main difference between CFD trading and trading assets, such as commodities and stocks, is that you don’t own the underlying asset when you trade on a CFD.
You can still benefit if the market moves in your favour, or make a loss if it moves against you. However, with traditional trading you enter a contract to exchange the legal ownership of the individual shares or the commodities for money, and you own this until you sell it again.
CFDs are leveraged products, which means that you only need to deposit a percentage of the full value of the CFD trade in order to open a position. But with traditional trading, you buy the assets for the full amount. In the UK, there is no stamp duty on CFD trading, but there is when you buy stocks, for example.
CFDs attract overnight costs to hold the trades (unless you use 1-1 leverage), which makes them more suited to short-term trading opportunities. Stocks and commodities are more normally bought and held for longer. You might also pay a broker commission or fees when buying and selling assets direct and you’d need somewhere to store them safely.
Capital Com is an execution-only service provider. The material provided on this website is for information purposes only and should not be understood as an investment advice. Any opinion that may be provided on this page does not constitute a recommendation by Capital Com or its agents. We do not make any representations or warranty on the accuracy or completeness of the information that is provided on this page. If you rely on the information on this page then you do so entirely on your own risk.