Glencore shares ended 2020 virtually unmoved. Although the pandemic disrupted some of the company’s operations with the price of certain commodities plunging, it has also resulted in a tailwind for others such as gold and silver, both of which reached all-time highs last year.

The stock started 2021 on a positive note, moving 18.9 per cent higher since the year began. A strong recovery in the price of crude along with high prices of precious metals could boost the firm’s financial performance at short notice.

Now, with the price of Glencore shares already surpassing pre-pandemic levels, the following Glencore share forecast aims to give a closer look at the firm’s upside potential ahead of its 12-month production report for the year ended December 31, 2020, which will be released in a couple of weeks.

The price of Glencore shares had already been declining before the current crisis struck. It moved from the low 400s in early 2018 to nearly 200p per share a few days before the World Health Organisation (WHO) officially categorised the Covid situation as a pandemic.

During March, the price collapsed to the low 100s but then bounced strongly off those lows. It is now nearing the 300p level in a striking recovery for the British trading and mining company.

The question remains, what is fuelling the current recovery in Glencore shares and how can those drivers affect our Glencore stock forecast?

Truth is, Glencore is such a diverse company, with interests in trading and mining multiple commodities including – but not limited to – gold, silver, zinc, oil, and copper which increases the complexity of narrowing down the reasons behind the latest uptick.

However, one interesting factor jumps to the table when analysing the correlation between the price of the stock and the price of certain commodities.

Based on my findings, I see that the price of three commodities in particular helps to explain the price of Glencore shares. These are oil, zinc and copper. 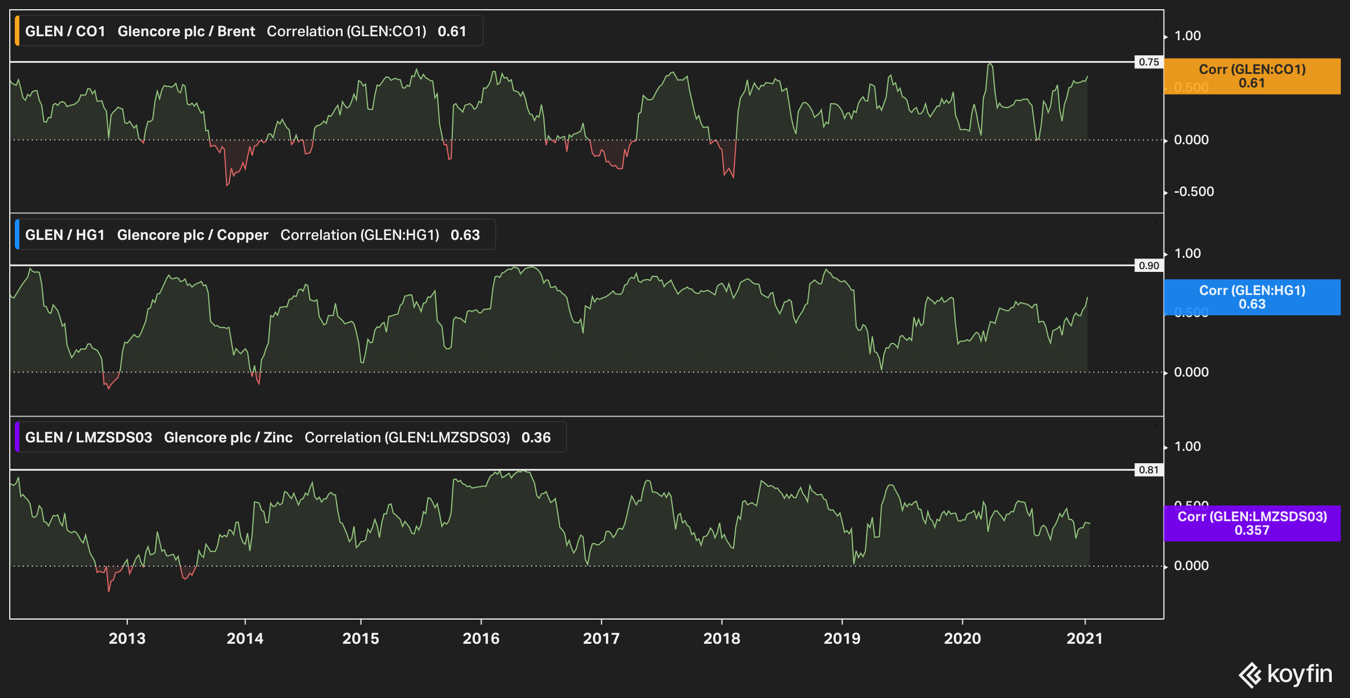 The chart above shows how these three commodities have maintained a strong correlation with the price of the stock, in some cases topping at 0.75 for oil, 0.9 for copper, and 0.81 for zinc.

All of those correlation levels remain strong, although zinc has slipped well below 0.7 for now. This is usually the minimum threshold required to consider the performance of one asset as strongly correlated to the performance of the other.

Based on these correlations, we could maybe extrapolate the short-term forecasts of oil – as tracked by the price of Brent crude – along with those for copper prices to possibly understand where Glencore shares may be heading on short notice. 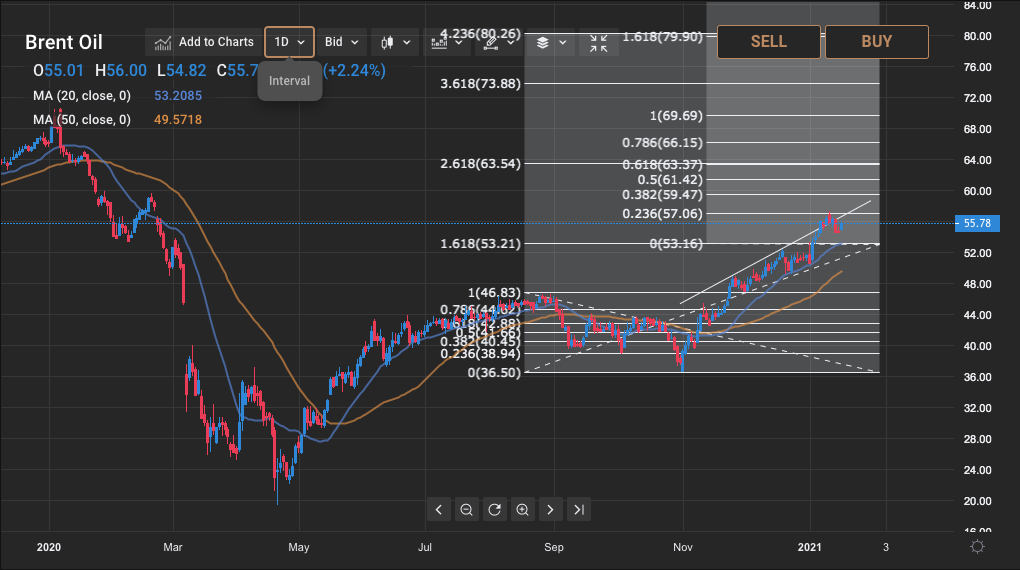 Starting with oil, the chart above shows how the price of Brent crude has been on a strong uptrend since the market was buoyed by the reported efficacy of the Pfizer vaccine. The price per barrel gained nearly 40 per cent since then as traders continue to be optimistic about the prospect of a virus-free world.

That said, the price has been on a steady uptrend and seems to be currently aiming to reach the $58 level indicated by the Fibonacci extension shown in the chart as long as vaccines remain effective against any new strains of Covid.


This 3.4 per cent potential upside for oil could boost the price of Glencore shares by at least 2 per cent in the short term if that target is achieved – possibly pushing the price to 280p per share. 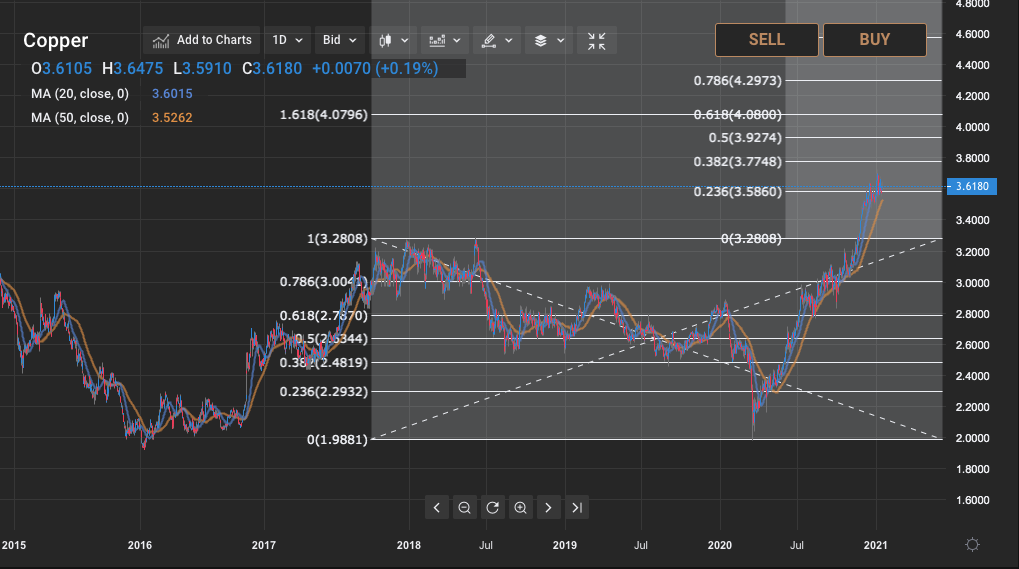 Meanwhile, copper prices keep advancing strongly on the back of higher demand from China. The country was possibly the first to step out of the Covid crisis, which resulted in a strong rebound in its manufacturing capacity and demand for copper.

As of today, the price of copper ended the session at $7,993 per metric ton and a 12-month forecast from American investment bank Goldman Sachs sees the metal rising to as much as $9,500 during 2021.

Taking into account the bullish backdrop provided by potentially higher oil and copper prices in the near future, a plausible short-term Glencore share price prediction could see the stock soaring to the 300p level in the following weeks as long as commodity prices keep responding positively to vaccinations.

Nearly 17 of the 26 analysts covering Glencore, as reported by Yahoo Finance, currently consider the stock a buy, which reinforces this short-term bullish outlook on the stock.

As of now, not a single analyst believes that the stock is a sell, probably based on the fact that commodity prices will continue to recover as the virus situation progressively subsides.

Meanwhile, the consensus price target for Glencore is 241.90p, with the highest target currently sitting at 345p per share – given by Barclays – while the lowest remains at 180p per share – from Credit Suisse.

Interestingly, both Morgan Stanley and Barclays maintained their 12-month price targets for the firm during January, with the American bank seeing the shares reaching 274p – a target that is only 0.25p higher than today’s closing price. Glencore shares have started the year strongly and the fact that commodity prices have continued to surge on the back of vaccinations keeps supporting a bullish thesis for the stock.

That said, there is a material risk that once the virus situation is over on a global scale, commodity prices could suffer a short-term pullback. This is because the market may have already priced in such recovery and traders could end up stepping away from the table to take home the profits they have made during the post-pandemic rally.

If that were to happen, the drop would result in a short-term plunge in the price of Glencore shares, although such a move will likely be short-lived.

Read more: Netflix share price forecast for 2021: should you buy the stock after its Q4 earnings?