Euro not so strong

GBP/EUR forecast: Will the revival last?

The pound to euro (GBP/EUR) exchange rate has rebounded in the last month after falling into a decline since peaking at 1.2190 in March. It briefly fell below 1.15 in June before rebounding to a high point 1.19 on 28 July.

The GBP/EUR forecast is looking mixed heading towards the end of summer.

The European Central Bank’s (ECB) promise to address surging borrowing costs in some of the weaker eurozone economies, while simultaneously raising interest rates, may prove to be troublesome. Meanwhile, on 4 August, the Bank of England (BoE) has increased interest rates by 0.5 percentage points to 1.75%, the highest rate in 14 years.

The GBP/EUR has been stuck in a range between 1.1000 and 1.2000 since the 2016 EU referendum. In the immediate aftermath of the Brexit vote, the exchange rate fell briefly to below 1.0600 as investors contemplated what leaving the EU meant for the UK economy.

The coronavirus pandemic also caused severe damage to both the UK and the eurozone economies, although the swift fiscal response from the UK government and its faster vaccinations programme ensured lockdowns in the country ended sooner.

Pent-up demand in the UK following the end of the lockdowns both lifted the economy and boosted inflationary pressures, leading to the pound outperforming the euro at the start of 2021.

However, the first half of 2022 has been a totally different story. At the time of writing on 5 August, the GBP/EUR was down around 0.24% year-to-date (YTD), while GBP/USD was down more than 10%.

What is your sentiment on EUR/GBP?

Give EUR/GBP a try

In March, it looked like sterling would build more supremacy over the euro as the exchange rate attempted to break away from the 1.2000 region. Sentiment was positive towards GBP amid a stronger economy and tight labour market. The BoE had already started raising interest rates at the back end of 2021, with the promise of more to follow.

However, the GBP/EUR advance retreated sharply after multiple economic indicators started to deteriorate towards the end of the first quarter, pointing to a sharp slowdown in the UK economy and raising fears of stagflation.

The weakness was confirmed by data from the Office for National Statistics (ONS) showing the UK economy grew by 0.5% in May after a decline of 0.2% in April.

Services grew by 0.4% in May and was the largest contributor to GDP growth, primarily due to growth in human health activities, which increased by 2.5% following a fall of 7.6% in April 2022. Growth in the sector in May 2022 was mainly driven by a large rise (15%) in GP appointments in England.

Inflation has been making the situation worse. After climbing above the BoE’s 2% target in May 2021, the Consumer Price Index (CPI) has gradually risen higher, reaching 4.8% by the end of the year as pandemic lockdowns disrupted supply chains.

Inflation since then has been even more profound, with prices hitting multi-decade highs repeatedly throughout 2022. By April, the CPI’s annual rate had climbed to 9.0%, starkly different from the annual 7.0% rate recorded for March. May then showed a 9.1% increase, with June marking a 9.4% annual rise – a new 40-year-high

High inflation is a reflection of large increases in global energy prices. This has been exacerbated by the Russia-Ukraine war, which also put significant upward pressure on wholesale prices of many agricultural commodities.

Euro not so strong

The euro, like most other major currencies, has done well against the British pound and the Japanese yen (JPY). Against the US dollar, the euro was down 10.03% YTD. The currency has been affected by the war in Ukraine and held back in part due to surging energy and agricultural prices.

Rising prices have hit consumer pockets and company profits. As a result, investor sentiment has deteriorated sharply – and remains low – since Russia invaded Ukraine in February 2022.

Germany’s ZEW Indicator of Economic Sentiment stood at minus 53.8 points in July, after tumbling by 25.8 points. The figure is the lowest since December 2011, falling well below market expectations of -38.3.

More signs of weakness in the eurozone emerged. Inflation continued to accelerate to new record highs as Russia’s military involvement in Ukraine continued to disrupt trade, leading to shortages of materials, as well as high energy and commodity prices.

Accelerating inflation means that like most other central banks around the world, the ECB is growing more hawkish, with several members of the bank’s Governing Council pushing for higher interest rates.

At its June policy meeting, the ECB decided to end net asset purchases under its asset purchase programme (APP) as of 1 July, and raise interest rates by 25 basis points in July and September, with the anticipation of further gradual increases in interest rates thereafter.

Instead of boosting the euro, the ECB’s decision undermined equities as investors fretted over tighter monetary conditions in the months ahead, with economic output likely to remain subdued and inflation buoyant.

The GBP/EUR fell as the ECB turned more hawkish, with the pound remaining the weaker of the two currencies. Rising expectations over interest rate hikes also made any GBP/EUR prediction difficult for analysts. 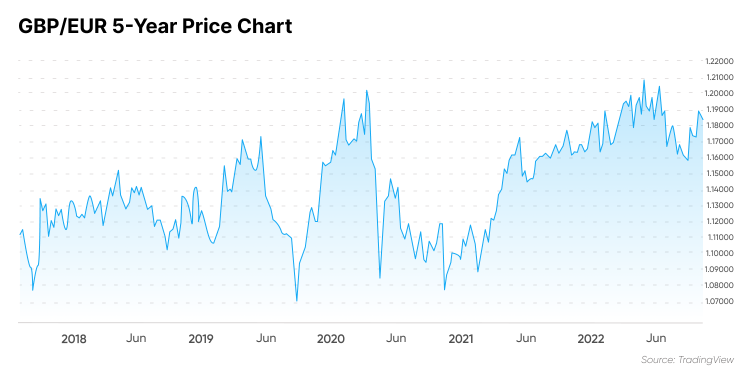 According to Fawad Razaqzada, a market analyst at City Index, the GBP/EUR forecast for the months ahead is a positive one. He said:

“As we look ahead, the GBP/EUR could rise back towards its recent range highs of around 1.20 or so. The pound has already sold off and much of the downside risks have now been priced in. With the BoE promising to take a more forceful action against inflation, the pound’s downside should be limited from here, especially against currencies where the central bank is somewhat less hawkish than the BoE.”

On 5 August 2022, analysts at Dutch bank ING said that the BoE could take more aggressive steps to rein in inflation at its September meeting:

“The BoE policy rate could well be moving to 2.25% in September and a 150bp spread over the ECB policy rate should prove some insulation for sterling – at least against the beleaguered euro.”

According to Razaqzada, the European Central Bank faces more problems down the line, which should keep the euro undermined, suggesting that the pound to euro forecast is positive:

“The ECB’s promise of addressing surging borrowing costs in some of the weaker eurozone economies while simultaneously raising interest rates, may prove to be troublesome and struggle to find that extra flexibility it is looking for. This should prevent the euro from rising too much relative to other, stronger currencies.”

It should be noted that the pound to euro forecast is subject to change depending on the outcome of upcoming economic data from both regions, with the focus being on inflation figures, which are difficult to predict. The GBP/EUR forecast for 2022 as a whole can look a lot different in a few months’ time and it’s even harder to make any accurate GBP/EUR forecasts for 2025 and 2030.

Analysts’ forecasts should not be used as substitutes for doing your own research. And remember never to invest more money than you can afford to lose.

Capital.com GBP/EUR Forecast | Will GBP/EUR Go Up or Down?