GBP/JPY outlook: Where is the pair now?

GBP/JPY prediction: What are analysts saying?

The GBP/JPY pair is one of the world’s most popular cross-currency pairings, with both currencies numbering among the top 10 most traded in the world.

In this article, we will answer these questions and look at what to consider when trading the GBP versus the JPY. 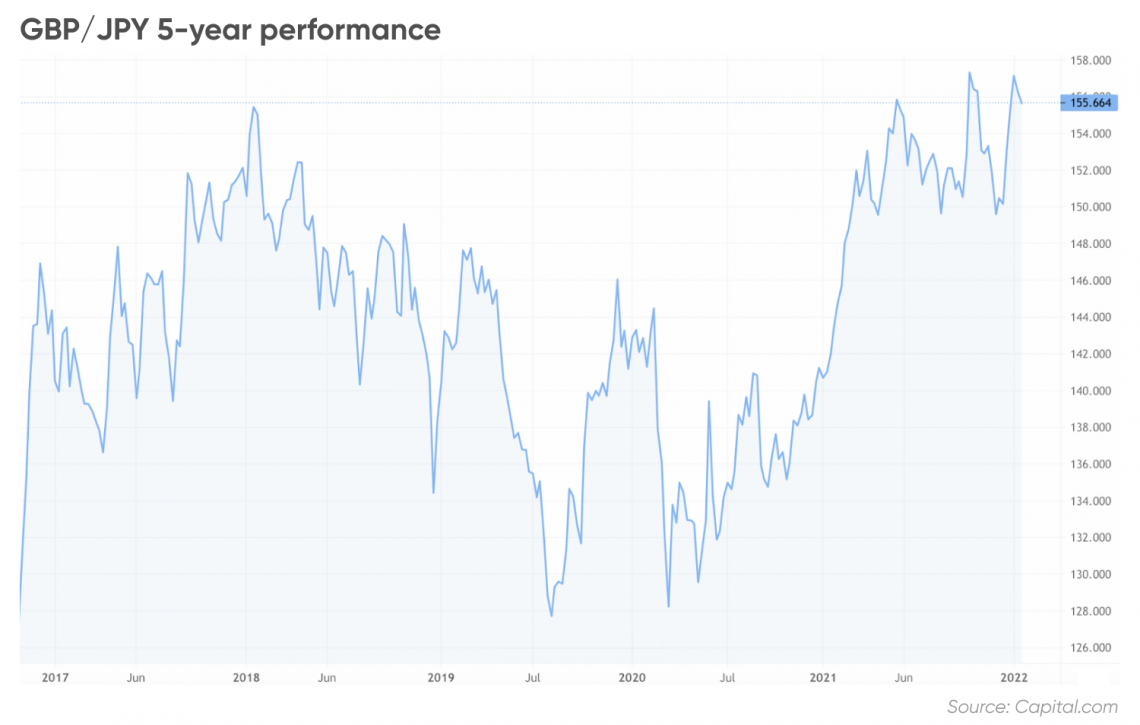 GBP/JPY outlook: Where is the pair now?

Over the past year, the GBP/JPY news has been largely similar to how the global risk appetite has moved.

From a low of 141 in January 2021, the exchange rate hit a high of 158 in late October as economic recovery in the United Kingdom and the western world was much sharper than in Japan. However, the yen clawed back after the emergence of the Omicron variant of Covid-19 posed fresh threats.

Riding on the global risk-off mood, the GBP/JPY slipped to 149 by early December, before monetary policy tightening took centre stage. With the Bank of Japan far behind the Bank of England when it comes to raising interest rates and the latter’s surprise rate hike in mid-December, the GBP/JPY started rising again, nearly touching 52-week highs in the week of 10 January.

While the Bank of England remains ahead of the Bank of Japan in monetary policy tightening, the US Federal Reserve’s aggressive calls for tightening have once again sparked a risk-off mood in global markets. The GBP/JPY exchange rate has felt the same and slipped down to 155.81 on 18 January. 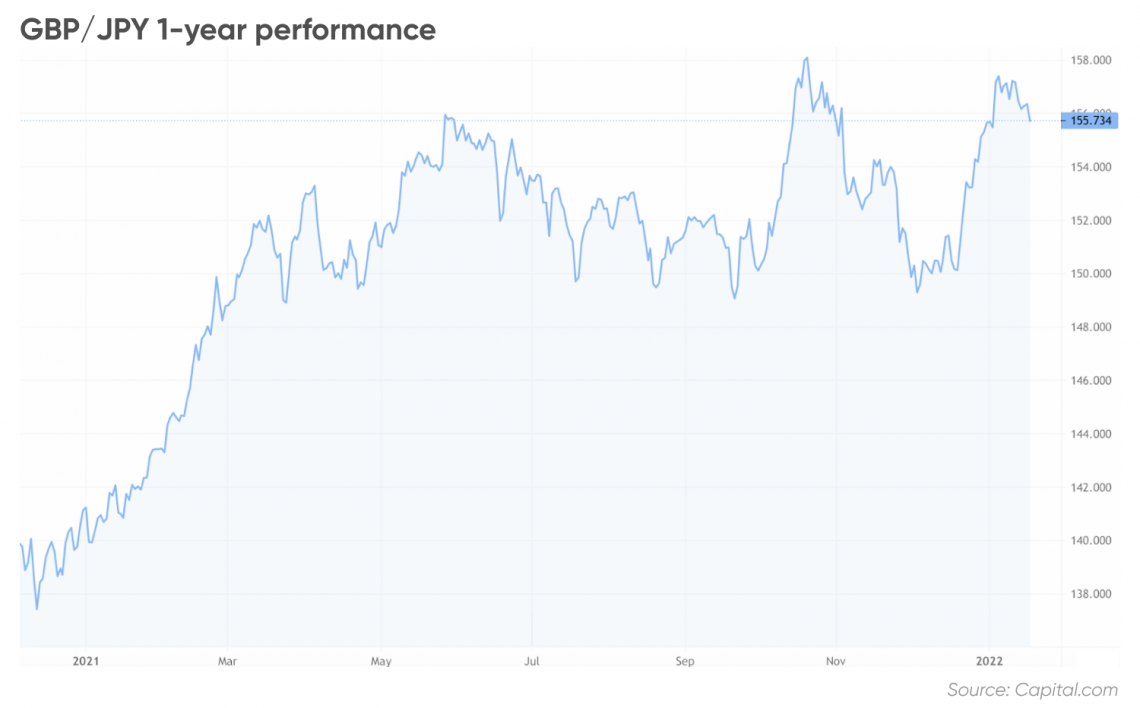 The current market sentiment for the GBP/JPY pair reflects the increasing risk-off sentiment in the global markets. The Japanese yen is considered a safe haven currency and tends to perform better when investors are not too keen on taking risks.

At time of writing, on 18 January, data from Capital.com showed trader sentiment at 34% bullish and 66% bearish. However, that sentiment data was calculated automatically, based on open positions for GBP/JPY on the platform, and should not be considered as an incentive to trade the asset.

Sterling is one of the world’s strongest currencies. It is the former global reserve currency with a role in a major financial trading centre. The value of GBP has been predominantly driven of late by the status of the Brexit process that began when the UK voted to leave the European Union in a 2016 referendum.

Over the course of 2021, the GBP’s fate was largely determined by its economic recovery from the Covid-19 pandemic. With a strong vaccination drive, the economy recovered quickly as the United Kingdom eased restrictions, and by mid-December the Bank of England was confident enough to start tightening monetary policy with its first rate hike.

Given that the Bank of Japan (BoJ) maintains an accommodative policy and has been doing so for most of the last 25 years, the currency often forms part of a carry trade. In other words, investors borrow the yen to purchase other currencies with higher interest rates.

In 2021, its stuttering economy and political changes affected its safe haven currency status and it struggled against major currencies, even when risk-off sentiment was strong in the global markets.

GBP/JPY prediction: What are analysts saying?

Very few analysts cover the GBP/JPY pair, be it in UK-based banks or Japan-based banks. Therefore, a long-term pound sterling to yen exchange rate forecast is not available.

However, some reputed analysts have shared their views on the individual currencies. For GBP, the forecast is positive.

“As for the GBP, further falls in the numbers of Covid-19 infections, hospitalisations and even the beginning of a drop in mortality rates could provide the GBP with some additional support, albeit that the markets have a lot already priced in,” Neil Parker, FX markets strategist at Natwest Bank, said in a note.

Similarly, according to Francesco Pesole, FX strategist at ING, the strong economic data from the United Kingdom bodes well for the GBP.

“UK GDP figures released on Friday beat expectations and suggested the Omicron impact on growth may ultimately prove modest. Ultimately, this should keep the quite aggressive hawkish expectations on BoE tightening alive.
“We think next week’s data releases will keep offering support to the pound. Jobs numbers should be strong, wage growth should stabilise around pre-pandemic levels and inflation should continue to edge higher. All this should offset some weaker retail sales on Friday. We expect GBP strength to emerge mostly against the EUR next week, and we still expect EUR/GBP to move below 0.83 in the near term,” he said in a note.

“A testament of the pound’s good momentum in the new year has indeed been the non-reactiveness of the currency to the political events in the UK…We think that a resignation by Boris may have a quite limited negative impact on GBP, as there would be no immediate implications for the UK growth outlook.

“Most focus should be on the Brexit stance: Truss’ first meeting with EU officials seemed to indicate a less confrontational approach, although the discussions over the Northern Ireland protocol are still set to prove challenging,” he added.

However, according to Philip Wee, senior FX strategist at Singapore-based DBS Bank, the upside to the GBP is limited.

“Although the market discounted a back-to-back rate hike at the Bank of England meeting on 3 February, it is also wary of a repeat of last November’s disappointment…As per CFTC data, GBP’s rise over the previous four weeks stemmed more from speculators trimming their short GBP positions than accumulating the currency. Expectations for a firmer December CPI reading will be diluted by increased pressure on Prime Minister Boris Johnson to resign over the “partygate” scandal. For now, GBP’s upside is capped,” he wrote in a note.

Meanwhile, regarding the JPY, ING Bank’s Pesole says the currency is finding good support because of how oversold it was last year and lingering risk-off sentiments in the markets.

“The performance of risk assets is set to remain key for the yen in the week ahead…Domestically, all eyes will be on the Bank of Japan policy meeting. Like in recent instances, we expect the meeting to be a non-event for JPY: the BoJ should unsurprisingly revise its growth forecasts lower, and its inflation forecasts higher, while signalling no changes in the policy mix,” he said in the note cited earlier.

At DBS, Wee also sees little downside for the JPY.

“Our economist expects the BoJ to lift the FY2022 inflation forecast slightly above 1%, up from 0.9% currently, but maintain the projection for inflation to stay below the 2% target till FY2023. Policy will stay ultra-accommodative with no urgency to join its peers in tightening to curb inflation, more so if the BoJ decides to conduct a thorough analysis on inflation,” he wrote in the note cited above.

When looking for GBP/JPY forecasts, it’s important to bear in mind that analysts’ predictions can be wrong. Their projections are based on making a fundamental and technical study of the currency pair’s performance. However, past performance is not a guarantee of future results.

Do your own research and always remember your decision to trade depends on your attitude to risk, your expertise in this market, the spread of your investment portfolio and how comfortable you feel about losing money. Never invest more than you can afford to lose.

The British pound sterling (GBP) to Japanese yen (JPY) exchange rate shows how many JPY are needed to buy one GBP.

The GBP is the official currency of the United Kingdom, the world’s fifth largest economy, and the fourth most-traded currency in the world, accounting for 12.7% of all global forex transactions in the world.

The Japanese yen is the official currency of the world’s third largest economy, Japan. It is also the third most-traded currency, accounting for 16.8% of all forex transactions, after the US dollar (USD) and euro (EUR).

The GBP/JPY has been falling in recent weeks as markets have already priced in the Bank of England’s hawkishness while the US Federal Reserve’s aggressive hawkishness is increasing the risk-off sentiment in global equity markets.

The same risk-off sentiment is helping boost demand for the safe haven currency JPY. As a result, the GBP/JPY has slipped in the last couple of weeks.

While it is possible to trade GBP/JPY around the clock, the best hours to trade the currency pair are when it’s experiencing higher trading volumes – typically around major market announcements.