Pound to dollar (GBP/USD) outlook: Is the worst already priced in?

The world's leading central bankers - Christine Lagarde of the ECB, Jerome Powell of the Fed, and Andrew Bailey of the Bank of England - acknowledged at a forum hosted by the European Central Bank in Sintra, Portugal, that the old regime of low inflation and record-low interest rates is now a distant memory.

The Covid-19 outbreak, the global supply chain issue, and the current conflict in Ukraine have all led to unprecedented geopolitical shocks, resulting in a spike in inflation that necessitates an urgent increase in the cost of money to avert dramatic effects.

What is thus the potential trajectory for the US dollar (DXY), the euro (EUR/USD), and the British pound (GBP/USD) in the upcoming months?

At the Sintra forum, Fed Chair Jerome Powell conceded that central banks' approach during the COVID-19 outbreak was incorrect, claiming "we now better understand how little we understand about inflation”. He went on to say that the US is "well-positioned to endure tighter monetary policy," confirming his commitment to reducing inflation while warning that the process would be "painful."

In terms of the dollar's implications, while rising interest rates in the US will continue at an aggressive pace, which is favourable for the greenback, there will be inevitable slowdowns in the growth rate of the economy, with the potential of entering a recession, which could weighs on the currency in a second phase.

The 14% rally in the dollar over the last year has been mainly driven by rising market expectations for future US interest rates. However, over the past few weeks, the market has been moving further ahead, starting to price in a slowdown in the pace of the rate hikes, due to rising recessionary risks for the US economy.

Fed futures point to rates at 3.3% by the end of the year, down from 3.5% earlier this month. This means that the market is pricing in 150 basis points of additional hikes until December 2022.

However, if the market kept thinking that signs of a recession meant that the Fed might lower rates in the future, this would likely hurt the dollar index (DXY) in the second half of the year.

ECB President Lagarde also cautioned during the Sintra conference that the low inflation period is unlikely to return. She further stated that before determining the magnitude of rate increases at the July meeting, the central bank must wait until Friday's eurozone CPI data. The market did not fully price in a half-percentage-point increase in July; therefore, an unexpected spike in inflation in the eurozone in June might boost this probability, which would be positively welcomed by the euro.

On the other hand, if euro zone inflation rises less than projected this week, it might cement a hike of 25 basis points in July, giving EUR/USD bears a rationale to target the parity level. 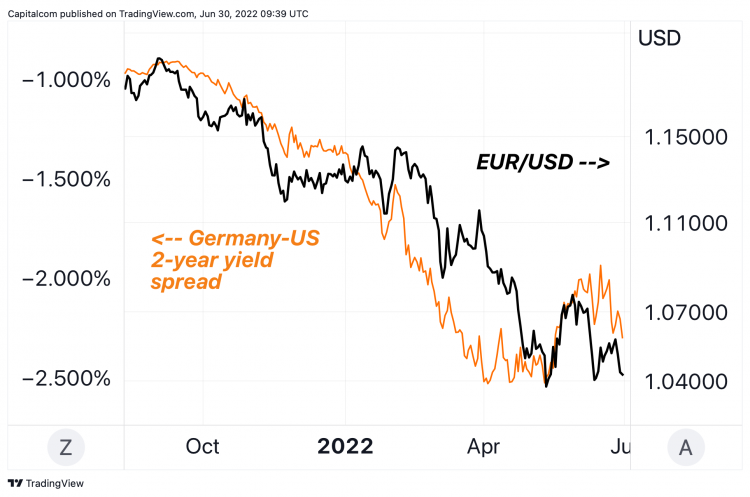 The EUR/USD pair has so far ignored the increases in expectations about the ECB's rate hikes, as those of the Federal Reserve have moved faster at the same time.

Looking at the short-term (2-year) rate differential between Germany and the United States, it is evident that for the EUR/USD to appreciate, the yield spread must begin to rise. This is only possible if the ECB begins to undertake a more aggressive monetary policy.

Pound to dollar (GBP/USD) outlook: Is the worst already priced in?

President of the Bank of England Andrew Bailey said that prolonged inflation necessitates more aggressive action through interest rate rises, even "if it is evident that the economy is slowing." He also said that UK inflation will rise higher, resulting in a significant real income shock.
Regarding the pound, he stressed that the (BoE) does not set an exchange rate target. The initial market responses were unfavourable, as the cable (GBP/USD) fell to 1.21 before recovering at 1.214, as of this writing. 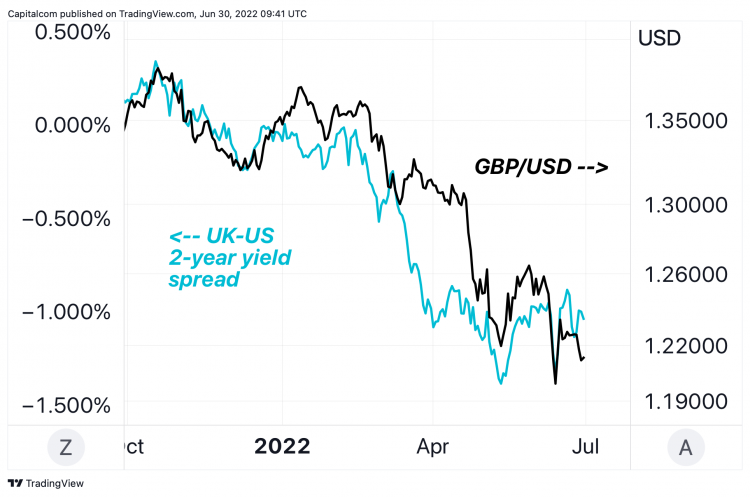 However, the pound has already priced in a significant amount of negative news, and the market is not especially optimistic on BoE rate rise prospects, pricing in cumulative raises of 1.7% over the next five meetings. If the BoE surprises the market with stronger hikes than expected, the pound might benefit.

Ultimately, for a sustained recovery in the GBP/USD exchange rate, the BoE must act far more aggressively than the Fed. In fact, the cable has had a strong correlation with the 2-year yield differential between gilts and Treasuries, which is a proxy for the divergences in monetary policy between the BoE and the Fed. 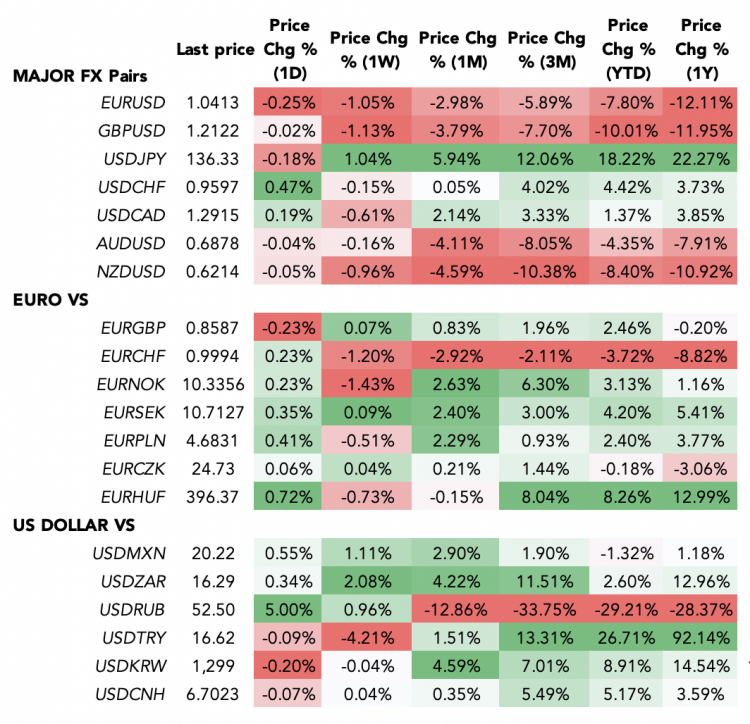 Forex news: euro falls below parity with the franc; hawks circle in Sintra

Capital.com Forex outlook: farewell, low-inflation era; will the USD be at risk?