The US dollar (DXY) bull trend was briefly halted in early August 2022 as the US annual inflation rate in July fell more than anticipated (8.5% versus 8.7%), prompting market speculation that the Federal Reserve may slow the pace of rate hikes in the coming months.

The July FOMC meeting's minutes showed, however, that there is still a long way to go before the war on inflation can be deemed won, suggesting that the Fed's tightening cycle is far from complete. This gave fresh support to the US dollar, causing the EUR/USD pair to approach the parity region.

The US economy appears to be better prepared to withstand an impending global economic downturn, as Europe is undergoing an energy crisis, which is exacerbating inflationary pressures and weighing on economic growth.

Therefore, widening growth disparities between the US and the rest of the world, as well as rising geopolitical risks in Ukraine or Taiwan, could still be supportive factors for the US dollar against its major peers such as the euro, the British pound (GBP) and the Japanese yen (JPY)

Let's take a look at what's going on the forex market by analysing charts to identify the most recent trends and trading signals in the five most important currency pairs.

Euro vs US dollar (EUR/USD) chart analysis: Euro is headed below parity 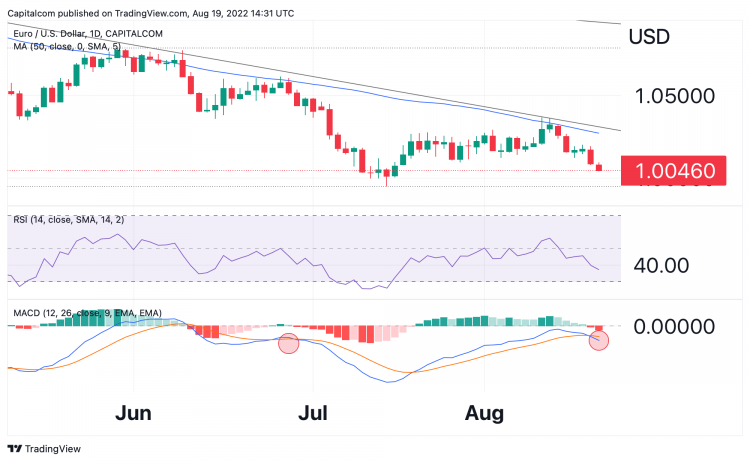 The euro (EUR/USD) is still stuck in a major downtrend against the dollar, which began in May 2021.

After reaching the parity level (1.00) in mid-July 2022, the single currency hinted at a rebound toward the dynamic resistance of the 50-day moving average, where it encountered a fierce selling pressure. Since the end of February 2022, the 50-dma has been a strong technical resistance to overcome for the EUR/USD pair.

The euro pair was unable to make a decisive break through the $1.03-1.035 range on August 11, giving bears renewed energy to target parity levels.

The yield differential between the German 2-year government bond and the US Treasury of the same maturity remains largely negative, indicating that monetary policy divergences between the Fed and the ECB still persist. The market believes that the ECB cannot go too far beyond the Fed in raising interest rates, amid fears of an impending recession in Europe due to the energy crisis and soaring inflation.

Looking at momentum indicators, the daily RSI fell below 50 and is now heading southward. MACD exhibited a bearish crossover below the zero line, which had previously triggered additional downside pressure on the pair. 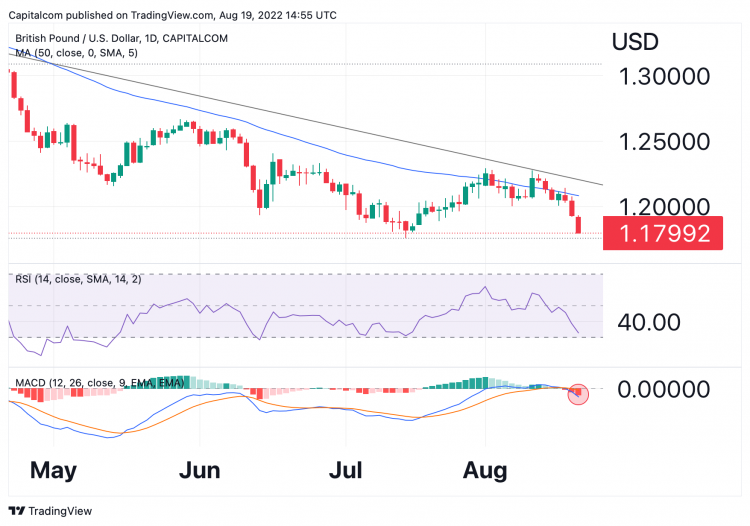 Since June 2021, the pound (GBP/USD) has been in a bearish trend against the dollar, with declines intensifying in 2022.

GBP/USD hit a low of 1.175 in mid-July, the lowest value since March 2020, before attempting a recovery to 1.2285, where it collided with the descending channel's trendline.

The cable's brief recovery in the second half of July was due primarily to a broader weakening of the dollar rather than a strengthening of the pound.

The Bank of England (BoE) raised the Bank rate by half a percentage point to 1.75% at its August meeting, the highest rate hike in the UK in 27 years, in response to elevated inflationary pressures caused by Europe's recent gas crisis. The BoE, however, forecasted inflation to peak at 13% in October this year and warned that the UK could enter a prolonged recession in the fourth quarter.

The gloomy economic picture for the United Kingdom effectively acted as a brake on the British pound's appreciation against the dollar.

The GBP/USD pair broke through two key support levels in the week ending August 19: the psychological 1.20 mark and then 1.1891 (July 22 lows). Daily RSI is nearing oversold levels, while MACD triggered a bearish crossover.

US dollar vs Japanese yen (USD/JPY) chart analysis: Temporary relief, but not a game changer 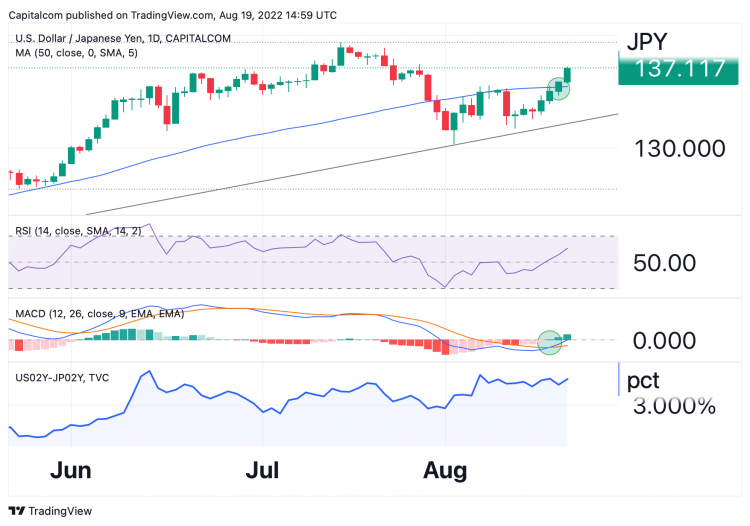 The dollar-yen (USD/JPY) pair has piqued the interest of traders in 2022, owing to the yen's heavy depreciation, which lost 17% against the dollar in the first half of the year.

The remarkable USD/JPY rally reached a high of 139.4 in mid-July, the highest value since 1998, before losing a bit of steam. Fears of a global recession and the possibility that US inflation had reached its peak fueled the yen's brief respite.

However, as long as the monetary policy gap between the Federal Reserve and the Bank of Japan persists, this cannot be considered a trend reversal in USD/JPY.  The Fed has yet to signal a slowing in the pace of interest rate hikes, despite markets betting on this possibility, while the BoJ continues to maintain an ultra-accommodative monetary policy by keeping interest rates at zero.

The yield spread between the 2-year Treasury and Japan's 2-year government bond remains wide and close to the June highs (3.5%), indicating that the market believes US interest rates will remain significantly higher than Japanese rates for the foreseeable future.

Technically, after finding dip buyers at 130.4 and 131.8, USD/JPY managed to rise above the 50-day moving average once more, updating August's highs. The daily RSI rose sharply above 50, and the MACD signalled a bullish crossover.

Therefore, USD/JPY continues to hold on an upward trend unless we observe significant catalysts, such as a Fed dovish turn or a BoJ hawkish shift. However, rising global growth fears or geopolitical risks, along with declining inflation fears, could reignite investor demand for the Japanese yen. 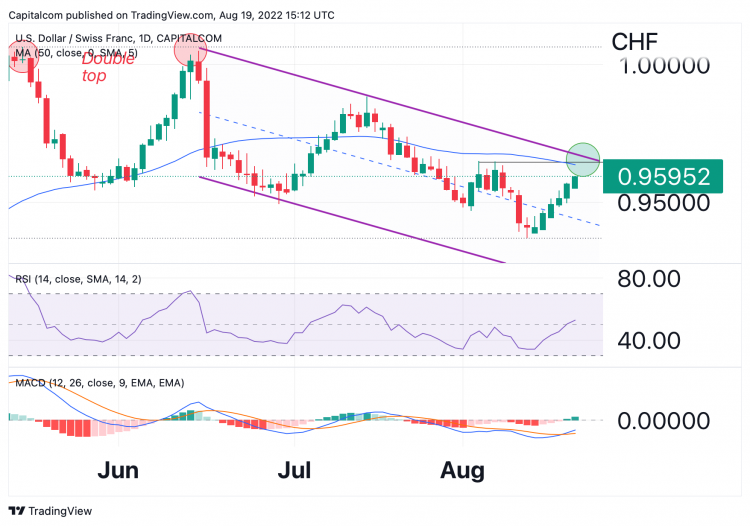 The last few months of the dollar-Swiss franc exchange rate (USD/CHF) have been a roller coaster ride, with pullback and extension phases alternating one after the other.

The annual rate of inflation in Switzerland was 3.4% in July 2022, the same as in June, remaining at the highest level since October 1993 and well above the 2% target. At the same time, the unemployment rate is still at a record-low 2.2%, allowing for a sustained pace of interest rate increases. The Swiss National Bank (SNB) unexpectedly raised interest rates by 50 basis points at its July meeting and is expected to do so again in September, bringing the policy rate into positive territory for the first time since July 2011.

The most prominent chart pattern on the USD/CHF daily timeframe was the double-top bearish reversal pattern, which formed in mid-June after the pair hit its second high at 1.006. Subsenquently, USD/CHF began its descent towards the neckline support zone at 0.95-0.955, which saw some buy-on-dip behavior emerging.

In the first half of July, there was a temporary recovery that struck with the resistance provided by the 23.6% Fibonacci retracement of 2022 highs to lows.

Since mid-July, however, USD/CHF has attempted a trend reversal. First, it broke through the 50-day moving average, and then it briefly crossed below the 200-day moving average's defence, which had been a very strong dynamic support over the year.

The dollar has rebounded nicely in recent sessions and is now heading towards a multi-resistance zone defined by the descending channel trendline, 50-day moving average, and August 3's high.

Sellers might be interested to step in in the 0.965 region; however, if the pair manages to break decisively through these resistances, this would put the short-term bearish trend to an end.

Australian dollar vs US dollar (AUD/USD) chart analysis: Not yet out of the woods 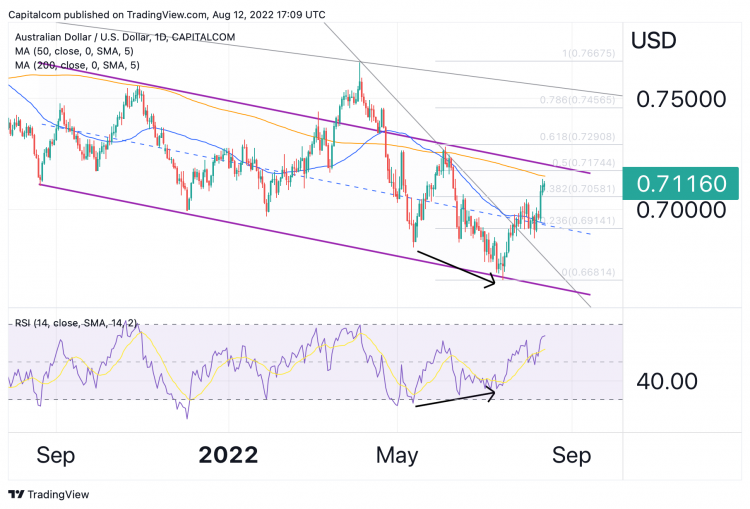 The Australian dollar-US dollar (AUD/USD) exchange rate travels within a bearish channel that has been in place since September 2021, despite the overshoot that occurred between March and April of 2022 that brought the pair to 0.765.

From then on, the Australian dollar plunged 13% against the greenback, reaching its year-to-date lows at 0.668 in mid-July. There, the RSI bullish divergence triggered the reversal of the short-term bearish trend, as AUD/USD reached fresh lows while the indicator rose.

Recently, AUD/USD has been able to overcome the 50-day moving average, albeit with some uncertainty, and project itself to the 200-day test, which represented a fierce resistance back in early June.

The Reserve Bank of Australia (RBA) backed the Aussie by raising the cash rate by 50 basis points for the second time in a row to 1.85% during its August 2022 meeting. The RBA has committed to further tightening, but not on a pre-set path, forecasting inflation to be slightly higher than 7% in 2022 and 4% in 2023.

The gloomier global growth outlook as a result of the war in Ukraine and the escalating geopolitical tensions between China and the United States over Taiwan are near-term negative catalysts for the Australian dollar. But the possibility of stronger commodity prices, due to supply chain disruptions, and the Fed slowing down the pace of hikes may benefit the Aussie.

AUD/USD has experienced a significant pullback over the past week before reaching the 200-day moving average and the 50% Fibonacci retracement level (April high/July low), which keeps the long-term bearish channel well in place.

The pair is now testing support from July 21's lows. A break below this level can cause further downward pressure to July 19's low of 0.68.