What is flux coin?

Binance listed flux coin for trading on 10 December, signalling the market’s acknowledgment of the token’s credential.

Binance also announced that it would list FLUX crypto on its platform and open trading for FLUX/USDT, FLUX/BTC, and FLUX/BUSD. For deposits and withdrawals, Binance exchange will only accept ERC-20 and FLUX BEP-20 tokens.

Following the announcement, the flux coin price surged to an intra-day high at $3.96 on 10 December, more than triple the price of $1.22 on 9 December. Prices have since fallen to $1.38 at the time of writing on 14 December, but the flux coin value is still 70 times higher than the price at the beginning of the year.

Flux coin prices have been rising since early this year, breaking above 10 cents from mid-March. The up-trend continued and the coin rose above $0.50 in the third quarter. 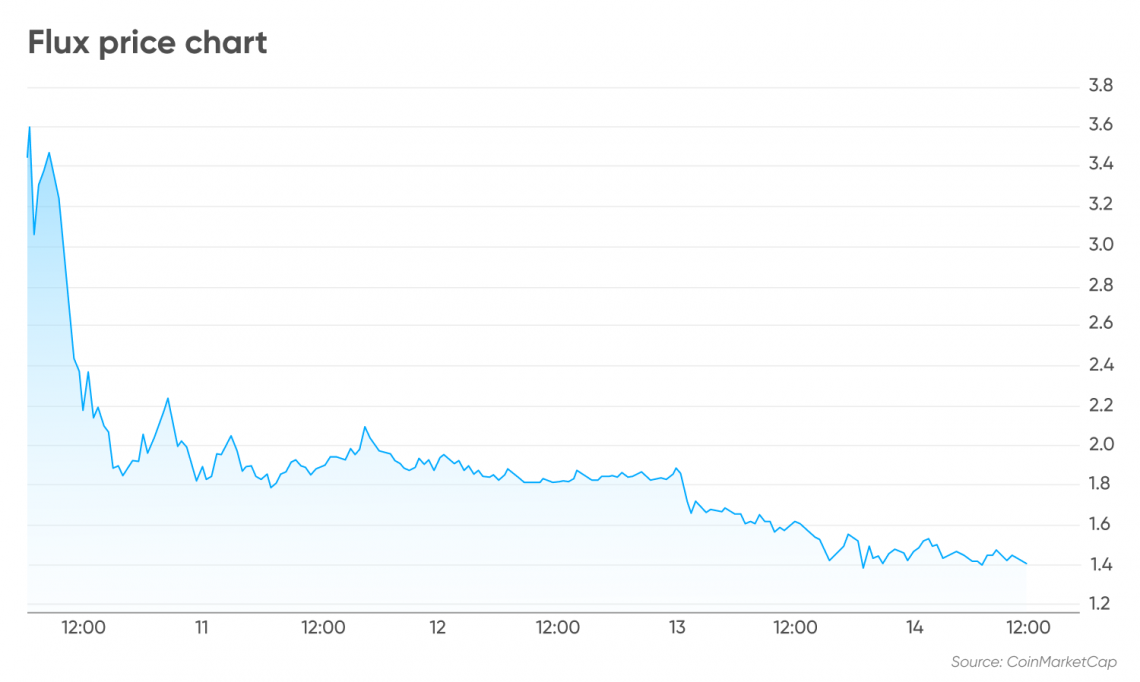 What is flux coin?

Formerly known as Zelcash, the cryptocurrency was rebranded as Flux on 27 March 2021.

According to cryptoasset price-tracking website CoinMarketCap, flux has a supply cap of 440 million coins and circulating supply of 221.55 million coins. The flux market cap is $306.5m.

The lux cryptocurrency is a native utility coin to facilitate the operation of the Flux ecosystem – a suite of decentralised computing services and blockchain-as-a-service solutions for cloud infrastructures.

“The asset also acts as the main incentivisation for operating a FluxNode: enterprise-grade server hardware powering the ecosystem.”

Flux mining uses a proof-of-work (PoW) protocol, where computational power from a graphic processing unit (GPU) is used to solve the consensus algorithm in Blockchain technology. In addition to attaining the token on exchanges through trading, flux is also given to users “as rewards for operating nodes” on the network and for mining. The native utility token can also be used to pay network fees.

“As the project and network grow, the value of flux will more than likely increase as its utility is leveraged by projects with new use cases,” said the operator.

Although other major fiat and cryptocurrencies are accepted for transactions on the Flux platform, its native utility coin will be “highly encouraged” as the currency for commerce on the network, and “customers using flux to purchase distributed computing power will receive substantial discounts,” added the Flux white paper.

The Flux platform was launched as a decentralised alternative to cloud infrastructure providers such as Amazon Web Services (AWS) and Google Cloud.

The platform is powered by FluxNode infrastructure, which are run by individual flux holders. Nodes are decentralised digital ledgers that record and verify all cryptocurrency transactions. In contrast to other projects, FluxNodes are available to be operated by anyone with the required utility token and hardware. As a result, the geographical locations of the nodes are distributed globally. According to the platform, there are 2,319 nodes in operation at the time of writing on 13 December.

Flux claimed the characteristics of FluxNode will provide additional security and privacy for its users.

Following the outage on AWS on 7 December, investors are increasingly looking at alternative providers who could reduce the world’s dependence on the dominant tech companies.

InvestorPlace listed the three Web 3.0 cryptos that support the development of the new decentralised internet:

InvestorPlace said the tools and products on Flux network made the platform “a force to be reckoned with among cloud computing plays like AWS or Alphabet’s Google Cloud”.

“Investors are taking note, too. In the first week of October, trading volume averaged about $1m worth of FLUX per day across exchanges.”

With the increased attention on Flux, several analysts are expecting prices to continue to rise, though the forecast range varied widely among the analysts we looked at, Tech News Leader, Digital Coin Price, Wallet Investor and Gov.Capital.

Tech News Leader has the most bullish projection among the four analysts (see table below).

According to Tech News Leader, “There is a chance that the average price of flux will rise to about $1.94 by 2021 if more investors are attracted to the idea. For 2021, the year can end with a maximum price of $2.00 with a minimum price level of $1.78.” DigitalCoin held a less bullish forecast.

According to the flux coin price forecast from technical analysis provider Walletinvestor.com, the price is expected to rise to $3.77 in one year and continue to climb to $12.33 in five years’ time.

Algorithm-based price forecaster Gov.Capital’s  Flux price prediction is the least bullish of all the websites. It expects the average Flux coin price to be $1.29 in a year’s time.

“Our data indicates that the asset price has been in an uptrend for the past year (or since its inception)….Flux has been showing a rising tendency so we believe that similar market segments were very popular in the given time frame,” wrote Gov.Capital.

Note that Flux predictions can be wrong. Forecasts shouldn’t be used as a substitute for your own research. Always conduct your own due diligence before investing. And never invest or trade money that you can’t afford to lose.