Recession and knock-on effects on the dollar

Dollar: down but not out

Financial crash – yes or no?

Peter Schiff: Why a financial crash is imminent

EXCLUSIVE: Peter Schiff, CEO and chief global strategist of brokerage firm Euro Pacific Capital, tells Capital.com that he believes a financial crash — even worse than that of 2008 — is imminent.

The financial heavyweight made these comments in a head-to-head Capital.com debate with Steve Keen, the award-winning economist and author of 'Can we Avoid Another Crisis?'

Schiff believes the potential crash could be far-reaching as the monetary policy actions that saved us from the worst economic effects of the pandemic have seeded a future scenario of structurally higher inflation and a global economy ill-equipped to cope with the removal of these policies.

Concerns about a global, inflation-driven recession are growing as the war in Ukraine further boosts prices of commodities that were already at lofty valuations due to supply-chain bottlenecks caused by the Covid pandemic.

Fears that such a recession could prompt a financial crash have already dented market sentiment, with the S&P 500 Index in the US down 7% from its January record high and the Nasdaq Composite down some 13% from its November all-time peak.

The US dollar and gold have offered investors the traditional safe havens from the storm, but if a financial crash and recession is due, how safe is the US currency?

Recession and knock-on effects on the dollar

This built-up latent demand during a period of squeezed supply, says Schiff, has led to higher rates of inflation across the globe, thus laying the foundation for a potential crash.

“There is no more basis the Federal Reserve [the Fed] can hide behind to justify this monetary policy, so if they have to withdraw it, everything that was built on top of it will collapse,” he says.

Schiff adds: “Governments replaced lost wages, but they didn’t replace lost productivity. They can print all the money they want, but if people aren't working, the money they’re printing has no value and all that happens is [that] prices [will] go up… and we’re just at the tip of the iceberg.”

“They can print all the money they want, but if people aren’t working, the money they’re printing has no value and that happens is [that] prices [will] go up… and we’re just at the tip of the iceberg.”— Peter Schiff, CEO and chief global strategist at Euro Pacific Capital

The supply shock has been further aggravated by Moscow’s war with Ukraine as Western sanctions curb supplies of Russian energy, minerals and agricultural commodities, and also by continuing restrictions in China due to its zero-tolerance stance on the spread of Covid.

“While a recession has been a risk scenario, we worry that the odds are increasing, and it could become the base case,” says Marc Chandler, managing partner and chief market strategist at Bannockburn Global Forex.

But is a financial market crash an inevitable consequence of a recession? Schiff believes such a crash would be dollar-driven as inflation runs higher.

“I think the long-term implications are very negative for the dollar because I think we are putting in centre stage the vulnerabilities that other nations are exposed to by their reliance on the dollar,” Schiff says.

He goes on to explain how the US has “weaponised” the dollar against Russia by the sanctions it had imposed over its actions against Ukraine, and how China and other countries could be exposed and thereby precipitate a heavy sell-down of dollar reserves.

“China does not want that weapon used against it. China has got a lot more dollars than Russia. I think they want to divest themselves of dollars. I think Russia, China – maybe India and other countries – want to accelerate their plans to be less dependent on the dollar.”

So, when can investors expect to see a market crash – or at least a sharp correction, or even an extended bear market? And what signals should they be looking for to alert themselves to its arrival?

“A lot of the prerequisites are already there,” says Russ Mould, investment research director at AJ Bell.

Mould highlights what he sees as an over-leveraged financial system; a “frightening” buildup in the amounts of derivatives – $3.5trn stock and index-based options expired last Friday; frothy initial public offering (IPO) and mergers and acquisitions (M&A) markets; overconfidence in central bank backstops; and the long bull run leading to overvaluations.

Mould adds: “All of the petrol-soaked logs are in place, with the kindling stacked up around them – you’re just looking for the match. That said, you could have argued that at almost any stage in the last decade.

“Policy response has ridden to save the day, but as China is finding out now, that just exacerbates the underlying fragilities, and it gets harder and harder to manage.”

“Of the myriad problems the US and the world face now, an existential challenge to the dollar is not among them, as there is no alternative… to move out of the dollar and the US Treasury market is to give up yield, liquidity and security.”— Marc Chandler, managing partner and chief market strategist at Bannockburn Global Forex

While there’s certainly some froth in valuations in the stock markets, particularly in the US high-growth tech sectors, would even a major sell-off precipitate a crash that presents systemic risk to markets – including the downfall of the world's most powerful markets totem, the dollar?

Klisman Murati, founder and CEO at London research house Pareto Economics, draws the distinction between a market crash and a correction: “They’re being taken to mean the same thing, but have two different meanings. If you talk about a crash, it’s alarmist, it’s violent. Whereas correction is more sedate,” he says.

Experienced investors who can recognise the signs – such as those mentioned by Mould above – even welcome market corrections by taking profits on the assets in their portfolios they see as overvalued and buying back at a lower price once the selloff has calmed.

Coop says: “Equity markets usually have selloffs of more than 10% every 12–18 months – these are typically called ‘corrections’. Crashes are much larger and longer-lasting falls in price.”

Schiff describes a scenario in which the Fed will have to act aggressively to avoid a cascade effect that will continue to drive inflation higher.

He says: “The only way to stop this will be for the Fed to completely reverse its policy and allow interest rates to rise dramatically, shrink the money supply, and not care about the short-term consequences of defaulting companies and governments, bankruptcies, unemployment, failing banks and depositors losing money.”

But few other analysts see the same dramatic scenario playing out.

Alan Oster, chief economist at NAB Group, makes a contrast with the period of stagflation in the 1970s and 1980s that was caused by an oil-price shock: “Back in those days, you had growth that was dying and inflation at 12%. We are not talking about that anymore.”

He adds: “All central banks at this stage are aware that they don't want to do what they did in 1982. People say oil prices killed the economy in the 1970s and 1980s, but it was the central banks' reaction to the oil-price shock. Hopefully, we are not going to see that again.” 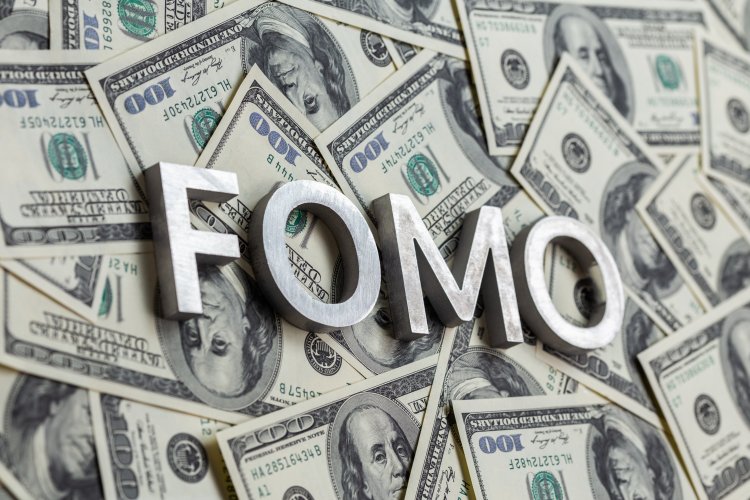 When FOMO (fear of missing out) met PONGO (the pain of not getting out): It may be hard to miss out on making money, but this could come with a cost – Photo: Shutterstock

In a research note, Goldman Sachs says the decline in the S&P 500 in recent weeks suggests about a 40% likelihood of US recession, which would lead to much lower valuations and earnings.

“Our economists estimate there’s a 20%–35% chance of a US downturn, which is roughly in line with models based on Treasury yields,” the note adds.

As Goldman Sachs’ note concludes: “The S&P 500 has dropped about 24% from peak to trough around past recessions (based on the median). But when the US economy avoids a sustained contraction after a 10% market correction, the index has returned 15% over the next 12 months.”

Dollar: down but not out

And what about the dollar? Is it also in danger of collapse and losing its reserve status after decades as the most revered currency?

“Counterintuitively, the dollar has fallen on average 4% during the past four tightening cycles, according to the BIS [Bank of International Settlements]. The greenback's rally may have some more gas in it, but we think a significant high is near and expect it to finish the year lower than where it is now,” says Chandler.

He concludes: “But, of the myriad of problems the US and the rest of the world face now, an existential challenge to the dollar is not among them, as there is no compelling alternative. The European bond market remains fragmented and yields are low. To move out of the dollar and the US Treasury market is to give up yield, liquidity and security.”

Neil Shearing at Capital Economics agrees. He admits that the global financial system may see some fragmentation as alternative trading blocs emerge, such as China and some of its Asian neighbours, who transact cross border deals in the yuan, but believes the dollar will continue to dominate.

“Claims that the war in Ukraine will prove to be a watershed moment that ends the dollar’s position at the heart of the global financial system are wide of the mark,” Shearing says.

“It could accelerate the development of smaller trading blocs that use alternative currencies, but these won’t rival the scale and reach of the dollar.”

Financial crash – yes or no?

Of course, the answer to this question would never be definitive, although most analysts doubt a crash is on the cards.

It is true that an equity market correction is underway, certainly on the US Nasdaq Composite. Indeed, at its lowest point this year, it was down by 21% from its most recent peak, and technically, a fall of more than 20% represents a bear market.

But market corrections should be expected after a lengthy bull run. Just as forest fires clear out dead and aging wood to make way for new growth, corrections draw asset prices back to levels where investment can begin in earnest again.

What has become clear from the responses above is that many of the world’s economies are experiencing a period of slowing growth and higher inflation, and central banks must tread carefully to deal with these risks.

While we can watch for the early signs of a market crash, there will always be cycles where economic activity slows for a period – that's the nature of boom and bust.

Mould offers investors the best advice, perhaps, which inevitably, comes with its own caveat: “All investors can do to protect themselves from such tail risks is to focus on valuation and ensure they pay prices that offer downside protection and upside potential.

“But rampant bull markets buoyed by cheap central bank liquidity aren’t generally conducive to encouraging such preparation, as making money looks too easy, and the fear of missing out (FOMO) becomes too great."

This is where FOMO meets PONGO – the pain of not getting out.

Some currencies are more at risk in Russia-Ukraine conflict

FOMC’s policy shifts for 2022: Next up for markets, investors

Capital.com Is a financial crash imminent? Analysts speak out