Ellipsis is a decentralised exchange (DEX) based on the Binance Smart Chain (BSC), but in terms of crypto what is Ellipsis (EPX)?

Let’s see what we can find out, and take a look at some Ellipsis price predictions, too.

If a cryptocurrency is to have any value at all, then it needs to be able to be bought, sold or traded. The most common place for this to happen is on a crypto exchange. There are ultimately two kinds of crypto exchange.

The most common is a centralised exchange (CEX). Centralised exchanges are established and run by de facto organisations. People are only able to operate with the currency pairs that the exchange lists. Furthermore, most of the time, people need to go through Know Your Customer checks before they can start operating.

One such decentralised exchange is Ellipsis. This project, which was launched in 2021 as a fork from the Curve Finance protocol, allows people to deposit tokens into liquidity pools in return for rewards.

Every blockchain-based network needs its own crypto, and Ellipsis has two, technically speaking. When the system first came out, its token was known as EPS but, in May this year, a migration took place to a new form of the token, called EPX, at an exchange rate of 88 EPX to one EPS.

While EPS is still available to be bought, sold, and traded, its former usage of being staked in the system is now the preserve of EPX, which is why we will talk about an EPX, rather than an EPS price prediction.

It is worth pointing out that there are no named founders of Ellipsis. While this is not uncommon in the world of DEXs, it might cause an investor who wants to be able to hold someone accountable to pause for thought.

It is also important to note that the DEX charges a fee every time someone swaps one cryptocurrency for another. These fees are split 50:50 between liquidity providers and EPX stakers.

Ellipsis and its tokens are based on the BSC blockchain, which means that, while you will hear references to things like the EPX coin or an Ellipsis coin price prediction, these are not, technically speaking, accurate, because EPX is a token, rather than a coin. 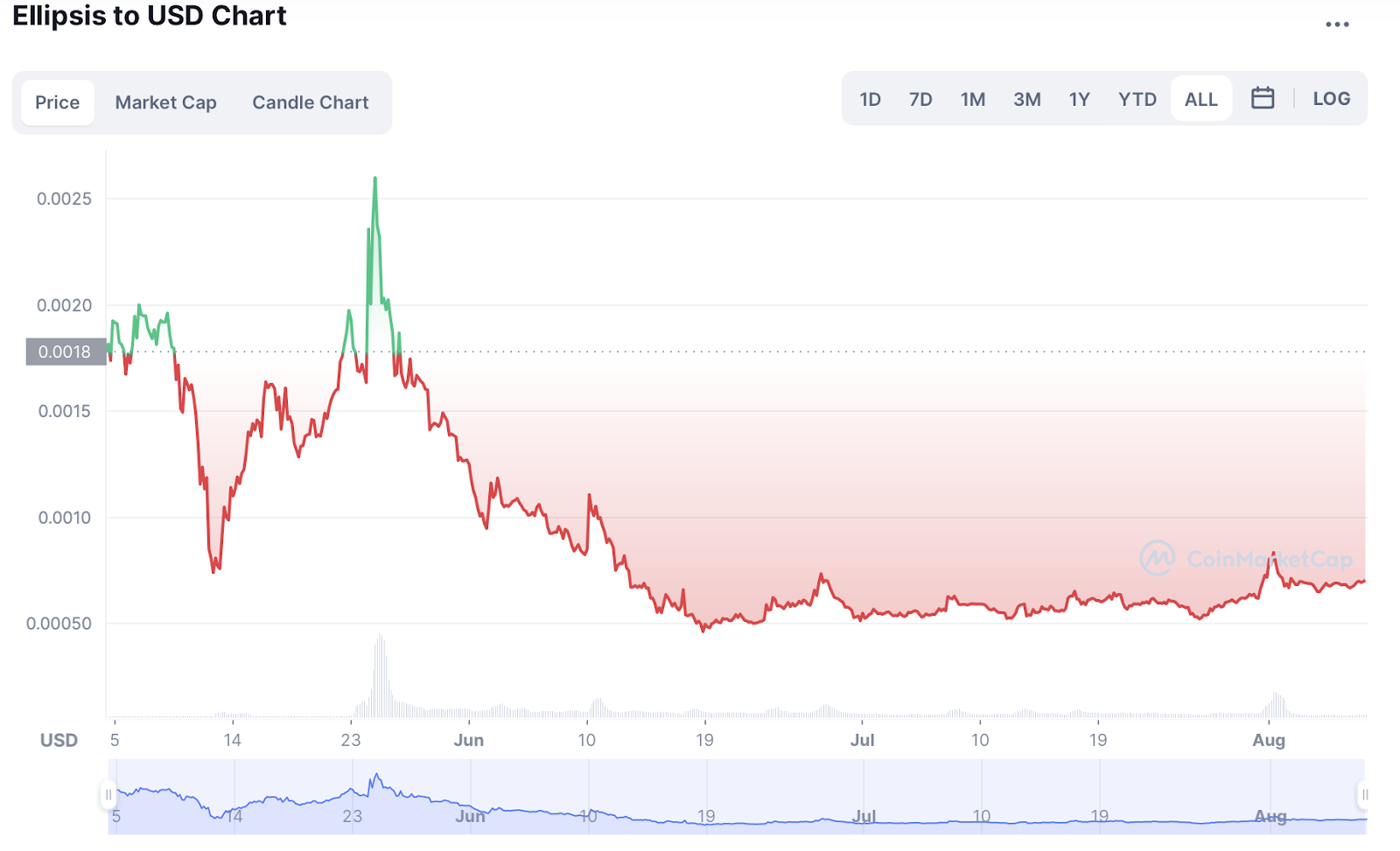 Now, let’s take a look at the Ellipsis price history. While past performance should never be taken as an indicator of future results, knowing what the token has done in the past can give us some much-needed context when it comes to either interpreting an Ellipsis price prediction or making one of our own.

Also, since EPX is the de facto successor token to EPS, it makes sense to take a look at what EPS did before EPX was launched, too.

EPS first came onto the open market in the spring of 2021. This was potentially a good time to launch a cryptocurrency, as the market was supremely buoyant in the wake of an upturn caused, at least in part, by United States’ Covid-19 stimulus cheques finding their way into the crypto sphere.

This buzz surrounding all things blockchain helped the newly-launched token and, on 24 March 2021, it stood at an all-time high of $21.29. There was some inevitable decline, as the market evidently considered it to be somewhat overvalued, but although the token dropped to around $2.50 the following day, there was some recovery in early April which saw EPS reach highs of more than $6.90.

Following that, though, there was a downturn and things got worse following the great crypto day crash of 19 May 2021. Both the token and the market spent the summer in the doldrums, with mid-July seeing a period under $0.40.

By August, things started to pick up, as a growing interest in non-fungible tokens (NFTs) helped the market recover somewhat, and the token even broke through $1 briefly towards the end of the month. Following that, though, it was all downhill, and not even early November’s news that Bitcoin (BTC) had reached new heights could stop the overall decline, with concerns over the Omicron variant of Covid-19 leading to EPS closing the year at $0.2616.

In the first few months of 2022, EPS pretty much followed the market in a series of downturns, with issues like Russia’s invasion of Ukraine on 24 February and China’s crypto ban in early April seeing it drop to $0.1551 at the close of 3 May 2022.

It was around this time that EPX started to trade on the open market. At the start of trading on 4 May 2022, the new version of the token was worth $0.00169, but then disaster struck. Shortly after EPX emerged, the UST stablecoin became depegged, which caused the collapse of the associated LUNA cryptocurrency.

The good news could not last and June saw more crypto crises, with the news that the Celsius crypto lending platform had cancelled withdrawals confirming that cryptocurrency was in a bear market.

While EPX had a maximum supply of 132 billion, neither CoinMarketCap nor CoinGecko – usually the two most reliable crypto data websites – had an active circulation figure for EPX.

With that all said and done, let’s take a look at some Ellipsis price predictions. It is important to note at this stage that price forecasts, especially when it comes to a commodity as potentially volatile as cryptocurrency, are often wrong. Furthermore, long-term crypto price predictions are often made using an algorithm, which means that they can change at a moment’s notice.

First, when it came to making an Ellipsis crypto price prediction, at the time of writing on 20 September 2022 CryptoPredictions.com said that EPX could close this year at around $0.00076. By September 2023, the site suggested that the token might be worth $0.00089, before potentially achieving just over $0.0013 in September 2024.

Meanwhile, DigitalCoinPrice made an EPX price prediction that saw the token at $0.000816 this year before experiencing some long-term price growth that would suggest it may reach $0.00253 in 2025. Following that, though, the site predicted a drop in the token’s price to $0.00220 in 2026, before a possible recovery to $0.00309 the following year.

Finally, Gov Capital was far more gloomy when it came to making an Ellipsis token price prediction. The site suggested that the token could drop to $0.000194 by 1 October, and continue on a downward trajectory to get to a price so low as to be virtually worthless by 23 October 2022. There would be little hope for a recovery in the longer-term, either, with the site’s Ellipsis price forecast for 20 September 2023 seeing it come in at $0, making EPX a de facto dead coin.

When considering an EPX token price prediction, it’s important to keep in mind that cryptocurrency markets remain extremely volatile, making it difficult to accurately predict what a coin or token’s price will be in a few hours, and even harder to give long-term estimates. As such, analysts and algorithm-based forecasters can and do get their predictions wrong.

Dogecoin price prediction: Is now the time to buy into the meme coin?

Steem price prediction: What is steem?