Dexcom stock split: Is the DXCM share price on verge of a post-split surge?

So, should investors expect the price to enjoy a post-split surge over the coming weeks, or are there other factors that need to be considered? In this Dexcom stock split analysis, we take a look at the company’s performance, examine recent results and see what analysts expect for the Dexcom stock price.

A stock split is when a company chooses to divide existing high-value shares into a larger number of lower-value new ones. The investor’s share of the overall company remains the same.

“Dividing the shares into smaller units can increase demand for them. This can make an individual share a little more affordable for individual investors,” said Susannah Streeter, senior investment and markets analyst at Hargreaves Lansdown.

Streeter also pointed out that a lower price can be useful when companies want to remunerate staff with share options, adding that “the overall value of shares won’t change after a stock split, apart from the usual market movements which can see share prices fall as well as rise.”

Dexcom designs and produces continuous glucose monitoring systems for diabetics. CGM systems serve as an alternative to the traditional blood glucose metre process. The company is evolving its CGM systems to include the disposable sensor and the durable receiver.

The company was founded in 1999, based on the research of Dr. Stuart J. Updike and George P. Hicks in 1967 into implantable, long-performing glucose sensors that the body would not reject.

In a recent investor presentation, the company emphasised that diabetes care remains a “largely unmet global need”, with its core US market having the potential for further growth. It also pointed out that international markets presented “major opportunities” for geographic expansion and broader access.

In February, it debuted its first-ever Super Bowl commercial, starring multi-platinum recording artist, actor and philanthropist Nick Jonas, who was diagnosed with Type 1 diabetes at the age of 13.

“It means so much to me to bring this message of awareness and the need for improved CGM access to as many people with diabetes as possible,” he said.

Dexcom announced in March that its Board of Directors had approved a four-for-one split of the company’s common stock. The Dexcom stock split increases the number of authorised shares of common stock from 200,000,000 to 800,000,000. At the time, the stock price was around $480 a share.

Stockholders approved the Dexcom stock split at their annual meeting last May, and trading started on a split-adjusted basis on 10 Jun. 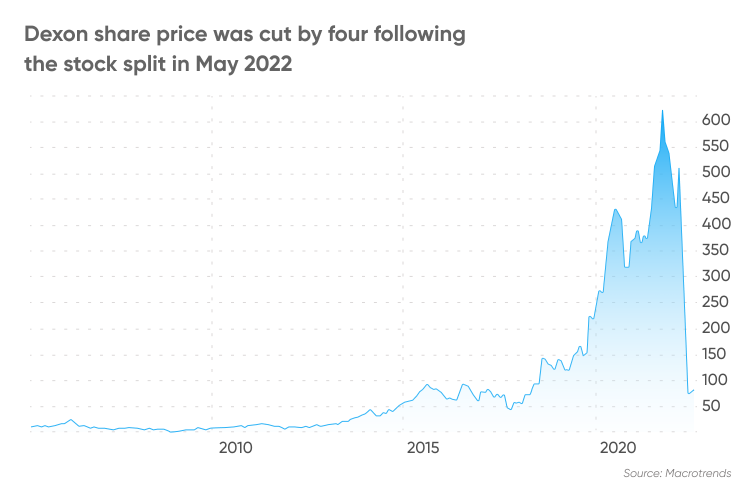 Debbie Wang, senior equity analyst at Morningstar, doesn’t see a great deal of significance in the Dexcom stock split. She currently (30 August) has a $81 fair value estimate on the stock.

“We’re mainly focused on our projections of cash flow that the underlying enterprise can generate – whether that’s split across 100 or 500 shares,” she told Capital.com.

However, she acknowledged the reasons why such a move can happen.

“Management sometimes likes to use the stock split to signal confidence in continued growth in share price. It’s not clear to us that there were any concerns about liquidity prior to the split,” she said.

Wang suggested the timing was unfortunate as the market pulled back across the board, particularly for “growth shares” that had enjoyed multiple expansion.

“As long as growth stocks are under pressure in this volatile market, we think it’s unlikely that another stock split is in the works,” she said.

As for DXCM’s prospects, Wang is watching to see how the G7 (monitoring system) performs in Europe, while awaiting approval in the US.

88.46 Price
-0.120% 1D Chg, %
Trade Now
Swap short:
Swap long:
Trade Now
“Now that integration with a range of pumps has become a more significant aspect of DXCM’s CGM technology, we wouldn’t be surprised if we see more delays crop up in the regulatory process, and in commercial adoption,” she added.

The company recently reported financial results for the second quarter ended 30 June 2022, in which it revealed that revenue was at $696.2m – a 17% increase on the corresponding period last year.

The company also advanced a number of initiatives, including the expansion of its CGM portfolio strategy in international markets, according to Kevin Sayer, Dexcom’s chairman, president and CEO.

“We are excited for the rest of this year, particularly as we implement a broader launch of G7 in the coming weeks,” he said.

Although the company recorded a decent set of results, the numbers were below what many analysts had expected.

In other news, Dexcom announced that its ONE real-time Continuous Glucose Monitoring system will be available on prescription in the UK for people with type 1 or type 2 diabetes using insulin.

In a statement, Karen Baxter, Dexcom Vice President, UK & Ireland, Benelux, France and Spain, said they were working on ensuring the diabetes community can benefit as quickly as possible.

“The addition of Dexcom ONE to the NHS England, Wales, Scotland and Northern Ireland drug tariff is enormous progress towards improving choice of diabetes tech, providing an alternative to burdensome finger pricks and scanning,” she said.

Dexcom stock split: Where next for the stock?

Dexcom stock was rated a “moderate buy”, according to the views of 14 analysts compiled by MarketBeat, as of 30 August.

According to the algorithmic forecasts of Wallet Investor, as of 30 August, Dexcom was “an awesome long-term investment”, with shares expected to almost double to $166.13 over the coming year.

Analysts’ price predictions can be wrong and shouldn’t be used as a substitute for your own research. Always conduct your own due diligence before trading, looking at the company’s fundamentals, technical analysis, latest news and commentary.

Whether to trade DXOM stock post-stock split should depend on your trading strategy, account size, risk tolerance and other factors related to your personal trading goals. Note that past performance does not guarantee future returns. And never trade money you cannot afford to lose.

Disney shareholders: Who owns the most DIS stock?

Manchester United shareholders: Who owns the most MANU stock?