A series of scandals

CS stock forecast: Looking ahead to 2030

The new year has so far seen Credit Suisse (CS) face a court case, litigation provisions, and the departure of its chair thanks to a ‘quarantine goof’. And it's only February.

Can the beleaguered Swiss bank bounce back? Read on for the latest Credit Suisse stock price forecast.

In 2017 Credit Suisse’s share price entered a bull run under the stewardship of CEO Tidjane Thiam. In November 2017 the bank announced strong growth and significant cost reductions, and the share price soared to a five-year high of $20 on 22 January 2018.

But growth soon petered out, and in 2018 CS stock plummeted as investors were disappointed by unambitious targets and low shareholder payouts. Over the course of the year the share price almost halved, reaching $10.40 on 24 December 2018.

The share price fluctuated in 2019 and regained some ground, reaching $13.70 on 18 February 2020. But then came a precipitous fall as the stock price tumbled to $7 just a month later – a decrease of almost 50%. 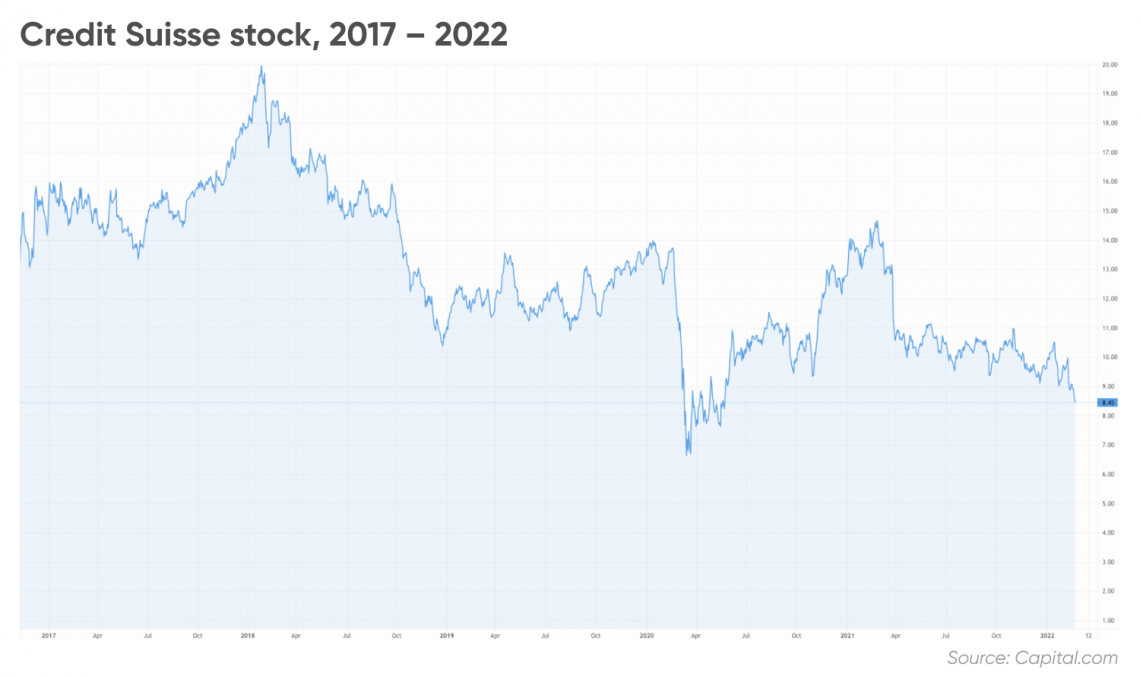 This drop was driven by a double blow, as the onset of the pandemic impacted investor confidence across the board, and Thiam unexpectedly stepped down as CEO in the wake of a widely reported ‘spying scandal’.

Yet in September 2020, the Swiss Financial Market Supervisory Authority (FINMA) announced that it would open enforcement proceedings against the bank in the context of what Credit Suisse euphemistically referred to as the “observation matter”.

A series of scandals

But 2021 saw the bank beset by another scandal, then another…and another.

In April 2021 Credit Suisse was subjected to a double FINMA investigation following the ‘Archegos’ and ‘Greensill’ cases.

July 2021 would see Credit Suisse publish a report of its external investigation into Archegos Capital Management, which found that while there was evidence of a failure to effectively manage risk, staff did not engage in fraudulent or illegal conduct.

“While the bank has already taken a series of decisive actions to strengthen the risk framework, we are determined to learn all the right lessons and further enhance our control functions to ensure that we emerge stronger,” said the then chair, António Horta-Osório, in a statement at the time.

The Credit Suisse board also commissioned an independent investigation into the Greensill case. However, in its 2021 fourth-quarter results, it announced that “in light of the ongoing recovery process and the legal complexities of the matter, there is no intention by the Board to publish the report”. 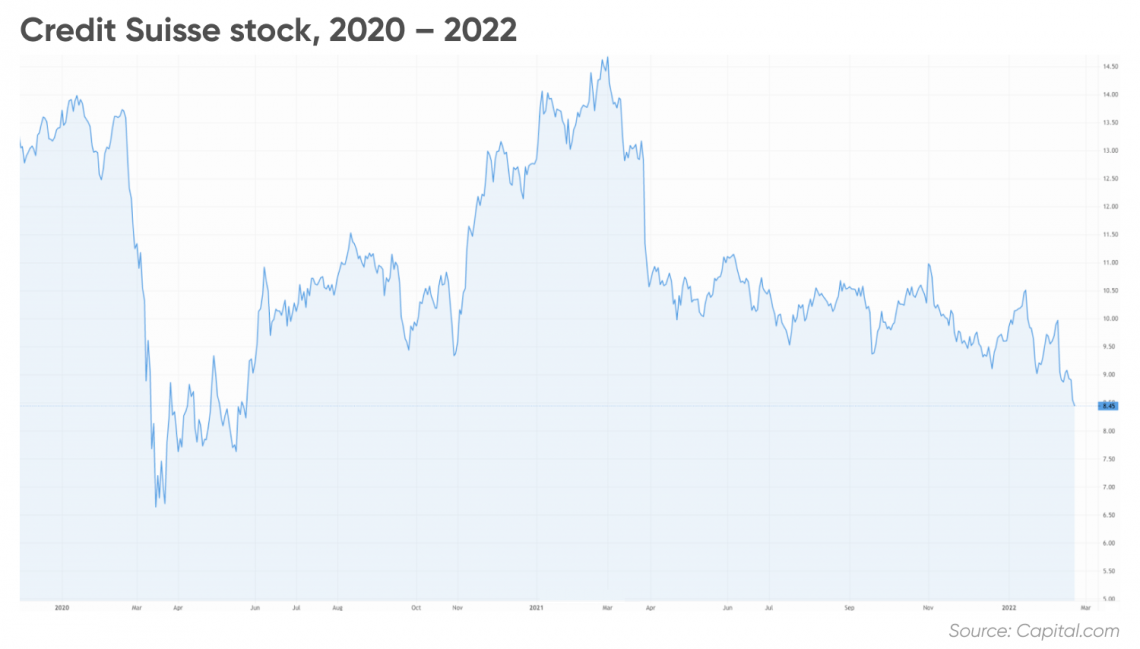 In October 2021 Credit Suisse announced settlements with US, UK and Swiss regulators to resolve investigations into loan financing in Mozambique between 2013 and 2016. The stock  price dipped around 2% in the days following the news.

More bad news was to come. On 17 January 2022, Horta-Osório was forced to resign after committing a Covid-19 ‘quarantine goof’. The share price dipped almost 5% by the following day, reflecting investors’ unease.

A trading announcement on 25 January then warned that profits for Q4 2021 would be negatively impacted by litigation provisions, and the share price fell to $9.24 by day’s end – a drop of 2%.

Credit Suisse found itself in a Swiss court on 7 February 2022, accused of allowing an alleged Bulgarian cocaine trafficking gang to launder millions of euros.

“Credit Suisse unreservedly rejects as meritless all allegations in this legacy matter raised against it and is convinced that its former employee is innocent,” the bank said in a statement to Reuters on 8 February. The case nonetheless represents the first criminal trial of a major bank.

More recently, the bank was forced to issue a statement after an alleged leak saw a flurry of negative media reports accusing the bank of harbouring the wealth of clients involved in serious crime.

Credit Suisse maintained that it “strongly rejects the allegations and insinuations about the bank’s purported business practices”. The share price dipped around 0.5% as the news broke, and stood at $8.93 at the time of writing.

Full-year results were announced on 10 February 2022. Credit Suisse reported a full-year pre-tax loss of CHF 522m ($567.61m), and attributed this to “the Archegos matter, goodwill impairment and litigation provisions”.

What is your sentiment on CS?

Give CS a try

In the bank’s earnings report, CEO Thomas Gottstein acknowledged that “2021 was a very challenging year for Credit Suisse”, and there is no doubt that its successive scandals are beginning to hit its bottom line.

Amid the series of scandals, there is a risk that investors will start to question whether Credit Suisse is a good investment. The departure of chair Horta-Osório came just three months after he announced a new group strategy, which aimed to “foster a culture that reinforces the importance of accountability and responsibility”, and the irony is not lost on investors.

“The cleaning-up of legacy burdens from investment banking is threatening to become a never-ending story,” analysts at Zürcher Kantonalbank said in a note following its 25 January trading update. They also said they saw no reason to invest in the bank’s shares.

Yet Credit Suisse maintains that its “franchise remains resilient”, and pledged change in its recent earnings report.

“It was paramount that we reviewed, reflected and comprehended the impact that both the Archegos and SCFF [supply chain finance funds] matters had on our bank, our culture, our strategy and the way we work,” said CEO Gottstein.

The bank announced a series of remedial actions, including constraining risk across all divisions, reducing Group variable compensation by 32%, and taking litigation provisions to address legacy issues.

The bank also strengthened its capital base over the course of the year and reported a CET1 ratio of 14.4% for 2021, up from 12.9% in 2020. CET1 capital is a component of tier 1 capital, which banks are required to maintain to absorb unexpected losses that arise during the course of operations.

According to data from MarketBeat, Credit Suisse stock was rated a consensus ‘hold’ at the time of writing. As of 23 February, CS stock had three ‘buy’ ratings, 10 ‘hold’ ratings, and four ‘sell’ ratings.

Credit Suisse announced Q3 results on 4 November 2021, triggering a burst of analyst activity. Analysts at Deutsche Bank downgraded the stock from a ‘buy’ to a ‘hold’ rating on 5 November.

On 6 December 2021, UBS downgraded the stock from ‘buy’ to ‘neutral’, and January 2022 also saw analysts at both Keefe, Bruyette & Woods and BNP Paribas downgrade their ratings to ‘underperform’ and ‘neutral’ respectively.

CS stock forecast: Looking ahead to 2030

WalletInvestor’s CS share price predictions use historical price movements to inform future projections. As of 23 February, it forecasted the stock price dipping to $7.70 by February 2023.

​​Nike (NKE) stock forecast: can it still just do it?