On Monday, October 3, silver rose 7.2% to $20.3 per troy ounce, marking its second-best session so far this year and boosted by a recently weakening US dollar (DXY).

It comes in the wake of recent data showing that manufacturing activity in the United States expanded at its slowest rate in more than two years, pointing to a slowdown in the largest economy in the world and, as a result, raising hopes for the current aggressive tightening of monetary policy to be curbed in the near future.

Silver has just crossed the critical $20 per troy ounce level

The US dollar (DXY) recently fell following pending US home sales dipping about 2% month-on-month in August, which marked a third consecutive monthly decline. While the dollar (DXY) was perched at over 20-year highs, it was the inflation hedge of choice, however, its recent fall from grace has renewed interest in silver and other precious metals, which has also gone a long way in pushing silver prices upwards.

However, silver is still likely to face some downward pressure in the next few months when the US Federal Reserve hikes interest rates further, setting the state for the Bank of England and the European Central Bank to carry on with their aggressive monetary tightening policies as well.

According to Capital.com analyst, Piero Cingari, “Silver is posting its second-best daily performance of the year, rising by nearly 6.7% today. This has been fueled by a lower-than-expected ISM Manufacturing PMI of 50.9 vs 52.2 expected, which has pushed the US dollar and Treasury yields lower.

The next resistance levels on the daily chart are 20.9 (mid-August highs) and the psychological 21. The daily RSI reached its highest level since April.A break above 21 could then allow for a test of the 200-day moving average at 21.9.

However, current market momentum is totally driven by expectations of a Fed policy shift, which might be a bit premature here. Precious metals are not yet out of the woods here and could suffer some setbacks in the coming weeks amid Fed hawkish speaks.” 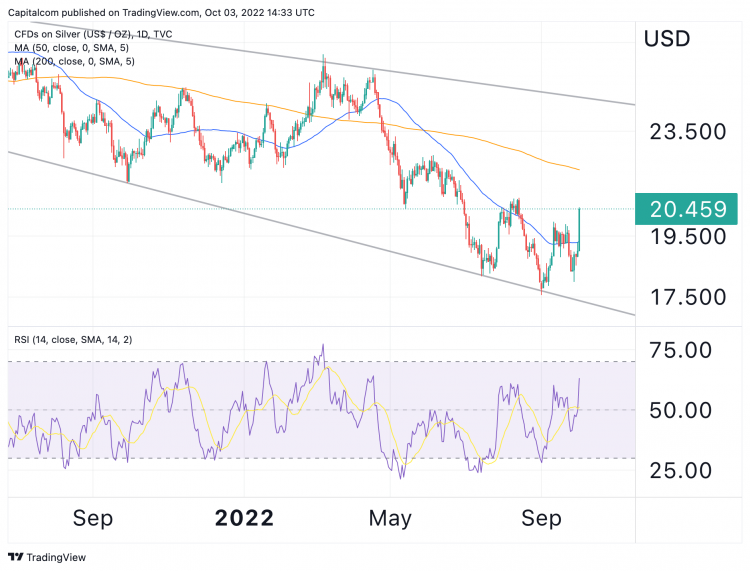 What is the outlook for silver for the rest of 2022?

A recent Organization for Economic Cooperation and Development (OECD) report has slashed global economic growth forecasts to about 2.1% for 2023. This is likely to go a long way in boosting silver prices, mostly through safe haven demand, as investors are still likely to remain cautious and anxious about economic growth and the threat of recession.

This may possibly help silver remain above the critical $20 per troy ounce level that it has finally managed to clear on Monday following weeks of struggle. According to a recent Commitment of Traders report by the Commodities Futures Trading Commission (CFTC), silver investors are currently the most bearish they have been in years, causing silver sentiment to hit an about 3-year low.

However, looking back at past incidents of similar extremely low sentiment, of which there are about 6 since 1995, these lows have often been bullish signals for the precious metal to bounce back. In the periods following the lows, silver has often seen gains of about 6.5% in the next 3 months, 10.3% in the next 6 months and 12.5% in the next one year.

Considering that silver was trading at about 2.5 year lows a month back, on the 1st of September, it is likely that we are now in the bullish phase that has historically followed such extreme lows in past years. This could mean that silver may continue to see gains in the short-term at least.