Corn price forecast for 2022 and beyond

Corn has returned to pre-conflict prices as the result of an agreement between Ukraine and Russia that has allowed exports of grain and other agricultural products to resume from selected Ukraine Black Sea ports, following a five-month blockade.

Pressures from lower crop condition ratings and severe global droughts have kept prices high, however, and the commodity is currently trading 15% above the opening price this year, and approximately 70% above the 2020 opening price of $3.915.

How far will these pressures push the price of the grain, and what is the latest corn price forecast?

Like a number of commodities, the corn price is driven by supply and demand factors, largely dominated by US agricultural policies according to the US Department of Agriculture (USDA).

Other effects on the supply side include seasonal factors on the outcome of harvests, beginning stocks of corn and yield. Demand factors include industrial use of grains in animal feed and for human consumption, as well as supply side effects in foreign countries affecting export demand.

Prior to the great financial crisis, the price of corn futures typically fluctuated between $2.00 and $3.00, except for the 1996 grain shock which pushed the price above $5.00. The financial crash set off more insecurities in 2008, causing another spike to $7.37.

According to the International Monetary Fund (IMF), economic pressures, stagnant productivity for corn production, and some disappointing harvests put upward pressure on corn prices in 2011, bringing them to record highs of around $8.06 by 2012. Since then, even in more stable times, the grain had settled at a new, higher support just above $3.00.

The price of corn skyrocketed following Russia’s invasion of Ukraine, and the commodity met a new nine-year high, sparking concerns about the price of food for the world’s poorest communities. Since then, the United Nations food agency’s world price index has fallen for a fifth consecutive month as improved supply prospects come into effect with the Russia-Ukraine grain agreement.

The USDA estimates 55% of the US corn crop is in good or excellent condition, down from a 61% reading on 24 July. Severe droughts have also cut into crop yields, and the Chicago Board of Trade corn futures price recorded a two-month high on 29 August at $6.83 a bushel. It has become clear that yield concerns have become significant enough to boost prices to date.

The price remains elevated. In the year-to-date, the price is up almost 15% since the start of the year, but is currently trading down 17% from April’s highs, which saw the commodity trading above the $8.00 mark. At the time of writing, corn is trading at 665.26¢ or approximately $6.65. 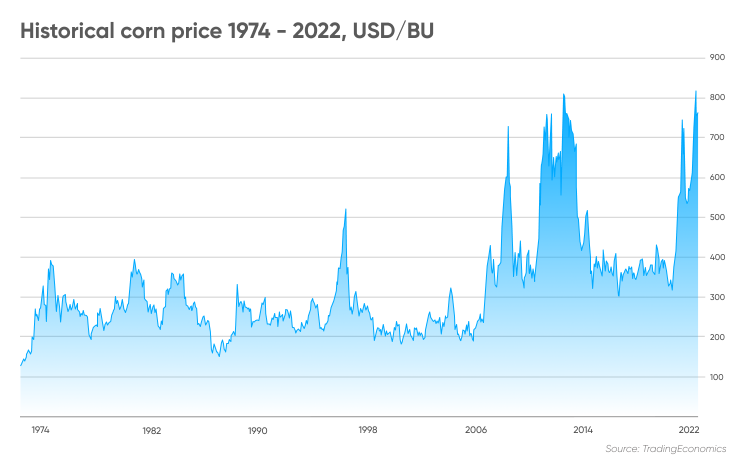 A technical analysis of corn as of 2 September flashed predominantly bullish signals.

Meanwhile, the relative strength index (RSI) was neutral at 61.261. A reading of 70 or above would initiate that the asset is overbought, while a reading of 30 signals an undervalued condition.

Russia’s invasion of Ukraine has put a number of commodities in a state of flux, from Russian oil and natural gas to Ukrainian wheat, pushing the prices up to historic highs, increasing concerns of a famine in the developing world.

Corn is another commodity exposed to the production and distribution problems caused by Russia’s invasion of Ukraine. According to indexmundi, the US and China are responsible for more than half the world’s total corn production, with Brazil, the EU and Argentina other big hitters. Ukraine, while relatively modest, is still the eighth largest global producer.

That, though, ignores the fact that the US and China will consume a lot of what it produces, unlike Ukraine. 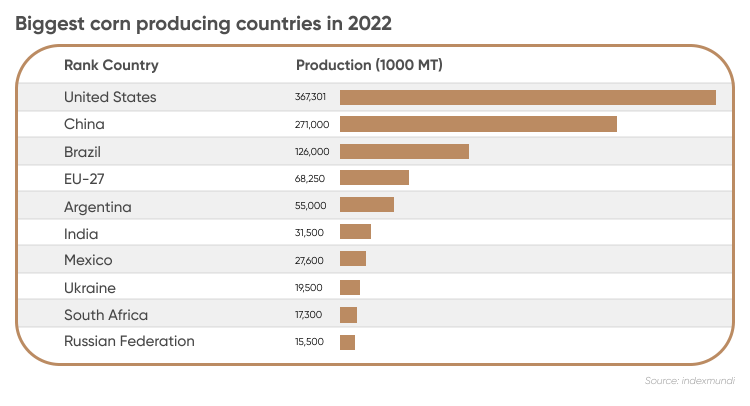 While only accounting for a small share of production, the country accounts for 11% of global exports, adding disproportionate pressure on the rest of the globe. Those exports have been largely wiped out as a result of the closure of Ukraine’s Black Sea ports under the Russian assault.

Only half of the sunflower and corn that was being shipped pre-conflict is being exported now, according to JPMorgan.

“We hold concerns for the consistent availability of corn and sunflower oil exports through the peak period of shipments in the second half of this year,” Tracey Allen, agricultural commodities strategist at J.P. Morgan Research, said in a study.

Ukrainian farmers haven’t been deterred by shelling from the Russian army or threats to the status of exports, planting more corn in response to demand, according to the USDA, although the lifting of limitations has greatly improved trade prospects.

Another uncontrollable pressure on corn is weather. Good weather saw corn prices partially retreat recently, but it could be short-lived based on the ‘La Niña’ winter engulfing parts of the US.

“Weather is a very material driver here and now,” J.P. Morgan Research’s Allen said in a research paper. “We’re anticipating some deterioration in crop conditions, building of soil moisture deficiencies and pullback in the yield potential of key grain and oilseed crops – at a time when we have critically tight exportable supplies of agricultural products available to the world market.

“We continue to see further upside price risks for milling wheat amid persistent challenging growing conditions in the U.S.”

Research from S&P Global showed that dry weather is expected to force US corn contraction down in 2022/23, adding to price pressures.

In the long run, the supply of maize (corn) is expected to decline as a result of climate change, according to a NASA study published in Nature Food, with yields forecast to drop 24% by 2030.

Corn price forecast for 2022 and beyond

JPMorgan’s research suggests that there is a potential 20-30% upside on the basis of supply-side disappointments.

“When we look at the extent to which prices have collapsed, we are now seeing new crop prices in 2023 track below the cost of production – for corn and for wheat. The market is really in need of a supply response,” said Allen.

“We highlighted that Russia and Ukraine combined represent one of the world’s key breadbaskets, accounting for around one-quarter of global exports of wheat and corn,” they said.

According to corn price forecast and analysis by CRM Agri shared on Feed Navigator, it was expected that the prices would remain elevated through 2022 and 2023.

“Corn markets risk coming under pressure as harvest looms, but this is far from a fully bearish market,” CRM Agri said.

“The drought impacted Brazilian crop is likely to drive additional new crop demand to US markets. The war in Ukraine is supporting old crop demand, while China has continued to purchase US corn, and with every additional sale, US stocks decrease.”

Note that analyst predictions can be wrong. Forecasts shouldn’t be used as a substitute for your own research. Always conduct your own diligence and remember that your decision to trade or invest should depend on your risk tolerance, expertise in the market, portfolio size and goals.