US corn futures prices retreated from three-month highs enjoyed earlier this month and from the multi-year highs achieved in April on a bearish demand outlook and the resumption of grain shipping from ports in the Black Sea following an export deal between Russia and Ukraine.

The Black Sea Grain Initiative agreement, brokered by the United Nations and Turkey in late July 2022, allowed Ukraine to resume the export of its grains, including wheat, corn, soybeans and rapeseed, from selected Black Sea ports.

The most active December corn futures contract at the Chicago Board of Trade (CBOT) touched 696¢ or $6.69 per bushel (BU) on 13 September – the highest price since late June – after the US Department of Agriculture cut its forecast for this year’s harvest. Corn futures have given up their gains, but still hovered at two-month highs of $6.80/BU, as of 20 September.

Will corn futures remain elevated this year? How big is the impact of Ukraine’s supply and projected slowing demand on the US corn futures price?

In this article we dive into historical performance, news behind recent price actions and the latest analysts’ predictions on corn futures prices.

What are corn futures?

Corn is one of the most important agricultural commodities. The native grain of the America continent has various uses, including as food, livestock feed, sweetener and biofuel.

Corn's many applications make it one of the most-widely traded commodity futures. Corn futures began trading at the CBOT on 2 January 1877, according to historical data from the Chicago Mercantile Exchange Group (CME). (In 2007, the CME and CBOT merged.)

With a daily trading volume of 350,000 futures contracts, corn futures are the most liquid and active market in grains, according to the CME.

Apart from trading at the CME, corn futures are also traded on the NYSE EuroNext, China’s Dalian Commodity Exchange and the Japan Exchange Group.

Weather and oil prices – fuel-grade, corn-based ethanol is a substitute for fossil fuels – are two less predictable and complex factors that affect corn futures prices. Corn consumption demand, whether for direct household consumption or industrial demand from the food and beverage and animal feed industries, can all have an impact on the price of corn.

According to economic data provider TradingEconomics, CBOT corn futures hit a record high of $8.43/BU in August 2012. That price emerged after the US Department of Agriculture (USDA) forecast US corn output to fall 13% to 10.8bn in 2012 as severe drought hit the country’s corn belt.

Since reaching that record high, corn prices have fallen, but have been trading steadily above $3.00/BU to $5.00. Even during the onset of the Covid-19 pandemic in 2020, which crushed demand for a range of commodities, the grain did not fall below $2.00, gaining 24.8% over the year.

Corn continued to rise in 2021 on rebounding demand as economies gradually reopened. US corn futures gained about 22% over the course of 2021. 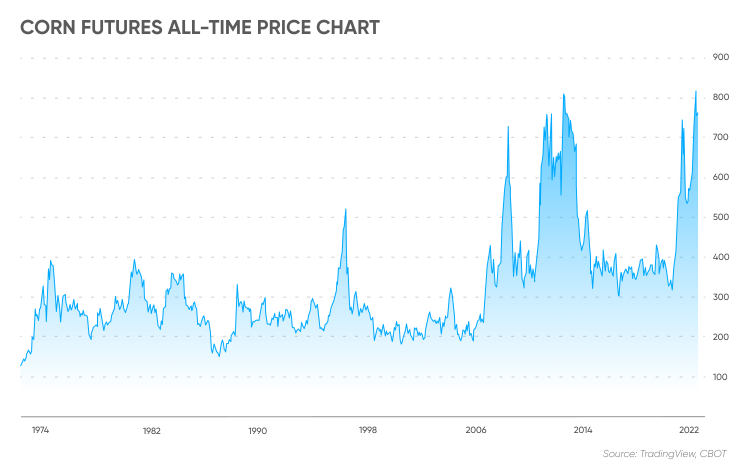 US corn futures prices have remained elevated since the beginning of 2022, opening the year at around $5.90/BU.

Corn prices shot up following Russia's invasion of Ukraine. The price reached a nine-year high of $8.27/BU in late April amid supply concerns following Russia’s blockade on Ukraine’s main Black Sea ports. Prices gradually eased in the following months, with the price supported by an expected decrease in US production and exports.

The United States Department of Agriculture (USDA) estimated that, as a result of severe drought, 55% of the US corn crop was in good or excellent condition, as of 29 August, down from a reading of 61% on 24 July.

The USDA expected US corn production in 2022/2023 to drop 415m bushels from August to 13.9bn bushels on reduced harvested area and yield, according to the USDA’s World Agricultural Supply and Demand Estimate released on 12 September. It also cut forecasts for US corn exports by 100m bushels to 2.3bn.

The price has increased about 15% so far this year, but is currently (20 September) trading almost 24% below April’s highs at around $6.82/BU.

Virginia McGathey, President of the McGathey Commodities Corporation, said that corn futures have fallen as the market has anticipated the start of the US corn harvest season, which usually begins in September, and expected higher supply from Ukraine following the Black Sea Initiative.

“The corn was a little bit lower than harvest is ready to begin right now, adding pressure to the futures, but you know, as I said before the speculators are really adding to their long positions,” said McGathey on 19 September in a CME Group video interview.

New estimates that Ukraine may be able to ship 20m tonnes of corn – double the initial forecast of 10m tonnes – put pressure on the market, she added.

Based on Joint Coordination Centre (JCC) data released by the United Nations (UN), corn accounted for 51% of 3m tonnes of grains that left Ukraine from 1 August to mid-September 2022. JCC is a body established in Turkey to oversee the implementation of the Black Sea Initiative. It consists of senior representatives from the Russian Federation, Turkey, Ukraine and the UN.

In a corn futures market analysis on 19 September, PriceFutures Group analyst Jack Scoville wrote that concerns about corn demand from the US and elsewhere have weighed on the commodity’s price in the US:

“There are reports of less cattle and that means domestic demand could be hurt. Ethanol demand ideas took a hit last week although Crude Oil moved higher. There are also increasing concerns about demand with the Chinese economic problems caused by the lockdowns creating the possibility of less demand as South America has much better crops this year to compete with the US for sales.”

China was the top importer of US corn in 2021, according to USDA data. The country has been battling a fresh surge of Covid-19 since March and has imposed lockdowns in affected cities.

“Although we note that the weaker outlook for global economic growth through 2022 and into 2023 may weigh on animal feed demand via reduced meat consumption,” the firm said.

On the other hand, increased fossil fuel prices may boost demand for corn-based biofuels in markets where such fuel is dominant or one of the leading variants of alternative fuel, such as in the US, it added.

As Ukraine’s supply is entering the market and demand may soften, what will be the forecast for CBOT corn futures?

“We anticipate that corn prices will find further support – and so, remain above their pre-2022 levels – in a deteriorating outlook for global production in 2022/23,” the firm said.

The Russia-Ukraine conflict partly contributed to the larger-than-expected fall in global corn output, Fitch wrote. The firm expected the global corn market to fall into a deficit of 8.8m tonnes in 2022/2023 after generating a surplus of 35.1m tonnes in 2021/2022.

On 20 September 2022, Wallet Investor noted that corn was a “not so good long-term (one year) investment.” However, it forecast the price of the grain would nonetheless rise in four years’ time.

Remember that analysts’ and price forecasting services predictions can be wrong. Forecasts shouldn’t be used as a substitute for your own research. Always conduct your own diligence. Remember that your decision to trade or invest should depend on your risk tolerance, expertise in the market, portfolio size and goals.

Crude oil prices: Is the downward trading trend over?

Capital.com Corn Futures Prices | Everything You Need to Know