It’s been a mixed week on the global commodities market. The slight pullback in the US dollar has brought some relief to the metals complex. On the other hand, geopolitical factors – gas regulation in Europe and G-7 efforts to put a cap on Russian oil – have generated strong volatility in the energy market.

The Bloomberg Commodity Index (CRB) is down 2.2% for the week, owing primarily to the poor performance of energy.

US natural gas prices experienced their worst weekly performance since mid-June, falling 9% over the course of the week.

WTI was down 0.9%, Brent crude dropped 1.4% but both oil benchmarks attempted a strong rebound by the week close.

Let's take a look at the most recent technical signals on the gold, silver, oil, and natural gas charts.

Metals and energy commodities: Performance as of September 9, 2022 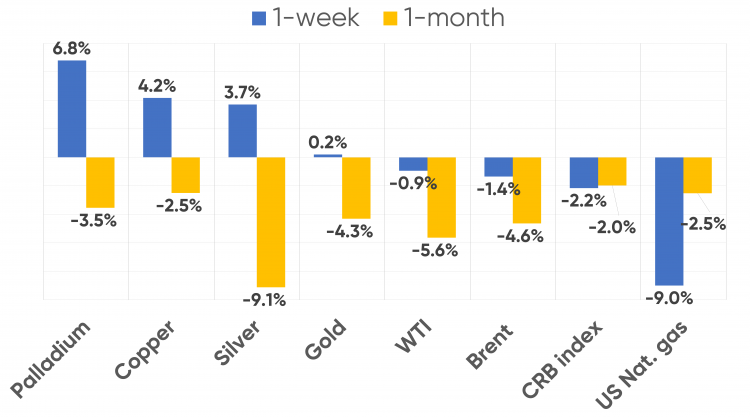 Gold technical analysis: not out of the woods yet 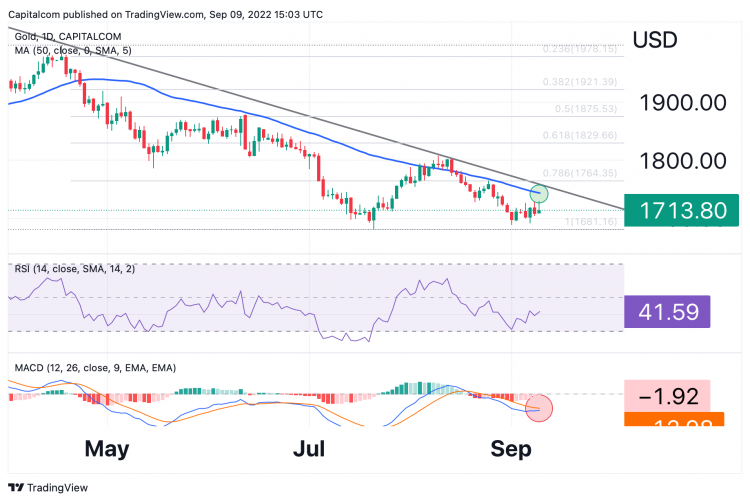 After dipping near 2022 lows in early September, gold prices attempt a tentative recovery.

If the price action stays positive over the next few sessions, the MACD could form a bullish crossover below the zero line. This has given the precious metal some short-term breathing room when it occured previously this year.

However, a strong dynamic resistance is provided by the 50-day moving average, which is located at $1,746. This zone is near the bearish trendline from March highs, which saw a heavy selling pressure when it was touched in mid August.

Overcoming the $1,750 barrier will continue to be the key resistence for gold prices in the short run. Instead, gold prices must decisively clear the 50% Fibonacci retracement level (2022 low to high), which also sits at June's highs, to materially reverse the major bearish trend. 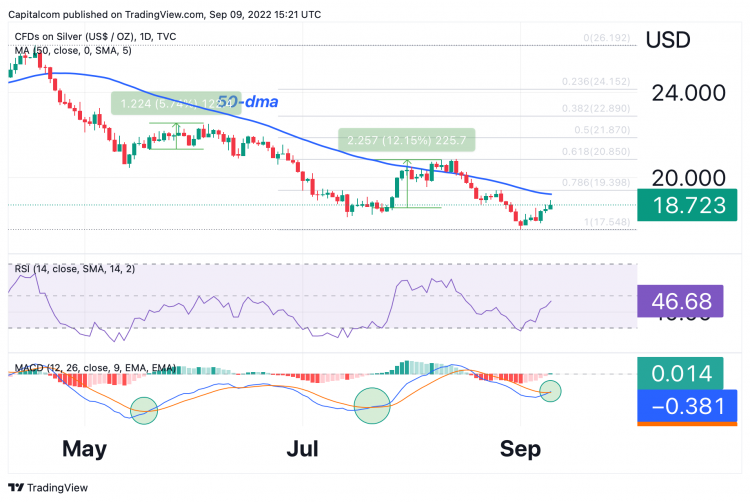 Much of what has been said for gold also applies to silver, as the two precious metals have continued to show a very strong price correlation lately.

The most notable distinction in the silver's daily chart is that the MACD has has just given the signal of the bullish crossover.

The next resistance for silver prices is represented by the 50-day moving average, which also sits at the 78.6% Fibonacci retracement (2022 low to high). 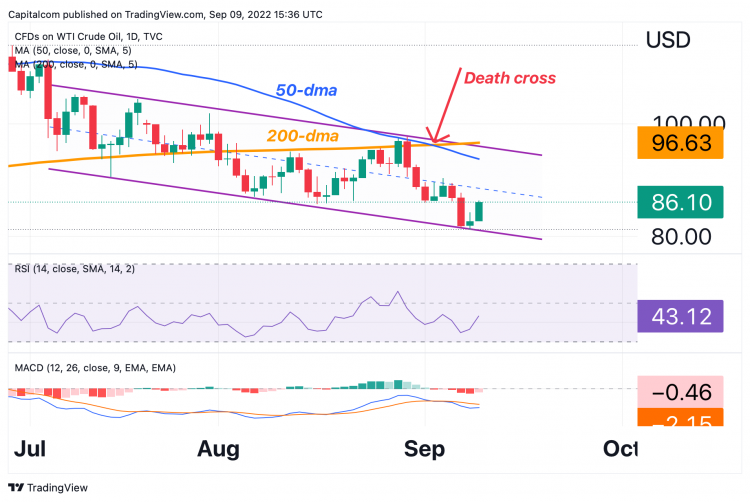 WTI oil prices formed a historic death-cross in early September, as the 50-day moving averaged crossed from above the 200-day one.

It's the first time since February 24, 2020 that a death cross appeared on the crude daily chart.

Prices have recently bounced off support represented by the bearish channel, which has been in place since early July.

Overall, the short-term trend is still bearish, even though recovering momentum may cause a very brief extension towards $90/bbl.

US natural gas technical analysis: buyers returned at the 50-dma

For the time being, the 50-day moving average has proven to be a difficult support to overcome by sellers. After just touching the zero line, the MACD line also attempts a recover.

Overall, the short-term bearish momentum seems losing a bit of steam, but a test of the level of $7.55 (61.8% Fibonacci retracement from high to low in 2022) is not something that should be ruled out in the next sessions.

Despite this, the major bullish trend has not yet completely reversed, as prices still hold above the key $6.80 mark (50% Fibonacci level).