Since the start of the year, Chevron and other energy companies’ stock prices have been lifted by soaring crude oil prices triggered by supply concerns after Russia’s invasion of Ukraine in February.

While oil prices have remained elevated, they also have given up gains as risks of global recession loom, rising concerns of slowing demand. On the domestic front, US oil companies were also facing political pressure to tame sky-high fuel prices.

As energy stocks typically follow oil prices movement, will macroeconomic headwinds put a pause on Chevron’s rally? In this article, we look into Chevron’s financial performance, latest news that affect its stocks, and the latest Chevron share price forecast from analysts.

Like its oil and gas-producing peers in the energy sector, Chevron enjoyed robust growth in its stock price in the past year on rallying oil prices. Rebounded demand from countries loosening Covid-19 restrictions had outstripped supply as producers struggled to recoup output after demand plummeted during the pandemic, leading oil prices to historic lows.

The prospect of high energy prices has attracted investors to energy companies’ stocks, including the CVX stock price that has risen around 21% from $119.26 at the start of the year to the closing price of $144.77 on 24 June.

Oil prices have fallen in the last weeks as fears about slowing global economic growth trumped concerns about supply disruptions caused by the Ukraine conflict. Expectations about the slowing growth of China’s oil demand after the country reimposed strict restrictions to tackle fresh Covid-19 outbreaks have also added pressures on oil prices.

Fitch Solutions said in a note on 23 June that a recovery in China’s demand could help boost demand in the latter part of the year:

“The demand-side lift from the post-pandemic recovery has largely been exhausted and consumption growth has been brought under rising pressure from spiralling energy prices and a broader cost of living crisis.
“However, broader recession risks continue to weigh and are currently dragging down on oil prices through sentiment channels. The supply-side drivers, though, remain bullish.”

In the US market, US oil refiners, including Chevron and ExxonMobil (XOM), have been under-pressure from the government to increase fuel to cool soaring fuel prices. Surging fuel prices have contributed to accelerating US inflation to four decade high, with gasoline prices hitting above $5 per gallon for the first time on record in mid-June.

In a letter to oil companies on 15 June, US President Joe Biden criticised the companies, saying passing historically high refinery profit margins directly to American consumers was not acceptable. Chevron CEO Mike Wirth responded to Biden, saying criticising and vilifying the industry would not help address the sky-high fuel prices and called on the government to work with his company.

In an interview with the Washington Post, Wirth had said it is unlikely a new refinery will be built in the US any time soon, noting:

“In a country where the policy environment is trying to reduce demand for these products, you are not going to find companies to put billions and billions of dollars into this.”

Chevron has been stepping up investment in renewable energy to adjust to energy transition. The latest was the acquisition of Renewable Energy Group on 13 June. The deal is valued at $3.15bn, and is expected to help the company achieve its goal of growing its renewable fuels production capacity to 100,000 barrels per day (bpd) by 2030, the company said in a statement on 28 February.

The San Ramon, California-based oil and gas explorer reported earnings of $6.3bn in the first quarter of 2022 – up almost fourfold from the $1.4bn earned in the same period in 2021.

Wirth said in the company’s earnings call on 29 April:

What is your sentiment on CVX?

Give CVX a try

Start trading
or
Try demo
“And in the first quarter we continued to make progress, delivering book returns in the mid-teens, investing to grow both our traditional and new energy businesses, and returning even more cash to shareholders while maintaining an industry-leading balance sheet.”

From its US upstream operation, the company’s sales price of crude oil and natural gas liquids averaged $77 a barrel in the first quarter of 2022, up from $48 year-over-year (YoY). It sold natural gas at average $4.10 per thousand cubic feet in the quarter, up from $2.15 in the previous year’s first quarter.

In the earnings call, Pierre Brebber, Chevron’s CFO, attributed the lower production to several factors, including the expiration of production permit at its Rokan block in Indonesia and lower output in Thailand as it approached the end of the concession.

However, higher production growth in its Permian Basin and the absence of Winter Storm Uri impacts partially offset the fall. Permian Basin reached a record oil and gas output of 692,000 barrels of oil equivalent (boepd) in the first quarter.

On the downstream operation, Chevron processed 915,000 barrels per day (bpd) of crude oil in the first quarter of 2022, up 4% from the same period a year ago. Refined product sales were up 16% YoY to 1.22 million bpd due to higher fuel demand as Covid-19 travel restrictions eased.

For the second quarter, Chevron raised its 2022 guidance for Permian Basin’s output to 700,000 bpd to 750,000 bpd, a 15% increase from 2021. The company expected lower production for several additional reasons, including planned turnarounds at the Wheatstone liquefied natural gas (LNG) project in Australia and Angola LNG, and the expiration of the Erawan concession in Thailand, Brebber said.

However, he added that Chevron runs the possibility of rapid declines in world demand, which could prevent it from fully developing its reserves:

“Our research suggests oil demand will not decline materially for several more decades, implying more supply will be needed and the risk of stranded assets for Chevron is low. However, greater adoption of electric vehicles in the US, specifically California, could reduce demand for refined products, impairing the value of Chevron’s refineries.”

For the general market outlook, BMO Research in its note on 6 June wrote that it expected crude oil prices to move higher over the next several months due to energy shortages. Crude oil would get fundamental support from soaring petroleum products prices:

“We believe that petroleum product prices could continue to outpace crude oil prices, leading to a continuation of strong margins and record financial results for the downstream segments of integrated oil and gas companies.” 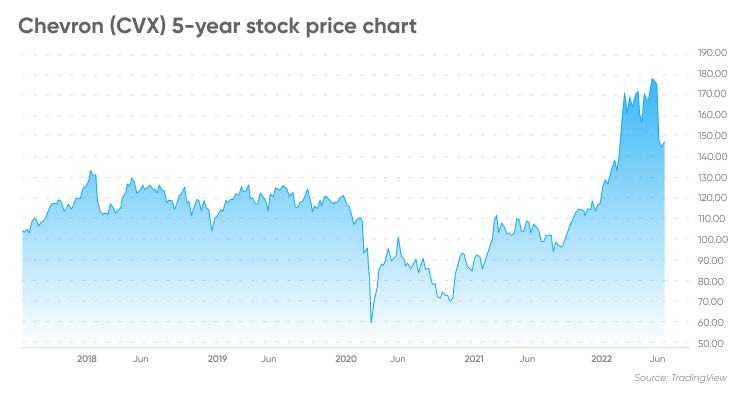 A consensus Chevron stock forecast of 17 analysts polled by TipRanks rated the stock a ‘moderate buy’, with nine analysts recommending a ‘buy’, seven a ‘hold’ and one put a ‘sell’. The analysts offered an average target price of $180.59 a share.

In its Chevron share price forecast, TradingEconomics estimated the stock to trade at $144.43 by the end of this quarter. The economic data predicted CVX stock to be at $133.21 in a year.

Stock analysis companies typically do not offer long-term price forecasts. However, algorithm-based price forecasting service Wallet Investor was less bullish on the CVX stock price, saying it was a not so good long term (one-year) investment. However, the service forecast the share to increase until 2025.

When looking for Chevron stock predictions, remember  that estimates from analysts and price prediction sites can be wrong. Projections are based on fundamental and technical analysis of CVX stock's previous price trends. Past performance does not guarantee future outcomes.

Conduct your own research, and keep in mind that your decision to trade is influenced by your risk tolerance, market expertise, investment portfolio spread, and level of comfort with losing money. Never invest money that you cannot afford to lose.