Bank of Canada Hikes 50bps But Signals Pause is Looming

In its final monetary policy meeting of the year, the Bank of Canada announced a 50bps in the overnight rate to 4.25%. This had been a slight surprise to markets given that money markets had priced in around 30bps of tightening. In turn, this prompted a knee-jerk move higher in the Canadian Dollar with USD/CAD falling to session lows of sub 1.36. However, there was a dovish tilt with the statement in which the central bank appears to indicate that their hiking cycle is drawing to a close. The bank stated that the Governing Council will be considering whether the policy interest rate needs to rise further to bring supply and demand back into balance and return inflation to target.

Now, of course, the bank will remain data dependent as such, should inflation remain sticky, alongside a tight jobs report, there will be little choice but to continue hiking. That said, the bar to hike has increased somewhat going forward.

Looking more specifically at the Canadian Dollar, interest rate hikes haven’t had a lasting impact on the Loonie. This was most apparent after CAD failed to hold onto gains following a surprise 100bps hike in July. As such, I suspect a similar lack of lasting impact on the currency following today’s decision. Oil prices remain on the back foot and the deteriorating risk environment is the two prominent determinants for CAD price action at present. Earlier today, Russian President Putin hardened his stance with regard to the war in Ukraine, having talked up Russia considering nuclear weapons as a response to an attack which further weighed on risk sentiment. 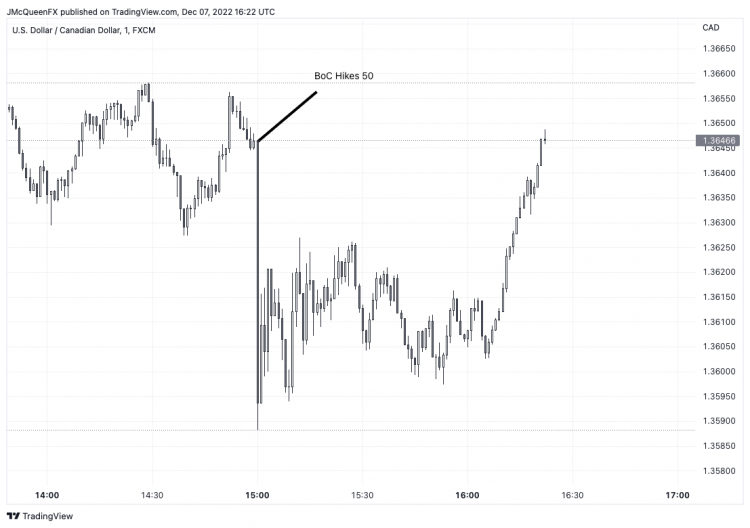 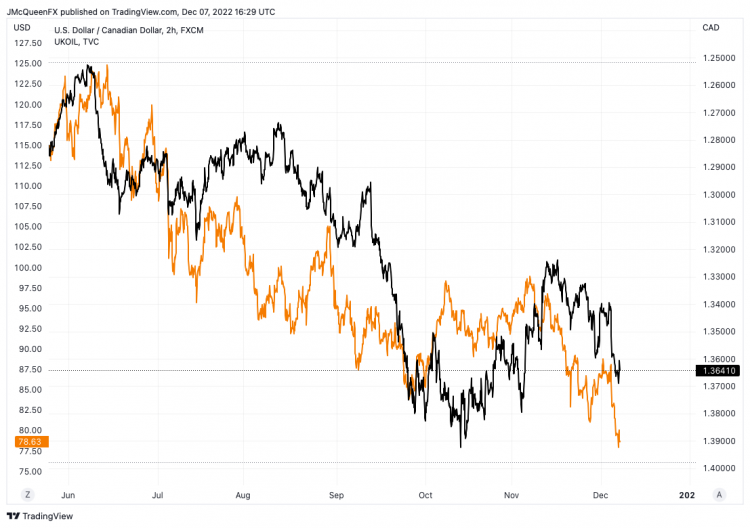 EUR/USD 1.08951
Trade
-0.860%
USD/JPY 128.524
Trade
-0.340%
GBP/USD 1.22110
Trade
-1.300%
AUD/USD 0.70575
Trade
-1.120%
GBP/JPY 156.939
Trade
-1.630%
The difference between trading assets and CFDs
The main difference between CFD trading and trading assets, such as commodities and stocks, is that you don’t own the underlying asset when you trade on a CFD.
You can still benefit if the market moves in your favour, or make a loss if it moves against you. However, with traditional trading you enter a contract to exchange the legal ownership of the individual shares or the commodities for money, and you own this until you sell it again.
CFDs are leveraged products, which means that you only need to deposit a percentage of the full value of the CFD trade in order to open a position. But with traditional trading, you buy the assets for the full amount. In the UK, there is no stamp duty on CFD trading, but there is when you buy stocks, for example.
CFDs attract overnight costs to hold the trades (unless you use 1-1 leverage), which makes them more suited to short-term trading opportunities. Stocks and commodities are more normally bought and held for longer. You might also pay a broker commission or fees when buying and selling assets direct and you’d need somewhere to store them safely.
Capital Com is an execution-only service provider. The material provided on this website is for information purposes only and should not be understood as an investment advice. Any opinion that may be provided on this page does not constitute a recommendation by Capital Com or its agents. We do not make any representations or warranty on the accuracy or completeness of the information that is provided on this page. If you rely on the information on this page then you do so entirely on your own risk.