Platinum prices have been on the rise for the last month, trading at about $922 per troy ounce at the time of writing, with a weekly rise of about 6.7% and a monthly rise of about 8.0%. Now, platinum prices could see even more of a boost as Indian platinum imports soar to record highs, because of an interesting tax loophole.

Platinum has also been benefiting from a weaker US dollar (DXY), which has fallen somewhat over the last few trading sessions after soaring to near 20-year highs recently. Not only that, but the recent US ISM Manufacturing PMI data for September also came in lower than expected. This has led to speculations of the US Federal Reserve slowing down its large interest hikes somewhat, by taking into account that they could potentially propel the economy into recession.

Why are Indian platinum imports soaring?

Indian platinum imports have recently touched record highs due to a tax loophole found in the recently changed import taxes. In this case, the import tax on gold was upped by about 15%, however, the tax on platinum and silver was kept the same. This was a significant change, as earlier the taxes on all three metals were identical, at about 10.75%.

This move has caused India’s September 2022 imports of platinum to increase year-on-year from 11.4 tonnes to 27 tonnes. This figure is higher than India’s total imports of platinum for the whole of 2021, which came up to about 10.59 tonnes, according to the Ministry of Commerce and Industry.

The majority of this platinum is used for jewellery, with India being a huge consumer of jewellery, especially gold and jewellery. Platinum jewellery is gaining more popularity in India at the moment, with it being considered something of a status symbol and marketed towards younger consumers who prefer it over traditional gold.

However, platinum is still pressurised by disappointing auto vehicle sales in the US as well as China, which are key vehicle producers. As platinum is also used in auto catalysts in vehicles and derives much of its demand from them, this is going a long way in capping the metal’s recent gains somewhat.

The precious metal was trading around 14-day highs at the time of writing at about $922 per troy ounce, with the next level of resistance likely to be around the $940 per troy ounce mark, which the metal has been struggling to rise above since the 16 August.

The Relative Strength Index (RSI) has also dipped below 30, to 29 briefly on the 1st September, indicating oversold levels, which highlighted that platinum may soon see an upward push again. This has been proven by the metal’s 12% surge since then. 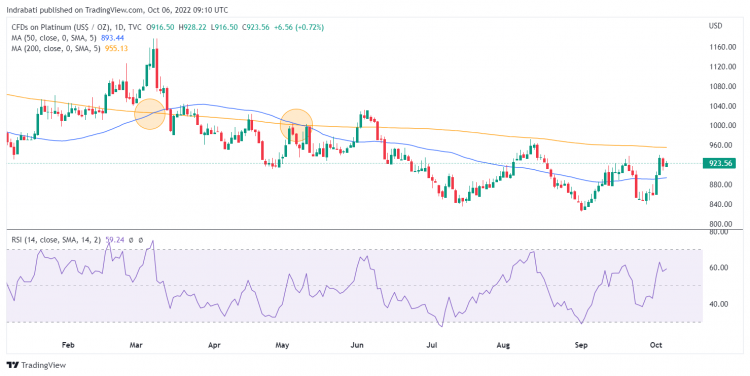 What is the platinum outlook for the rest of 2022?

The platinum outlook for the rest of the year is largely determined by macro factors such as a falling US dollar (DXY) and rising US interest rates, which may play conflicting roles in determining the direction of platinum as well as other precious metals.

Not only that, but platinum could also hugely benefit from green hydrogen demand for the rest of the year, as platinum is used widely in hydrogen catalysers. This is even more likely ever since the US Inflation Reduction Act was passed, which has allocated about $460 billion more to renewable energy projects.

Investors are also watching the direction of the Russian war keenly, as this will determine the extent of the energy crisis and could call for green hydrogen projects to progress quicker than planned, to supply more renewable energy. In this case, platinum prices are likely to rise as the metal is in more demand.

In addition to this, wage talks between Sibanye-Stillwater (SBYSF) and South African labour unions will be in focus, as South Africa is now the largest supplier of PGMs. In case of more disagreements, the platinum market may see more tightness, thus leading to higher prices.