Can gold shine again in the wake of the IMF stagflation warning?

How will gold prices react to the International Monetary Fund’s (IMF’s) updated growth and inflation estimates, which expressed heightened concerns about an impending stagflation in 2022?

This is undoubtedly one the most urgent question for investors in the aftermath of the IMF’s April 2022 World Economic Outlook (WEO) release.

Global macroeconomic projections for this year now show higher inflation and slower growth than in prior estimates, owing to the negative impact of the Ukraine war and increased chances of new supply-chain disruptions from China due to Covid-19 measures.

With greater risks to growth, longer-than-expected inflation, rising geopolitical risks due to the war in Ukraine and the greater fragmentation of the global economy, precious metals such as gold could find a fertile ground to shine again. 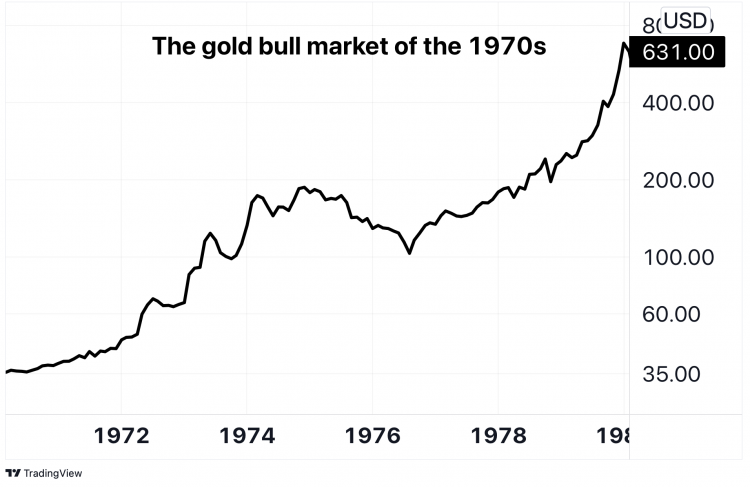 The gold bull market during the stagflationary era of the 1970s – Photo: Capital.com / Source: Tradingview

With lower growth and higher inflation, is the world on the verge of stagflation?

In its April 2022 WEO release, the IMF lowered its prediction for global growth to 3.6% this year, down from 6.3% in 2021 – a decrease of -0.8% from its January WEO projections. This was due to negative spillovers of the war in Ukraine.

The IMF forecasts 2.8%, 3.7% and 4.4% economic growth for the euro area, the US and China in 2022, respectively. The eurozone’s growth rate has been lowered by 1.1 percentage points from the prior forecast.

Among advanced economies, Germany has had the biggest drop in its growth estimates, down by 1.7%.

Inflation is now expected to remain elevated for much longer than in prior predictions. Interest-rate hikes, while deemed necessary to anchor long-term inflation expectations, might contribute to a further slowdown in economic growth.

The IMF baseline scenario raises the threat of ‘stagflation’, which typically characterises a period of low growth and high inflation.

However, unlike the prolonged stagflationary era of the 1970s, which was exacerbated by two oil crises, the IMF adds that the oil-price shock has been comparatively minor thus far, being that the world economy is less dependent on oil now than it was 50 years ago.

Nonetheless, given Europe’s significant reliance on Russian gas imports, economic growth might be further slowed, meaning inflation could be greater than anticipated.

How could gold prices react to rising stagflationary threats?

The IMF predicts precious metals will rise by 5.8% in 2022 and by 2.1% in 2023, which appears to be a rather lacklustre forecast. But there are some caveats to take into account.

It's worth noting that gold tends to perform well, not just during periods of severe stagflation – which is when the economy enters recession and inflation continues to climb – but also during periods of confidence crisis, when investors typically seek safety in stores of value.

The greatest dangers to the global economy today, as identified by the IMF, may be summarised by the following three key points.

Gold shines in times of economic and financial trouble 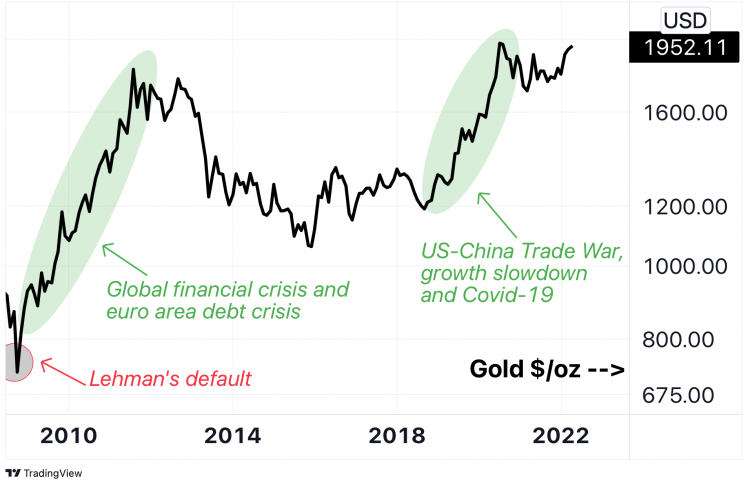 History shows that gold prices rose more than 150% after the Lehman Brothers went bankrupt in September 2008. This caused a global financial crisis and a eurozone sovereign debt crisis between 2010 and 2011.

Gold also responded brilliantly during the 2018 trade war between China and the US, which resulted in a global economic slowdown. The upswing in gold prices was further heightened by the March 2020 Covid-19 outbreak.

Investors should therefore once again bear in mind that during times of economic trouble and financial distress, gold can be regarded as the finest insurance to protect their wealth.

Copper/gold ratio: Is it the best indicator for value stocks?

Gold at a crossroads between Fed and war: Where will it go?

Will gold ETF inflows give the market the Midas touch?

Capital.com Can gold shine again in the wake of IMF stagflation warning?