CAC 40 forecast 2022: What will future hold for French stocks?

The CAC 40 (FR40) grew by almost 29% over the course of 2021, seeing it rank among the world’s top-performing stock markets. But after hitting a record high on 5 January 2022, the index has lost over 14%, faring significantly worse than the FTSE 100, which dipped just 5% over the same period.

Macroeconomic jitters have intensified as the French presidential election approaches and Europe faces the economic consequences of the conflict in Ukraine. In this fast-evolving environment, we take a closer look at the components of France’s key stock market index and its 2022 outlook.

The CAC 40 is France’s major stock market index, reflecting the performance of the 40 largest and most liquid stocks listed on the Euronext Paris. It is sometimes referred to as the France 40, or the FRA40.

The index includes a number of well-known global brands like L'Oréal (OR), Hermès International (RMS) and BNP Paribas (BNP), and is often used as a barometer of French (and broader European) economic health.

The past five years have been a rollercoaster for the index as seen on CAC 40 graph below, with its value buffeted by national, European and global events.

The French benchmark index initially climbed to a nine-year high of 5,442.10 on 8 May 2017 as Macron’s victory was confirmed, and the news also boosted the wider European markets. The German DAX 40 Index hit a record high after the result was announced, and the EUR/USD also saw a brief rally.

But after the initial optimism, the CAC 40 began to lose ground, dropping over 4.45% between 8 May and 7 August 2017 as questions about how Macron would implement his reform agenda began to harden.

The index dropped steeply between September and December 2018 losing over 15%  amid a period of significant market uncertainty over Brexit and European monetary policy rattled markets.

Yet the sentiment shifted and the French stock market enjoyed a bull run in 2019, with CAC 40 representing something of a haven amid uncertainty surrounding Brexit, Italian government debt and German political dysfunction. The index rose by almost 30% over the course of the year. 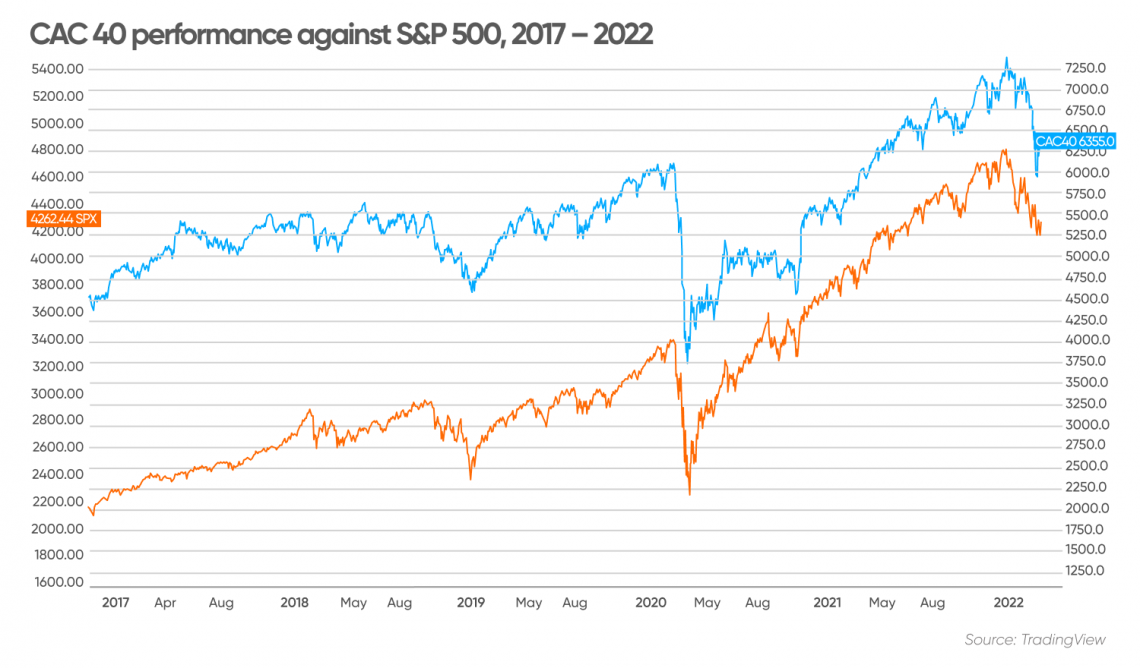 The CAC 40 performance in 2021 was driven by a solid post-pandemic recovery, with the French economy growing by 7% over the course of the year.

The index also benefitted from a global post-Covid spending splurge. Luxury goods retailer and the CAC 40’s biggest firm by market capitalisation, LVMH (MC) saw its share price rise 42% over the course of the year. The index’s other major players, Hermès and L’Oréal also saw 75% and 36% share price growth respectively.

Despite a wave of Omicron, 2022 started optimistically for the CAC 40. The index reached a record high on 5 January, and the outlook for the European economy looked bullish. Analysis from ING published in February forecast that “the economic rebound in France was dynamic in 2021, albeit uneven, and should continue in 2022 with inflation remaining more moderate than elsewhere in Europe”.

After a sunny start to the year, storm clouds have started to gather over the European economy. Ongoing concerns about rising inflation and the end of pandemic stimulus policies have been pushed to the foreground, exacerbated by the situation in Ukraine.

“The steeper losses across the major European markets reflects the fact that they are more reliant on energy supplies from, as well as trade with, Russia.”
by Columbia Threadneedle Investments

Analysts at Pictet Asset Management downgraded European equities to a ‘neutral’ rating in March, stating in a briefing that:

“We have, for example, become more cautious on the prospects for European equities. In Europe, the impact of sanctions against Russia will likely lead to higher inflation and lower growth, putting pressure on both stocks’ earnings multiples and corporate profits…Combine that with the more hawkish tone from the European Central Bank in recent weeks, and we think an overweight position in European equities is no longer warranted.”

Some of the CAC 40’s biggest players could also face a difficult period, especially if rising living costs begin to dent demand for luxury goods. Analysts have also voiced concerns about the impact of an energy crisis on European firms.

“The fact that shares in London have not been hit as hard as those across the eurozone is largely down to the greater importance of energy companies on the UK stock market: the likes of Shell and BP will benefit from rising oil prices,” said analysts from Columbia Threadneedle Investments in a 25 February briefing.

“The steeper losses across the major European markets reflects the fact that they are more reliant on energy supplies from, as well as trade with, Russia,” they added.

Then there is the French presidential election to contend with, which will see Macron standing for re-election in the April race. The latest polls (15 March) suggest him winning another term. Though markets were boosted by his 2017 victory, the presidential contest still has the potential to unleash significant volatility as it unfolds.

With so much market uncertainty, the CAC 40’s outlook for 2022 looks challenging. But there could be grounds for optimism, as 14 March saw European indices rise amid hope of diplomatic talks over Ukraine:

What is your sentiment on CAC?

Give CAC a try

“European indices rose in early trade on a small tide of optimism that there may be a breakthrough in diplomatic talks over Ukraine this week, but trading is set to stay volatile as intense fighting continues, while worries rise about China’s Covid caseload,” said Susannah Streeter, senior investment and markets analyst at Hargreaves Lansdown, in a briefing note shared with Capital.com.

It looks as though the CAC 40’s bumpy ride is set to continue.

The CAC 40 reflects the performance of the 40 largest and most liquid stocks listed on the Euronext Paris. Here we take a closer look at the five biggest companies by market capitalisation as of 15 March 2022.

LVMH Moët Hennessy Louis Vuitton (MC) is a luxury goods company, spanning over 70 brands. Its share price has increased by over 175% to €587($644.93) over the past five years, and it enjoyed strong growth over the course of the pandemic. However, its share price recently saw a steep drop – falling by almost 12% between 25 February and 15 March amid market uncertainty. 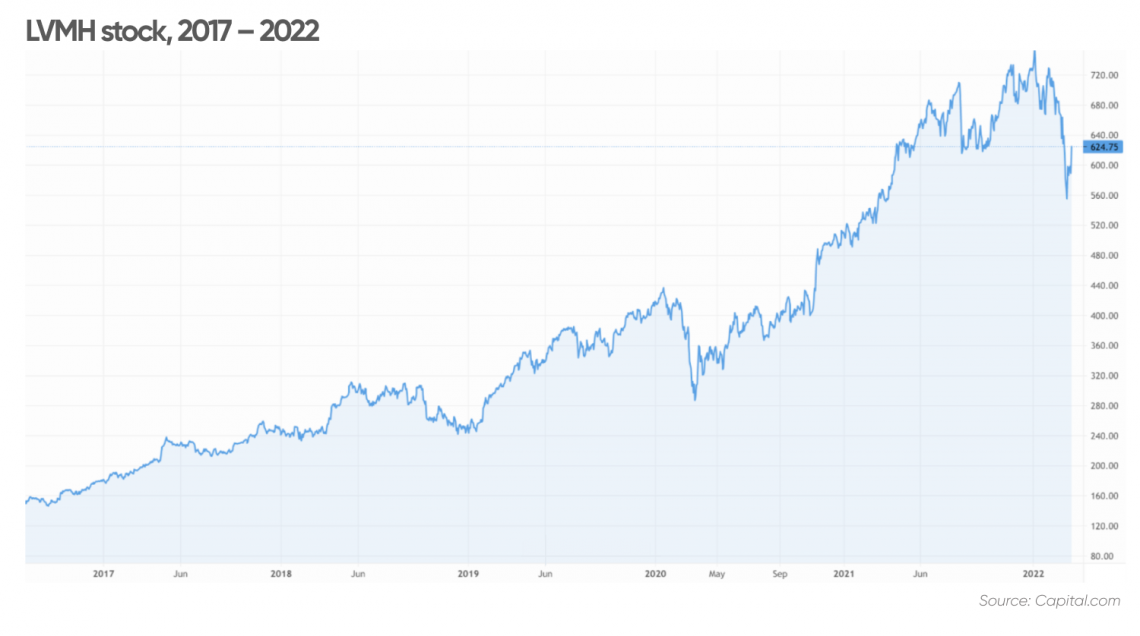 L’Oréal (OR) is a global cosmetics company, featuring a collection of brands including YSL, Urban Decay, Garnier and Maybelline. 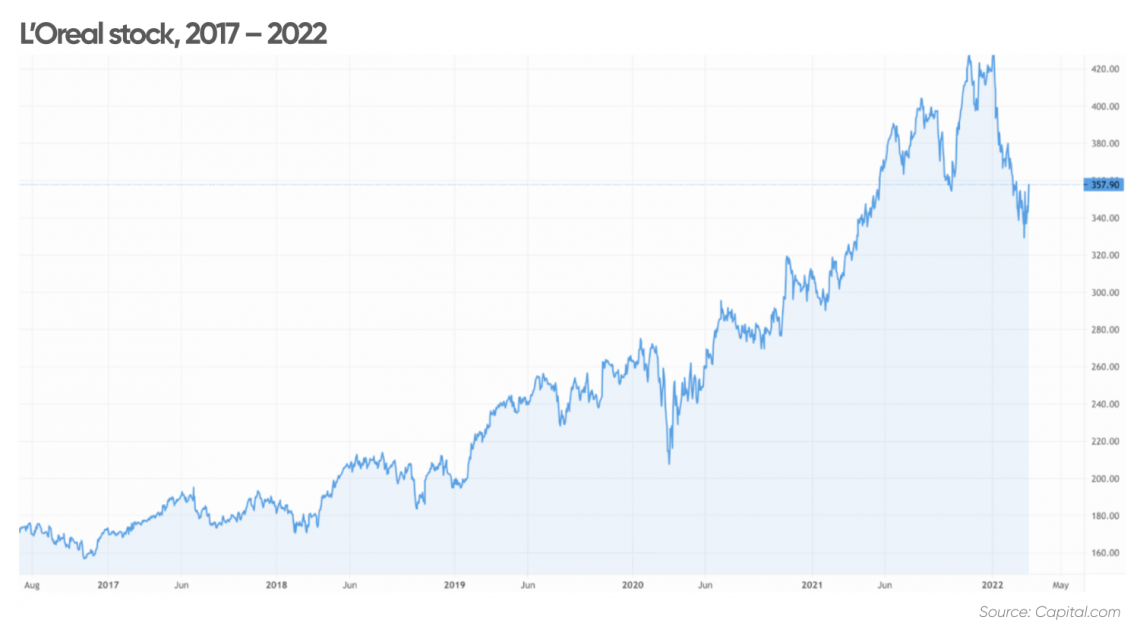 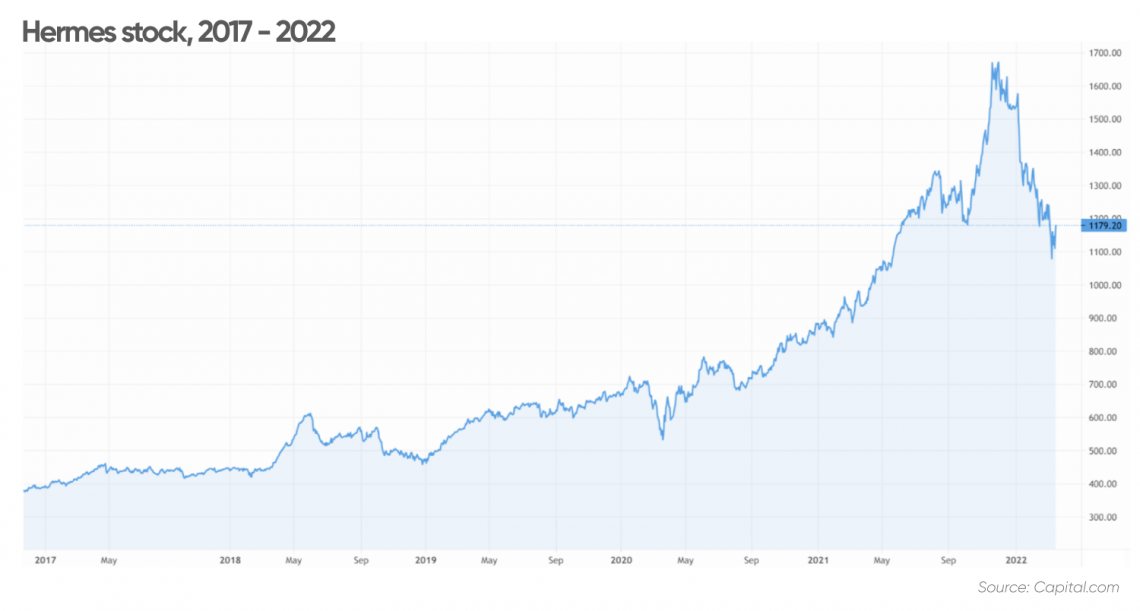 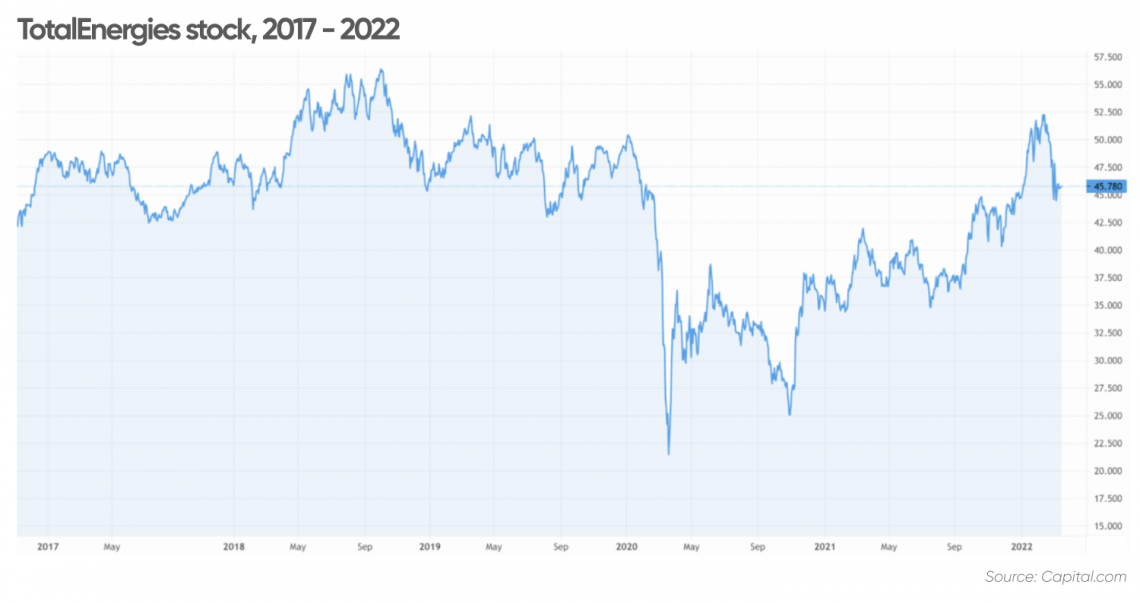 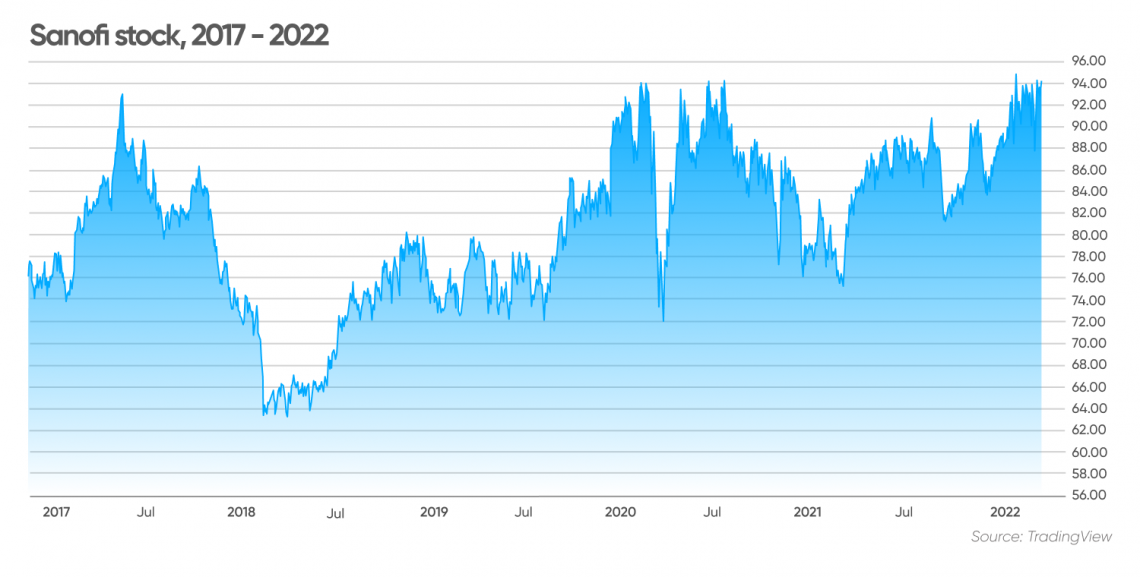 Note that analysts’ predictions can be wrong. FRA40 forecast shouldn’t be used as a substitute for your own research. Always conduct your own due diligence before investing. And never invest or trade money you cannot afford to lose. Past performance is no guarantee of future success.

German business sentiment clouds over but no sign of recession - Ifo

Capital.com CAC 40 forecast: What will 2022 hold for French stocks?