But is the pound faring worse now?

By Neil Dennis and Piero Cingari

Friday, 16 September, 2022 marks the 30th anniversary of the sterling crisis, known more dramatically as Black Wednesday, that forced the government to withdraw the pound from the European Exchange Rate Mechanism (ERM) as the UK currency plummeted on foreign exchanges.

The pound's sell off against the dollar (GBP/USD) this year has been intense and it now trades well below the lows seen in the aftermath of Black Wednesday, and is currently at its lowest point since 1985.

Both the 1992 crisis and the current sterling slump share some similarities, marked by speculative selling following cyclical highs, and exacerbated by inflation-driven recession fears.

But the 30 years between the two crises for the pound have brought some deep changes: both in the financial markets upon which currencies trade and the monetary mechanisms that influence them.

It's important to understand that in the early 1990s, the pound was not entirely free-floating. As part of the Exchange Rate Mechanism to help create European currency unity, it had been pegged to the German deutschmark (DM) since Britain joined the ERM in 1990.

But inflation in the UK, at nearly 11%, was around three times that of Germany's, and Britain was creeping towards recession. The pound began to lose ground against the DM and the government, with interest rates already at 15%, were reluctant to raise further.

Instead, the Treasury used the Bank of England to tap its currency reserves to buy pounds to help raise the currency's value and maintain is DM peg. Enter George Soros and the short trade.

On 15 September 1992, with the pound already losing heavy ground and increasingly desperate efforts to prop it up, Soros began to aggressively short the currency. The trade gained momentum, and each time the pound was supported a little higher by UK government buying, Soros and other short sellers redoubled their efforts and increased their profits.

On 16 September – Black Wednesday – the pound fell 4.2%, and with all government efforts to keep it aligned with the ERM in tatters, it was declared that the pound would leave the mechanism.

The economic policies that brought the pound into the ERM and subsequently saw it ejected were seen as a political disaster, and the Conservative Party that had governed the UK since 1979 lost at the 1997 general election, despite an economic revival in the mid-1990s.

The new Labour government gave the Bank of England an independent mandate and the pound was left to float freely.

The main change, he says is that "thinking about FX in official circles has evolved".

"The G7 have gone through the Great Financial Crisis and the Pandemic without intervention. It is less about the exchange rate and more about the access. Hence, the Fed swap lines."

He sums up the difference between 1992 and 2022: "With no dam to break, there are nearly constant incremental changes. With the ERM, it was like a step function – stasis and then break."

And this has much to do with the size and liquidity of the foreign exchange market now, compared to 1992: in '92 daily FX market turnover was around $500bn, now, it's closer to $7trn.

But is the pound faring worse now?

The following charts will help explain the current GBP crisis – similar in some ways to 1992 – but broadly speaking, a brand-new variety of currency crisis.

Piero Cingari, Capital.com’s chief FX analyst, says: “The British pound is approaching the thirtieth anniversary of Black Wednesday in very bad shape, reflecting the sharp inflationary crisis that is raging in the British economy and the negative macro outlook that sees a recession looming.”

Indeed, Cingari notes, this is the fourth-worst year for the pound, which has fallen 15% year-to-date, since 1992: 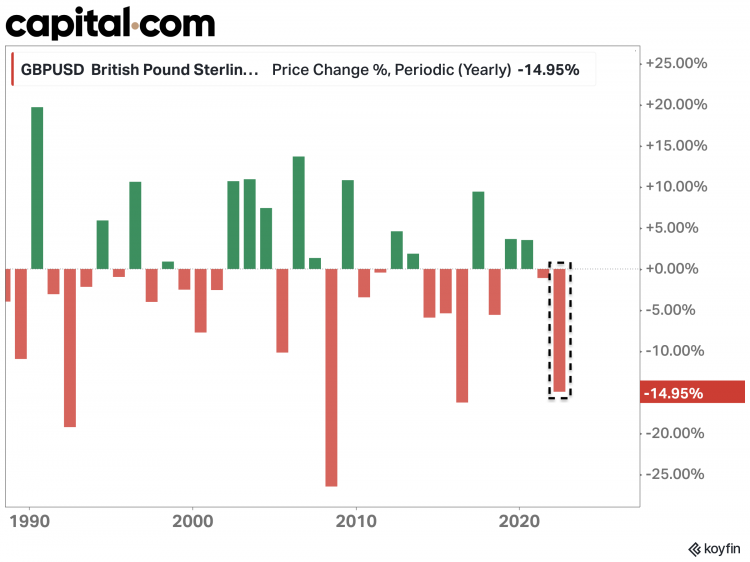 Rather like 1992, the pound is falling against a backdrop of high inflation and low, or no, growth. Data this week showed UK headline inflation in August – despite a small dip from the previous month as fuel prices fell – remained close to double figures at 9.9%. Core inflation – stripping out food and energy prices – remained at 6.3% for a second month. 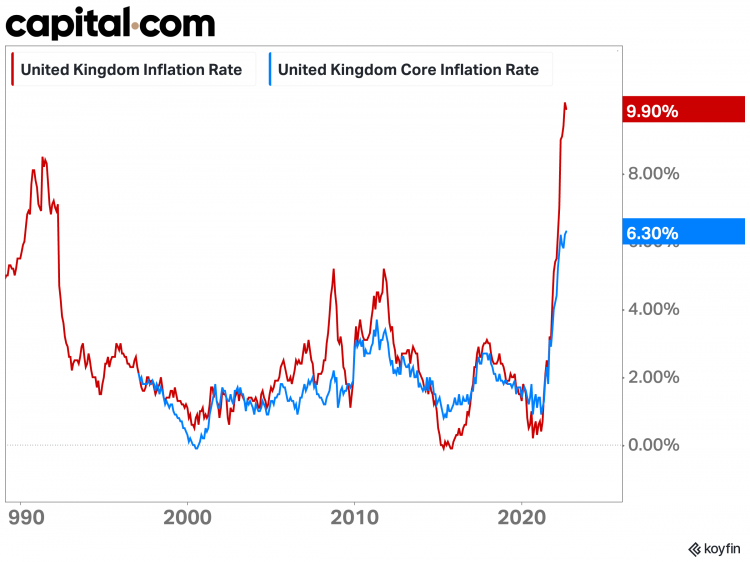 The two kingpins of UK economic activity, service sector output and consumer spending have also taken a hit in recent months, with purchasing manage index surveys showing both service and manufacturing sector activity is either contracting, or very close to it. Consumer confidence is at its lowest ebb since GfK started producing the data. 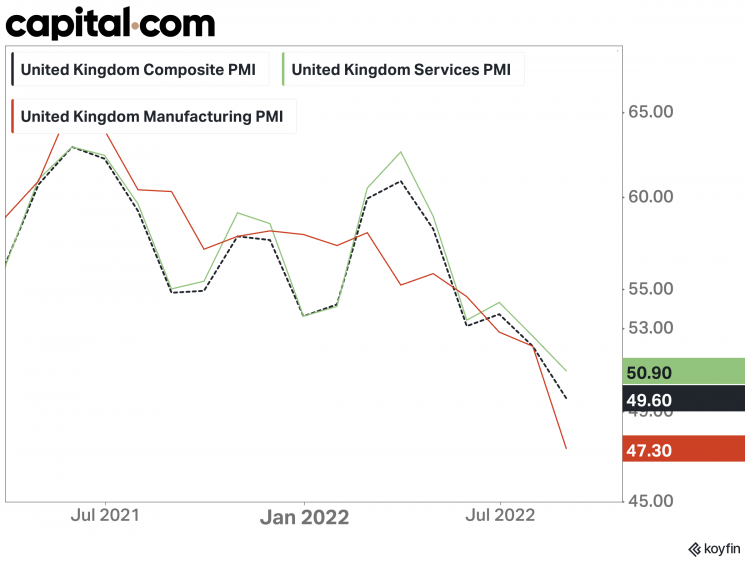 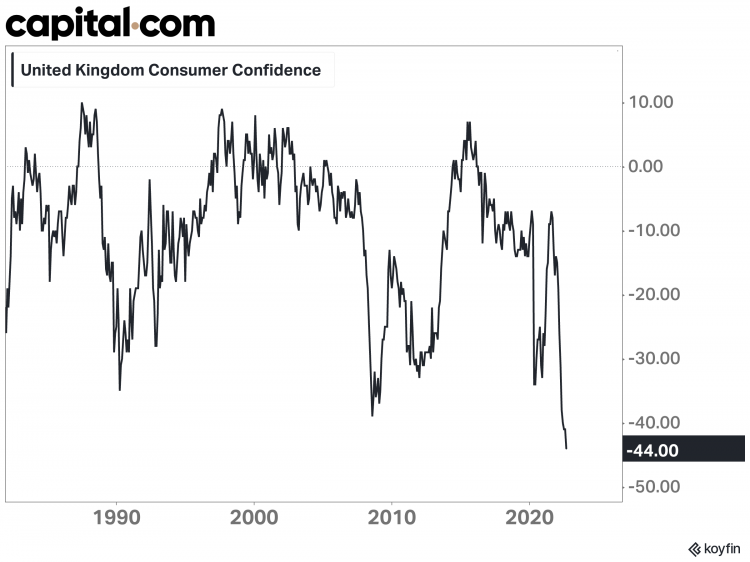 Thus, the pound is at risk, despite the Bank of England’s dual mandate to protect price stability and financial stability. The Bank can’t introduce stimulus to prop up the economy and the pound.

“On the contrary,” says Cingari, “it must continue to raise interest rates and shrink its balance sheet, to avoid inflation from spiralling out of control and triggering a loss of confidence in the currency.”

At its August meeting the Bank’s Monetary Policy Committee (MPC) raised the main bank rate by 0.5% to 1.75%, and with inflation still nowhere close to where the MPC sees its peak – above 13% – more rate hikes seem highly likely. Indeed, the MPC is expected to raise by at least another 0.5% at next week’s meeting.

Here’s what it’s done in the past two decades: 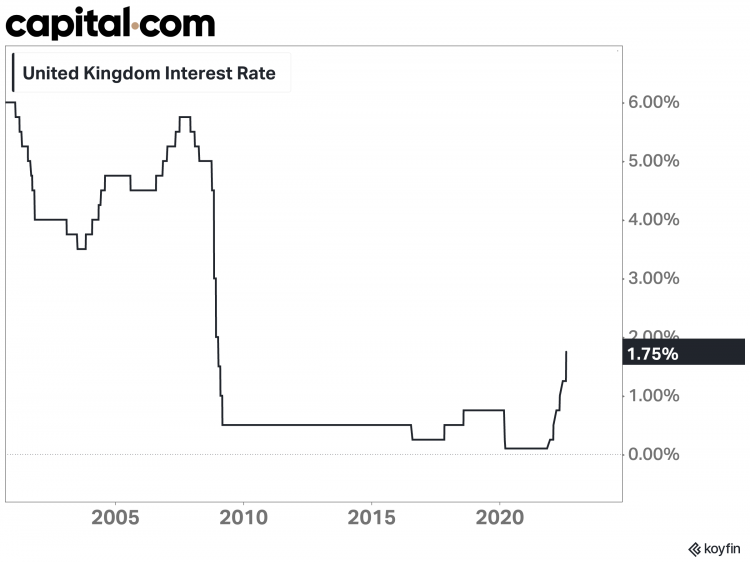 Meanwhile, UK gilt yields have begun to reflect the rising path in interest rates and the risks associated with a longer-lasting period of elevated inflation. The steep rise in UK 10-year gilt yields above the 3% mark seems to be reversing a secular downward trend in rates that has brought macroeconomic stability and prosperity to the UK.

With public debt at 95% of GDP (at an all-time high) and increases in interest rates and debt financing costs, the room for manoeuvre to undertake extravagant fiscal policies based on broad-based subsidies seems somewhat small. 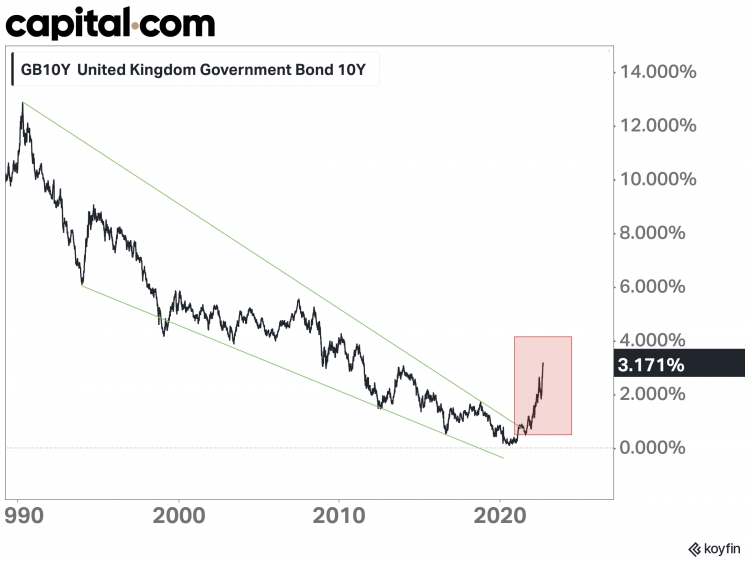