The auditor of the cryptocurrency exchange Binance, Mazars has withdrawn from “proof of reserves” work with crypto companies in the wake of the collapse of the FTX exchange.

Binance, the world’s largest crypto exchange, saw $6bn of withdrawals in the three days from 12 to 14 December. A spokesperson for the company said Binance had managed the withdrawals “without breaking stride”.

Mazars said it had paused all proof-of-reserves work with cryptocurrency clients, including Binance, because of concerns about “the way these reports are understood by the public.”

In November Binance, announced “BUSD Auto-Conversion”. As a result, the platform is able to convert user balances and new deposits of USD coin (USDC), pax dollar (USDP) and true USD (TUSD) into its own stablecoin, binance USD (BUSD). The exchange says that this will help improve liquidity and capital efficiency, as well as providing benefits to users.

Both Binance and WazirX have announced plans to prioritise BUSD over other stablecoins.

So what does this mean for the future of BUSD?

The price of the BUSB stablecoin saw increased volatility in the second and third quarters of 2022. The increased volatility could be partly attributed to instability and illiquidity in the current bear market, with BUSD trading between $0.9989 and $1.00 in a recent 24-hour window, according to data sourced from CoinGecko.

However, BUSD’s market cap has been increasing rapidly since January 2021, when it stood at just under $1bn. At the time of writing, on 16 December 2022, the token's market capitalisation stands at almost $19bn, and it is the third-largest stablecoin, according to CoinMarketCap. The other two major stablecoins are tether (USDT) and USD coin (USDC).

The data may be called into question after Mazars conducting a proof-of-reserves assessment of Binance earlier this month, which potentially finds its bitcoin reserves overcollateralized.

What is binance USD?

Binance USD is a stablecoin that is pegged to the US dollar (USD), a fiat currency. The value of the US dollar acts as a benchmark for the BUSD. The key feature of the coin is that one BUSD is intended to be equivalent to $1.

BUSD was founded by the blockchain infrastructure platform Paxos and cryptocurrency exchange Binance in 2019. BUSD is designed to minimise the risk of volatility experienced by most cryptocurrencies.

Binance says: “Due to the nature of cryptocurrency, crypto holders may experience volatile changes in their portfolio value. Using a stablecoin such as BUSD can help significantly to hedge against periods of market volatility.”

Unlike fully decentralised cryptocurrencies, BUSD is regulated by the New York State Department of Financial Services (NYDFS), according to Binance.

As part of the compliance and to support the value of the BUSD, Paxos holds an equal amount of US dollars to the total supply of the token. For example, for every 1,000 BUSD created, Paxos will need to hold $1,000 in reserve for the cryptocurrency. The withdrawal of 1,000 BUSD will lead to a burning of the tokens accordingly.

Binance says: “BUSD provides a monthly audited report of reserves in compliance with stringent regulatory standards to ensure the security and safety of user assets.”

According to Binance and CoinMarketCap, BUSD can be traded on over 30 exchanges. “BUSD also offers flexibility in allowing crypto users to quickly turn their holdings into a stable asset without moving off the blockchain,” added Binance.

Paxos issues BUSD (ERC-20) on the Ethereum blockchain while Binance creates BUSD (BEP-20) by holding BUSD in an Ethereum blockchain address and minting peg BUSD tokens. The asset holders can swap their tokens between Binance Smart Chain (BSC) and Ethereum.

Since BUSD launched in 2019, more applications and projects have adopted the use of the cryptocurrency. Binance claimed in April 2021 that there are more than 400 decentralised applications (dApps) that support BUSD.

CoinMarketCap says wallets such as Metamask, Trust Wallet, Trezor, Zapper, and many more allow users to hold BUSD. Platforms and services like travel booking site Travala, payments gateways such as Moonpay and Banxa, payment APIs including Wyre, and multi-currency payment services such as ivendPay and Paylot all support BUSD.

At the time of writing on 16 December 2022, there were just over 18.65 billion BUSD tokens in circulation.

What is your sentiment on BUSD/USD?

Binance USD was 0.11% lower as of the previous 24 hours of trading at 17:00 hours UST. The price movement coincided with the volume being below its average level and the token's market capitalisation risen. The market capitalization for the token now sits at $20,.54bn, while BUSB worth just over $8.4bn had been exchanged over the previous 24 hours. The price movement relative to the changes in volume and market cap recently gives BUSD a low-risk assessment.

The cryptocurrency research and data site Is This Coin A Scam gave binance USD has a safety score of 58% and was awarded a “good” rating, data retrieved on 16 December 2022 showed. The site said tbe BUSD token “is suited to an adventurous investment style”.

However, a report by Ethscan found 85% of the total supply of BUSD is held in just five addresses. Reporting on the BUSD auto-conversion plans, Bloomberg journalist Emily Nicolle said:

“Binance’s auto-conversion of USDC isn’t unprecedented, but it might be anti-competitive. The probability that traders will bother to convert away from BUSD is low when it’s all worth $1 anyway – but without any regulators, who’s left to object?”

The past few months have seen several stablecoins become unstable amid high market volatility and the larger market’s bearish patterns. BUSD has, however, maintained its $1 peg, despite market pressure.

However, the risk of a backlash from market participants remains high as commentators consider a monopolisation and ultimately centralisation of stablecoins. 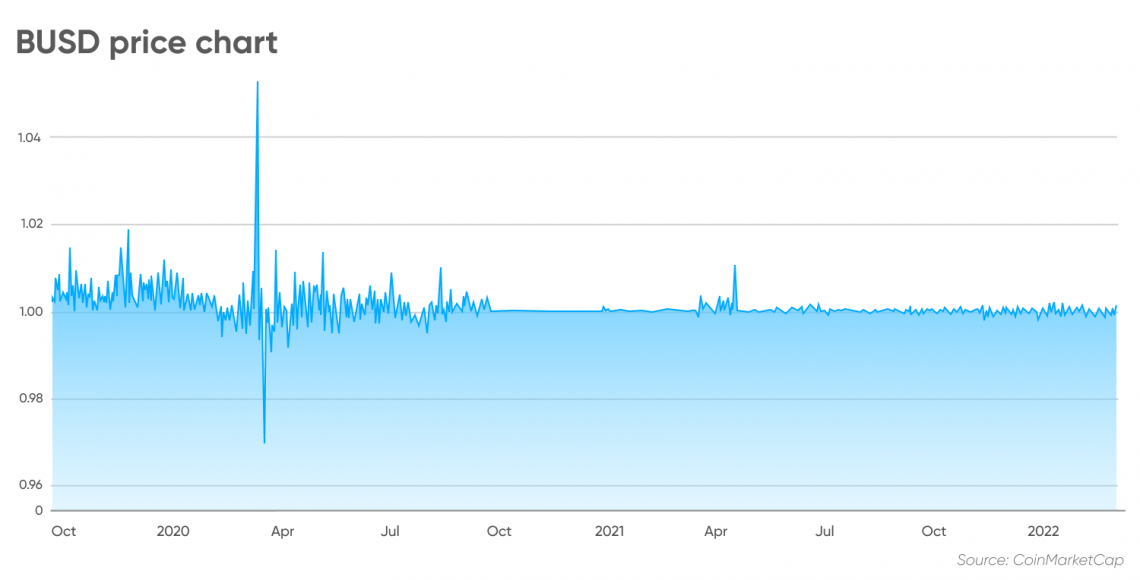 At the time of writing, DigitalCoinPrice gave an upbeat/stable Binance USD price prediction for 2023 and beyond, expecting the BUSD/USD rate to continue trading around the $1 mark.

Gov Capital held an “optimistic” BUSD prediction. The site’s BUSD forecast predicted the average price could be at $1.66 one year from now, rising to $5.63 by 2027.

However, it is important to note that any instability in the value of a stablecoin may be detrimental, as this type of cryptocurreny is not meant to fluctuate. Although stability may be expected by some members of the cryptocurrency community, the market is unregulated and the asset is unsecured. As demonstrated by the terraUSD fiasco back in May, investors may lose funds.

While looking for binance USD crypto price predictions, traders should remember that the markets are volatile. Forecasts are based on inferences drawn from past performance by analysts and may go wrong, due to market gyrations, change in policies, and other unknown parameters.

Investors should also consider the token’s collaborations, partnership deals, and fundamentals before relying on predictions.

Always conduct your own research and base your decision to buy cryptocurrencies on your attitude to risk and how comfortable you are about losing money. You should never invest money that you cannot afford to lose.

Sushi price prediction: What is SUSHI?

BTC/USD 23363.65
Trade
-0.700%
XRP/USD 0.41153
Trade
-0.350%
ETH/USD 1655.10
Trade
+0.520%
DOGE/USD 0.0921435
Trade
+0.970%
LUNC/USD 0.00020036
Trade
+14.820%
The difference between trading assets and CFDs
The main difference between CFD trading and trading assets, such as commodities and stocks, is that you don’t own the underlying asset when you trade on a CFD.
You can still benefit if the market moves in your favour, or make a loss if it moves against you. However, with traditional trading you enter a contract to exchange the legal ownership of the individual shares or the commodities for money, and you own this until you sell it again.
CFDs are leveraged products, which means that you only need to deposit a percentage of the full value of the CFD trade in order to open a position. But with traditional trading, you buy the assets for the full amount. In the UK, there is no stamp duty on CFD trading, but there is when you buy stocks, for example.
CFDs attract overnight costs to hold the trades (unless you use 1-1 leverage), which makes them more suited to short-term trading opportunities. Stocks and commodities are more normally bought and held for longer. You might also pay a broker commission or fees when buying and selling assets direct and you’d need somewhere to store them safely.
Capital Com is an execution-only service provider. The material provided on this website is for information purposes only and should not be understood as an investment advice. Any opinion that may be provided on this page does not constitute a recommendation by Capital Com or its agents. We do not make any representations or warranty on the accuracy or completeness of the information that is provided on this page. If you rely on the information on this page then you do so entirely on your own risk.