The world economy is recovering as many countries accelerate their vaccine roll-out. This is evidenced by the strong manufacturing and services PMIs from key countries such as the US, UK, China and Australia. Other numbers, such as industrial production, retail sales and inflation, have also been relatively positive.

As a result, analysts and traders have started to position for high interest rates and tapering of asset purchases. This can be seen in the recent price action in the bond market, where key government bonds are trading at their highest levels in more than 12 months. For example, recently, the 10-year yield on US Government bonds rose to almost 1.6 per cent.

A surge in government bonds has led to a rush from risky assets, such as technology stocks and cryptocurrencies, as well as emerging market (EM) currencies including the South African rand and the Mexican peso. With that in mind, let’s look at some of the best currency pairs to trade in March.

The Turkish lira has been under pressure lately. The currency has dropped by more than 8 per cent since February 16 in part because of the weakness of EM currencies.

However, there are several reasons why the USD/TRY is an ideal currency pair to trade in March. First, the bond market remains volatile as the US Senate continues its debate on the $1.9trn stimulus. If it passes, it could lead to further weakness in the Turkish lira as investors price-in higher inflation and ultimate Fed tightening in the US.

Second, there is uncertainty about the next action by the Turkish Central Bank. It has left its interest rates unchanged for two consecutive months. As such, analysts will be watching for the outcome of the bank’s meeting that is scheduled for March 19.

This is important because the latest data revealed that the country’s inflation is rising. The headline consumer inflation rose by 15.61 per cent in February from the previous month’s 14.97 per cent. Similarly, the producer price index rose from 26.16 per cent to 27.06 per cent in February. As oil prices keep rising, this trend could continue. A hawkish CBRT will probably offer some support for the lira.

Third, there is also a possibility that the Biden administration will impose new sanctions on Turkey for buying military weapons from Russia. The key USD/TRY levels to watch in March are 6.8825 (February low) and 7.7370 (50 per cent Fibonacci retracement). 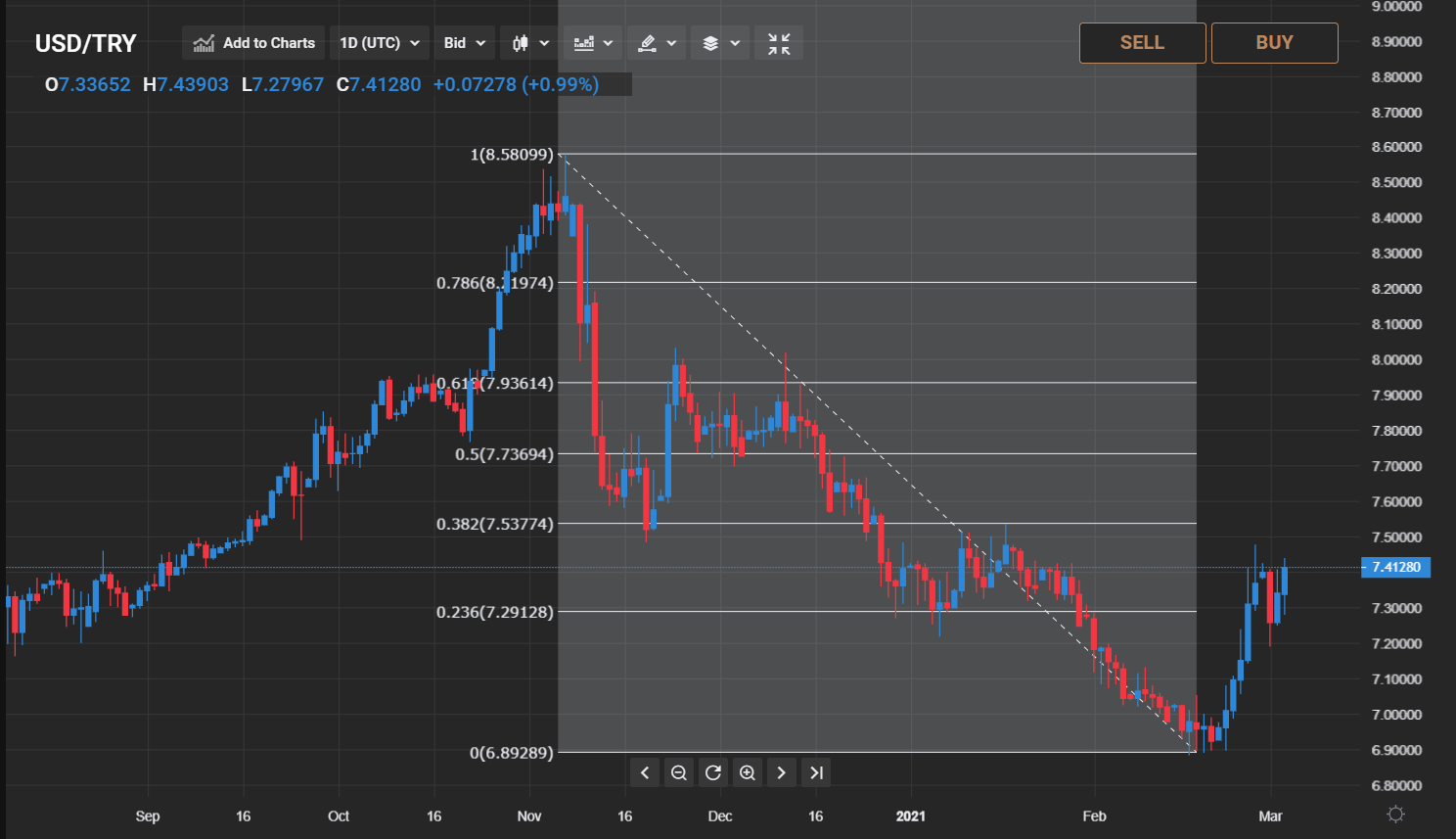 The Mexican peso can also be considered the best currency to trade right now. The USD/MXN has bounced back by almost 7 per cent from its lowest level in January this year. As with the Turkish lira, this price action is mostly because of the overall sell-off of EM currencies.

In addition to this sell-off, the Mexican peso will be important in March for three primary reasons. First, the country’s inflation has been rising. According to the statistics agency, the headline consumer inflation rose by 3.54 per cent in February. This trend could continue in March and put more pressure on the central bank to act.

Second, Mexico is the biggest trading partner of the US. In 2019, the two countries did trade worth more than $614bn. Therefore, another stimulus in the US will be a positive outcome for Mexico. It will mean more purchases of Mexican-made goods and higher remittances from the US. Finally, as a key oil-exporting country, Mexico will benefit from rising oil prices.

Still, the USD/MXN rate could continue rising in March because of the inverted head-and-shoulders pattern on the daily chart. The most likely scenario is for the pair to rise to 21.50, while the alternative is for it to decline to 20.00. 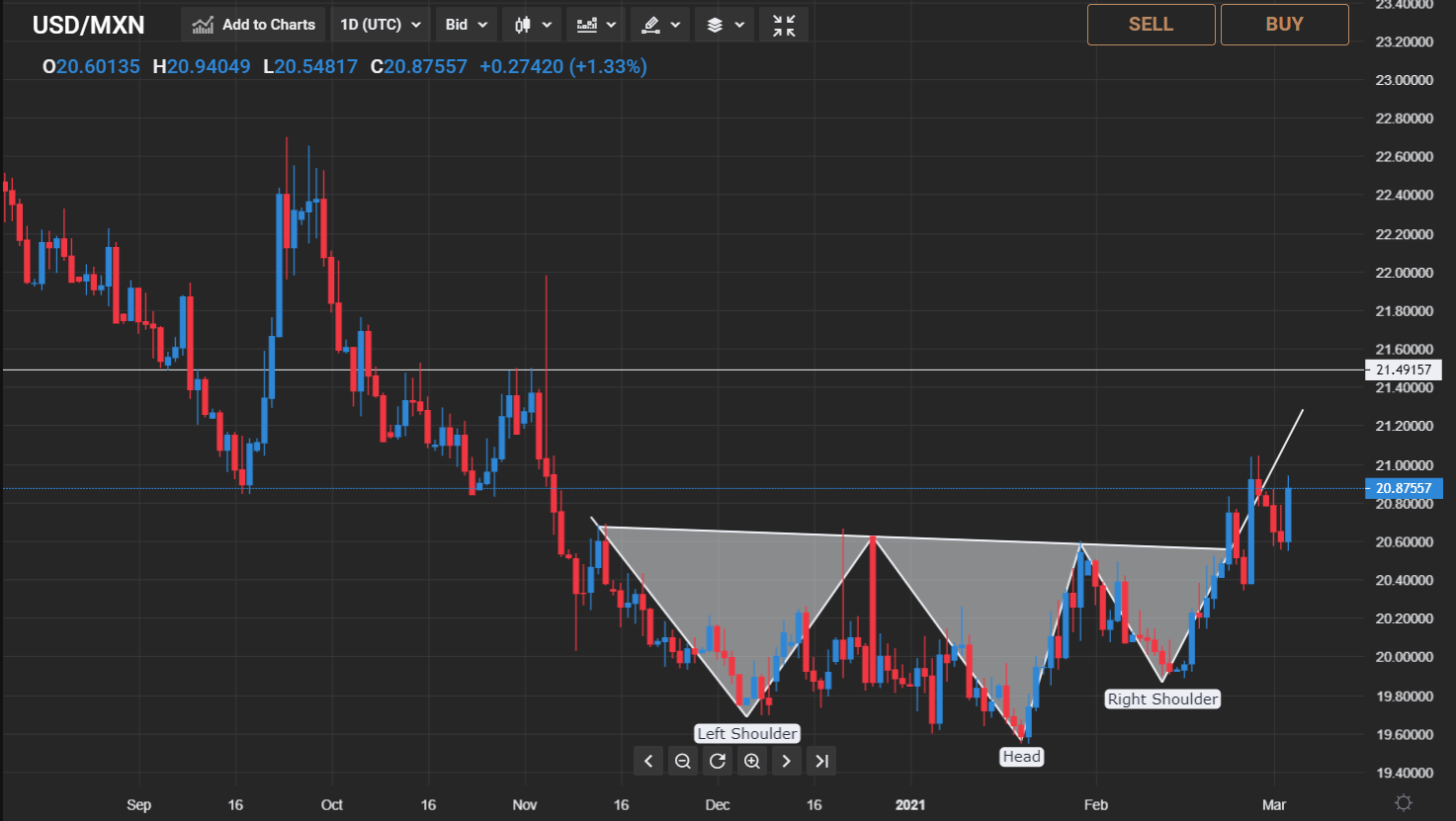 The South African rand had a strong 2020. It rose by more than 20 per cent against the US dollar between April and December. This price action was because of the risk-on sentiment that pushed the greenback lower against most currencies.

This year, however, the USD/ZAR pair has wavered. It first surged by 8 per cent to 15.6710 and then dropped to 14.400. In March, it rose again because of the overall risk-off sentiment in the market.

The USD/ZAR will be in focus in March because of the upcoming South African Reserve Bank (SARB) decision to leave interest rates unchanged and keep supporting the economy. However, it has also hinted that it will hike rates later this year. In the upcoming decision, the bank will need to contend with a slowing economy and higher inflation rate. 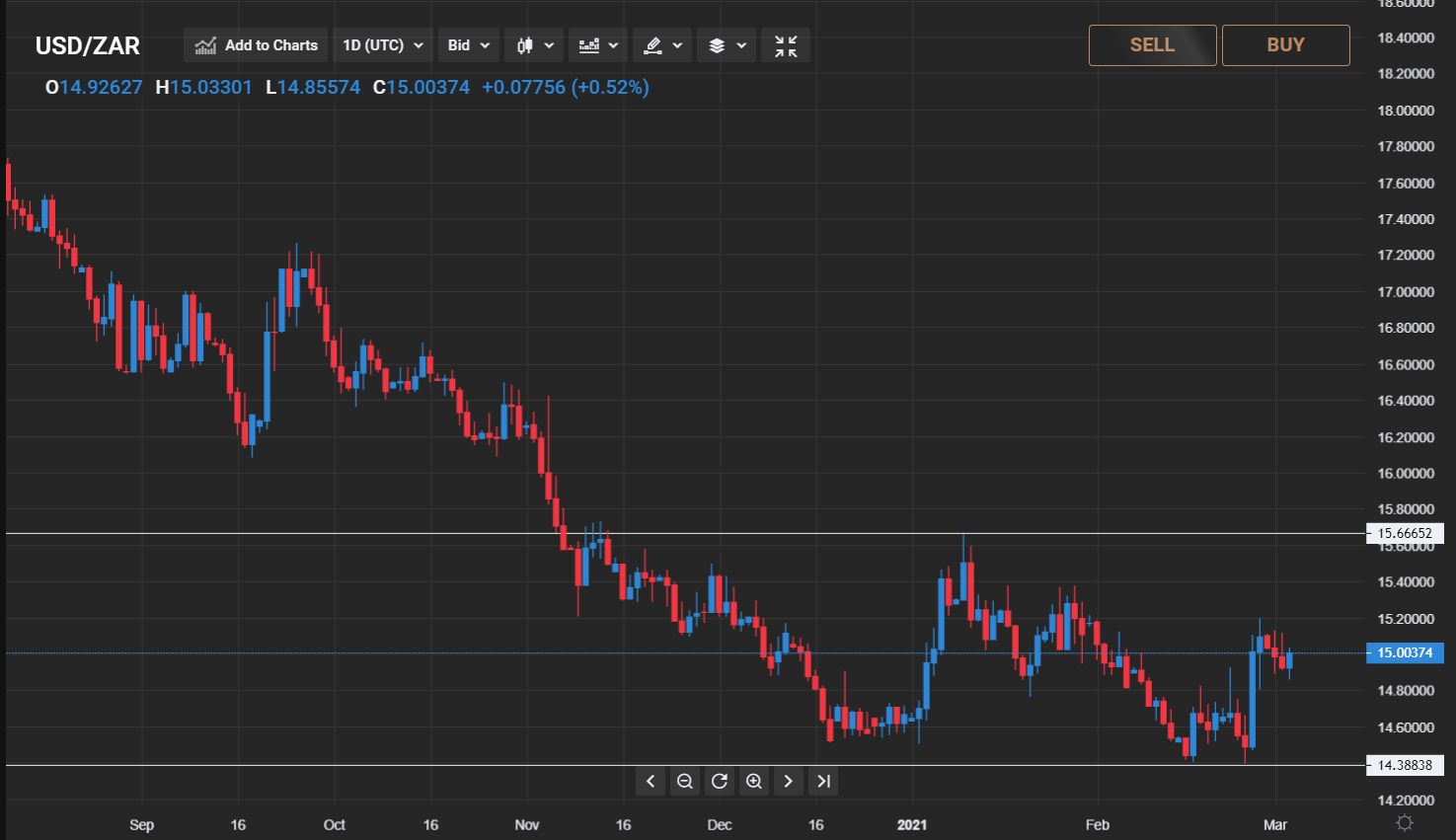 The Norwegian krone has been one of the best-performing major economy currencies. It has risen by 30 per cent from its lowest level in 2020. It is also hovering near its highest level since April 2019.

The krone has benefited from Norway’s large sovereign wealth fund that has enabled the government to respond to the crisis without extreme borrowing. The ongoing surge in oil prices has also helped the country since it is a net exporter.

Most importantly, Norges Bank has signalled its willingness to hike interest rates earlier than expected. There is a likelihood that this rate hike will come earlier since the economy is recovering faster than expected. Also, the price will react to the volatility of crude oil prices. The key USD/NOK levels to watch will be 8.7298 and 8.3150. 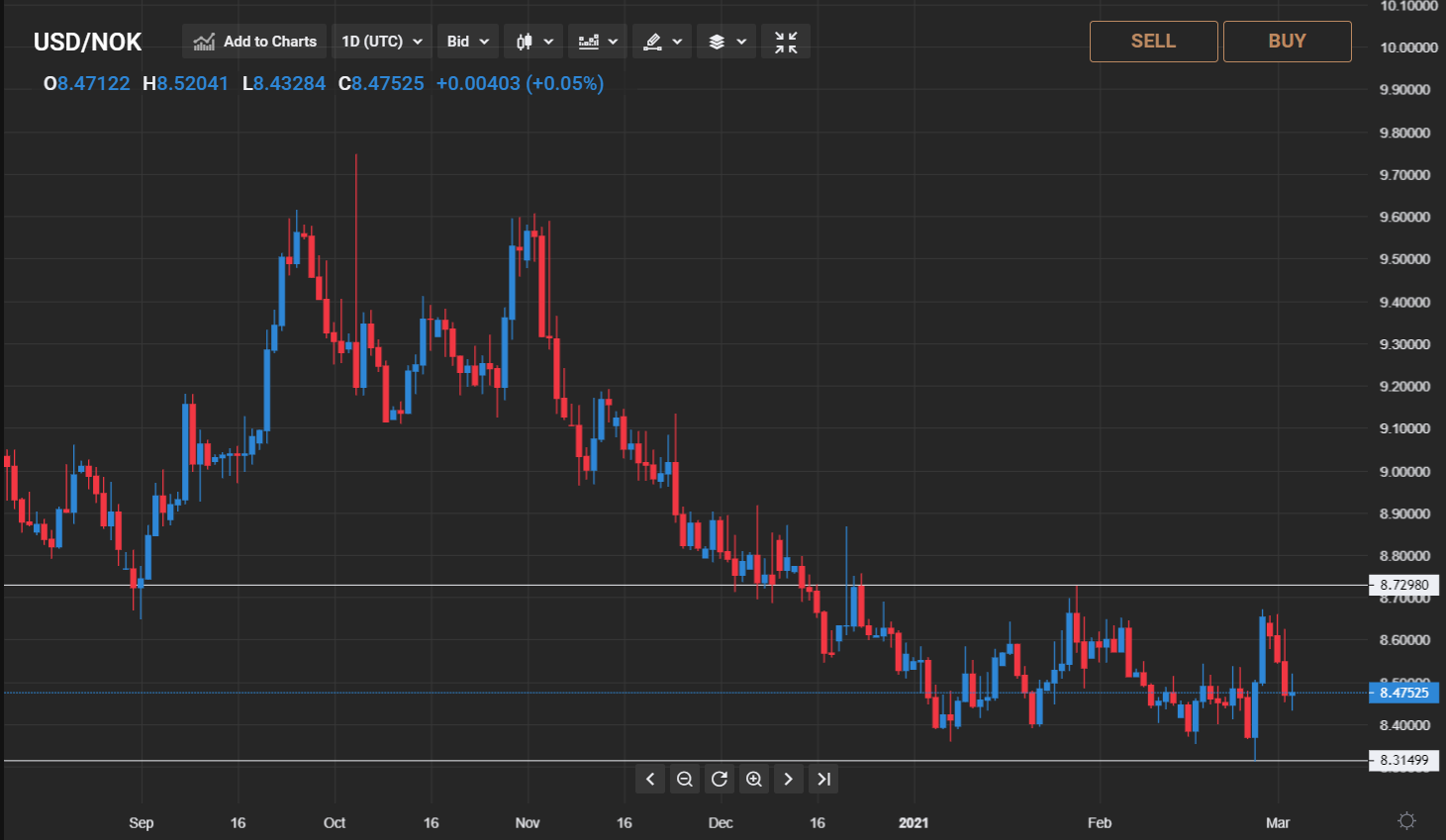 While not as exotic as the previous pairings, the GBP/USD is another pair of the best currencies to trade this month. The pair has risen for the past six consecutive weeks, making sterling the best-performing currency in the G7. This trend is mostly because of the recently passed Brexit deal and the ongoing vaccination drive.

After avoiding a no-deal Brexit scenario in December, many investors rushed to the then “undervalued” pound. Meanwhile, the UK was the first country to start a large-scale vaccination drive. It has already vaccinated more than 15 million people and is on track to fully reopen in the second quarter.

At the same time, the Bank of England has almost ruled out taking interest rates to the negative zone. In March, the GBP/USD will be in the spotlight as traders watch the performance of Gilts and the outcome of the BOE meeting on March 18. Also, they will watch the Brexit negotiations on financial services whose deadline is on March 31. The key GBP/USD levels to watch will be the year-to-date high of 1.4248 and 1.3565 (February low). 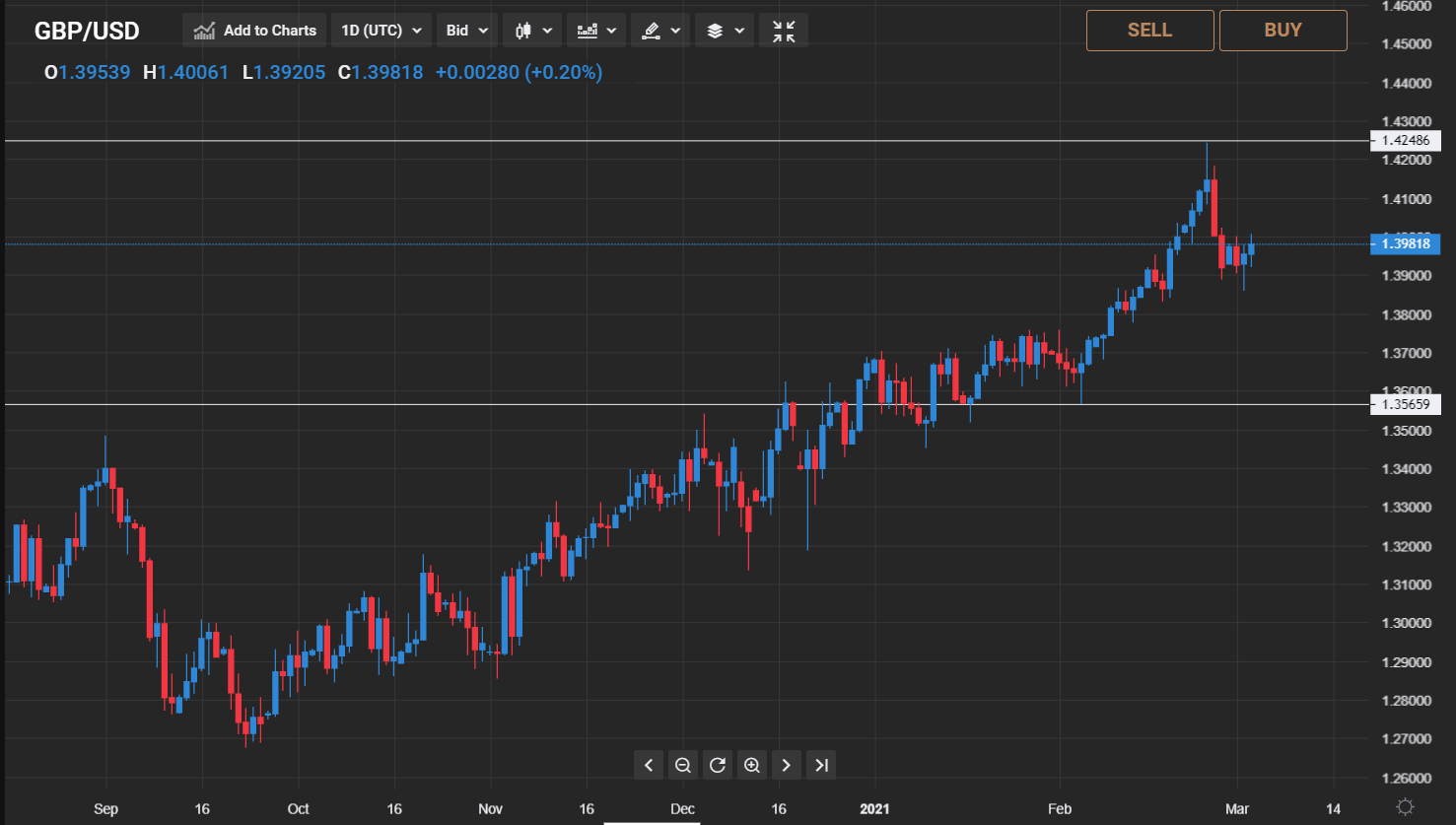 In this article, we have looked at some of the top currency pairs to trade in March 2021. In general, we expect high volatility in key emerging market currencies such as the South African rand, Turkish lira and Mexican peso because of the risk-off sentiment. Also, currencies such as the Norwegian krone and Australian dollar will be important because of the volatility in the commodities market.

Read more: The 2021 UK Budget round-up: where next for the economy and markets?