The meme stock craze is back this month and US-based household goods furniture retailer Bed, Bath & Beyond (BBBY) is the latest stock to benefit, soaring by 300% since 1 August.

So-called meme stocks have attracted the attention of retail investors looking to make large profits from stocks that have the potential to rally sharply. This is often prompted by investment funds that, having shorted the stocks, are forced to buy shares to cover their positions when prices rise. This is known as a short squeeze.

Investors on social media apps and discussion forums such as Wall Street Bets on Reddit focus on a group of meme stocks with a view to collectively pushing up prices through their purchases of shares and options.

Meme stocks lost steam when the stock markets turned bearish this year, particularly high-growth stocks. But with the markets gaining upward momentum since June, investors have returned to back popular stocks.

What do you need to know about Bed, Bath & Beyond? Why has BBBY stock become a focus for investors? And where do analysts see the share price moving after such a strong, fast rally?

In this article, we take a look at the company and the potential share price outlook from analysts.

Bed Bath & Beyond was founded in 1971 by co-chairmen Warren Eisenberg and Leonard Feinstein in New Jersey, US. They left their roles as executives at a discount chain store to found their own specialty retailer. As the company expanded, it added housewares and home décor products.

Bed, Bath & Beyond went public in 1992 on the Nasdaq Stock Exchange, where it still trades. The company had its first year of $1bn in annual sales in 1999. The company’s major competitors include retail giants, like Walmart (WMT) and Target (TGT), as well as home goods retailers, like Crate & Barrel, IKEA and Pottery Barn.

In recent years, activist investors have forced changes to Bed, Bath & Beyond’s management. In 2019, Eisenberg and Feinstein retired from the board of directors “in response to shareholder feedback and in connection with its commitment to accelerating refreshment at the Board-level,” the company said, and CEO Steven Temares resigned. Mary Winston, one of the company’s board members, was appointed interim CEO until Mark Tritton took the job later in the year.

Bed, Bath & Beyond reported a net loss for the first quarter of $358m, or $4.49 a share, worse than the $1.28 a share loss analysts had forecast, citing inflationary pressures and ongoing supply-chain problems. Cash on the company’s balance sheet fell 90% from a year earlier to just $107.5m.

Tritton was ousted as CEO in June this year, with independent board member Sue Gove appointed as interim CEO. “We must deliver improved results. Our shareholders, Associates, customers, and partners all expect more, “ Gove said. “We are committed to providing customers with a one-stop destination to meet their needs through our assortment, experience, and services, whether online or in stores.”

Back in March this year, activist investor Ryan Cohen, former CEO of Chewy and the current chairman of Gamestop, another meme stock, sent an open letter filed with the Securities and Exchange Commission (SEC) to the board calling for the company to sell or spin out its buybuy Baby subsidiary.

Bed Bath & Beyond responded by entering a cooperation agreement with Cohen, giving his RC Ventures three board seats and forming a Strategy Committee “focused on exploring alternatives to unlock greater value from the company's buybuy BABY banner.”

Investor Jake Freeman’s holding company, FCM BBBY Holdings, which bought a 6.21% stake in Bed Bath & Beyond on 20 July, filed an open letter requesting the board to consider a proposal to reduce the company’s debt and increase liquidity.

“BBBY is facing an existential crisis for its survival. To effectuate its survival, BBBY needs to cut its cash-burn rate, drastically improve its capital structure, and raise cash. Currently, the US options market is pricing in high implied volatility, for BBBY derivatives which can be leveraged and capitalized on in order to effect a realignment of BBBY’s debt. Freeman Capital’s plan for the realignment of BBBY consists of two crucial legs: cutting debt and raising capital,” the letter said.

But on 16 August, an SEC filing showed that FCM BBBY Holdings had sold all of its stake. On 17 August, RC Ventures, which holds an 11.8% stake, indicated in a filing its intention to sell its shares and call options.

What impact have these developments had on the share price and the Bed, Bath & Beyond stock forecast?

What is your sentiment on BBBY?

Give BBBY a try

The BBBY stock price has been volatile since 2020 as the stock staged a recovery from the March lows. The share price climbed from a low of $3.94 a share in early April 2020, reaching $24.84 in mid-October 2020 as the home goods company benefited from online retail sales to consumers making home improvements during Covid-19 lockdowns.

The share price began to slip back in November 2020 after Covid-19 vaccines were announced. The stock ended the year at $17.76 a share. 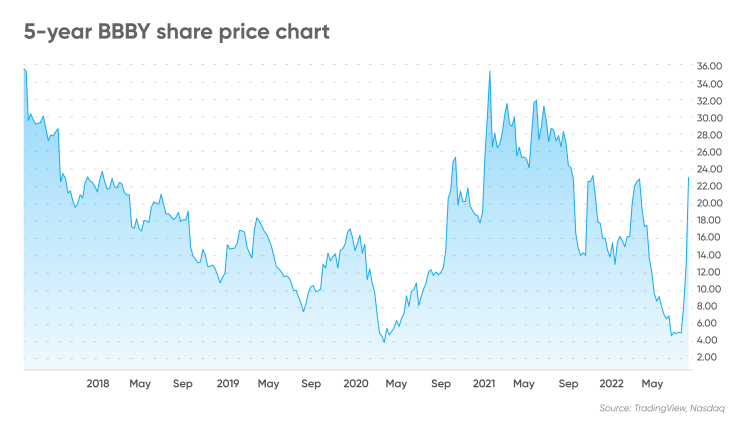 The share price rallied to $53.90 on 27 January 2021 as interest in meme stocks surged. The price fell in May, but hit  $44.51 in June as the company announced new brands as part of its turnaround strategy. However, the gains were not sustained and the price declined, falling below $14 in October.

BBBY’s stock spiked to $23.25 in November and then fell in line with the broader financial markets heading into 2022. The price soared from $16 a share in early March to $27.23 in response to the company’s agreement with Cohen.

What’s next for the volatile stock? Is now the time to buy or go short? What do the latest Bed, Bath & Beyond stock predictions indicate?

Bed, Bath & Beyond stock forecast: Is the rally overdone?

The average 12-month price target from 13 analysts that have issued a Bed, Bath & Beyond stock forecast is $6.50 per share, according to MarketBeat, indicating a downside of more than 71% from the close on 17 August. Forecasts ranged from a low of $2 per share to a high of $23, reflecting the stock’s volatility. There were 11 sell ratings and 2 hold recommendations, with none of the analysts rating the stock a buy.

On 9 August, analysts at Robert Baird downgraded the stock from neutral to underperform, with a BBBY stock forecast of $4.

Algorithm-based forecaster Wallet Investor predicted at the time of writing (18 August) that the BBBY share price could fall and stabilise over the coming years. The site’s Bed, Bath & Beyond stock forecast for 2022 saw the price ending the year at $13.74 and then trading around $14.604 at the end of 2023. By the end of 2025, the stock could trade at $18.45.

When looking at any Bed, Bath & Beyond stock forecast, it’s important to keep in mind that the extreme volatility of meme stocks makes it difficult to make accurate predictions. As such, analysts and algorithm-based forecasters can and do get their predictions wrong.

We recommend that you always do your own research. Look at the latest market trends, news, technical and fundamental analysis, and expert opinion before making any investment decision. Keep in mind that past performance is no guarantee of future returns. nd enver invest money that you cannot afford to lose.

Capital.com Bed, Bath & Beyond Stock Forecast | Is BBBY a Good Stock to Buy?