AUD/USD forecast: Will China’s economic recovery lift the Australian dollar out of its slump?

The Australian dollar (AUD) recouped some of its losses against the US dollar, as indications that US Federal Reserve could slow the pace of its interest rate hikes softened the US dollar.

The AUD appreciation came as the Reserve Bank of Australia (RBA), the country’s central bank, also slowed the pace of its interest rate hikes despite soaring inflation.

The Fed’s recent dovish tone and RBA’s softening monetary policy were fresh headwinds for the AUD/USD, which has already been under pressure from China’s slowing economic growth. Chinese demand for Australia’s key commodities has been softening as Covid-19 restrictions put a brake on the country’s economic growth.

However, recent reports that China will end its two-year ban on Australian coal supported the currency. Will China’s economic recovery help the currency maintain its upward trend?

The Australian dollar (AUD) is one of the world’s major currencies. According to the Bank for International Settlement, Australia’s official currency – which is often known by its ‘Aussie’ nickname – is the world’s fifth most-traded currency, accounting for 6.8% of daily trades.

For example, if the AUD/USD exchange rate is 0.69, this means that $0.69 (or 69 US cents) can be exchanged for a payment of AUD1 (or $1 Australian). When the value of the Australian dollar rises in comparison to another currency, it ‘appreciates’. It ‘depreciates’ when its worth declines.

Rising commodity prices may also entice exporters to invest in increasing output capacity. The investment is often funded by money moving into Australia from elsewhere, which boosts demand for Australian dollars.

AUD/USD plunged to the 0.58 level in March 2020, at the onset of the Covid-19 pandemic, as investors switched to safe-haven investments on concerns about the impact of the pandemic on the country’s commodity exports. An AUD/USD chart showed that the last time the pair traded at such a low level was in 2001-2002.

However, the Aussie managed to recover and proved resilient despite escalating trade tensions with China, which led to China banning Australian coal. The forex pair gained more than 9% in 2020.

Entering 2021, the AUD/USD started strong, briefly hitting an intraday high of 0.80 on 25 February 2021. But it gave up its gains since then and continued its descent for the rest of the year. The currency pair lost about 5.6% during 2021. 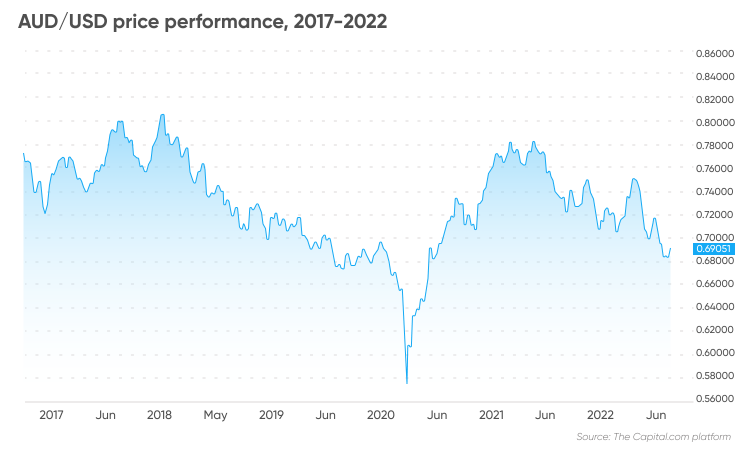 The AUD/USD experienced some volatile trading in 2022, but it was mostly pointing downward. The Australian dollar’s value versus the US dollar continued its downward trajectory into 2022, but its appreciation in the last two months of 2022 narrowed its losses.

The pair opened at the 0.71 level at the start of the year and continued its ascent, crossing 0.75 in April, boosted by rallying commodity prices. The war between Russia and Ukraine, and the ensuing sanctions on Russia’s energy and commodity exports, have raised concerns about supply.

The Aussie, however, gave up its gains against the US dollar following a slew of headwinds.

The Fed’s more hawkish monetary policy put downward pressure on the Aussie. Since March, the Fed has signalled aggressive rate hikes to tame soaring inflation, partly driven by rising domestic prices. However, the Fed has softened its tone in recent weeks, suggesting a slower pace of rate hikes. The Fed implemented seven rate hikes in 2022, lifting its benchmark funds rate target to 4.25%-4.50% in December 2022, and from 0.25% to 0.50% in March.

The price of spot iron ore, Australia’s top commodity export, has rallied in recent months to $115 per tonne as of 6 January. The steel-making ore has dropped about 29% from its highest 2022 price of $161.40 in early April, but it has risen 20.44% in the past three months, according to Market Index data.

Australia may see an upside from oil and natural gas prices, the country’s second- and third-largest exports, according to ING Group’s global head of markets and CEE Chris Turner and FX strategist Francesco Pesole.

Oil prices have retreated from above $100 per barrel in March, but remained elevated at $79/barrel. Natural gas prices, on the other hand, have been falling to the level before Russia invaded Ukraine as Europe has stocked up ample supplies, and as demand softened amid milder winter weather – except for December’s cold snap.

“Here, we see clearly more upside room for prices, especially on the natural gas side. On balance, we expect the commodity picture for Australia to be rather constructive next year, which could offer a buffer to the Australian economy during the downturn,” Turner and Pesole wrote on 16 November 2022.

Resumption of China’s imports of Australian coal may help to strengthen the Aussie.

On 4 January, Reuters reported that China’s state planner has allowed three central government-backed utilities and its top steelmaker to resume coal imports from Australia. It was the first move since China imposed an unofficial ban on coal trade with Australia in 2020.

“Among commodity currencies, there is scope for differentiation, with the AUD’s robust long-term structural drivers weighing against the higher carry returns of the NZD. We expect the AUD to be an outperformer in 2023,”ANZ Research noted in its outlook in December 2022.

Over 2022, the Australian currency faced pressure from China’s economy, which was dealing with a new surge of Covid-19 cases and imposing lockdowns.

China’s dismal economic growth has been partly self-inflicted, due to its reluctance to loosen its grip on the zero Covid-19 policy.

“When it comes to AUD, the China factor will remain very central, as Australia has the most China-dependent export machine in the G10. Our economics team’s baseline scenario is that the real estate crisis will be the main drag on growth in China and while retail should recover on looser Covid rules, slowing global demand should hit exports,” ING’s Turner and Pesole added.

However, the country’s economy was expected to rebound in 2023 after all Covid-19 restrictions were lifted, including the reopening of its border to international arrivals on 8 January 2023.

“China’s economy will likely bottom out in 2023, due to Covid reopening and property support policies. But external demand is likely to be falling,” ANZ Research analyst Raymond Yeung wrote on 16 December.

At home, the Aussie is facing headwinds from RBA’s monetary policy to contain inflation and fears of recession. On 6 December 2022, RBA hiked the cash rate target by 25 basis point (bps) to 3.10%. It was the eighth rate hike since the bank kicked off its tightening cycle in May.

“The Reserve Bank of Australia has been one of the ‘pioneers’ of the dovish pivot, and a return to 50bp increases seems unlikely, as the Bank is probably monitoring the rather overvalued housing market, and the inflation picture is less concerning than in the US or in Europe,” Turner and Pesole said.

“This would mean a less attractive carry – and less upside risk in an optimistic scenario for global sentiment; but also less damage to the economy, which may play in AUD’s favour in our baseline scenario,” Turner and Pesole said.

Consumer Price Index (CPI) inflation soared to an annual rate of 7.3% in the September quarter, the highest since 1990, according to the Australian Bureau of Statistics. The monthly CPI rose by 6.9% in the 12 months to October, the ABS announced on 30 November.

“While these numbers indicate that inflation is slowing, mainly because of easing supply side pressures, the Board will be cautious given that wage increases will be intensifying in the first half of 2023 and some components of inflation – particularly services – will remain a challenge while the need to anchor inflationary expectations in the face of such high inflation prints will be ongoing,” Westbank’s chief economist Bill Evans wrote on 19 December.

Let’s take a look at the latest Australian dollar to US dollar forecasts from analysts.

As of 6 January 2023, economic data provider Trading Economics, in its AUD/USD forecast, estimated the currency pair to trade at 0.67 by the end of the first quarter of 2023, falling to 0.63 in a year’s time.

Banks and financial institutions do not typically make AUD/USD predictions beyond 2024. However, algorithm-based forecasting services, such as Wallet Investor, can generate a five-year forecast for AUD/USD using the currency pair’s historical data.

Wallet Investor, in its Australian dollar to US dollar forecast, said the forex pair could be a “not so good long term (one year) investment”. At the time of writing on 6 January 2023, the forecasting service expected AUD/USD to trade at 0.685 by December 2023.

Note that analysts’ and algorithm-based AUD/USD forecasts can be wrong, and should not be used as a substitute for your own research. Always conduct your own due diligence before investing, and never trade money you cannot afford to lose.

EUR/USD 1.08356
Trade
-0.140%
USD/JPY 130.454
Trade
0.000%
GBP/USD 1.23242
Trade
-0.230%
AUD/USD 0.69978
Trade
-0.840%
GBP/JPY 160.772
Trade
-0.240%
The difference between trading assets and CFDs
The main difference between CFD trading and trading assets, such as commodities and stocks, is that you don’t own the underlying asset when you trade on a CFD.
You can still benefit if the market moves in your favour, or make a loss if it moves against you. However, with traditional trading you enter a contract to exchange the legal ownership of the individual shares or the commodities for money, and you own this until you sell it again.
CFDs are leveraged products, which means that you only need to deposit a percentage of the full value of the CFD trade in order to open a position. But with traditional trading, you buy the assets for the full amount. In the UK, there is no stamp duty on CFD trading, but there is when you buy stocks, for example.
CFDs attract overnight costs to hold the trades (unless you use 1-1 leverage), which makes them more suited to short-term trading opportunities. Stocks and commodities are more normally bought and held for longer. You might also pay a broker commission or fees when buying and selling assets direct and you’d need somewhere to store them safely.
Capital Com is an execution-only service provider. The material provided on this website is for information purposes only and should not be understood as an investment advice. Any opinion that may be provided on this page does not constitute a recommendation by Capital Com or its agents. We do not make any representations or warranty on the accuracy or completeness of the information that is provided on this page. If you rely on the information on this page then you do so entirely on your own risk.