The Australian dollar to Canadian dollar currency pair (AUD/CAD) has fallen over 7% from early April as commodity prices fall, China sticks to its strict zero-Covid policy and oil hits a 9-month low.

Read on for some of the latest AUD/CAD forecasts.

What is AUD/CAD, and what are its primary drivers?

The Australian dollar is the official currency of Australia and several other countries and territories, such as Christmas Island and the Coco Islands, among others. The Aussie came into circulation in 1966 and is issued by the Reserve Bank of Australia (RBA).

The Canadian dollar is Canada’s official currency. Introduced in 1858, it’s issued by the Bank of Canada (BoC). The CAD is the fifth most held reserve currency globally after the USD, EUR, GBP and JPY. It is the sixth most traded currency.

As a result, these currencies are influenced by price fluctuations in those commodities, hence the name commodity currencies.

What is your sentiment on AUD/CAD?

Give AUD/CAD a try 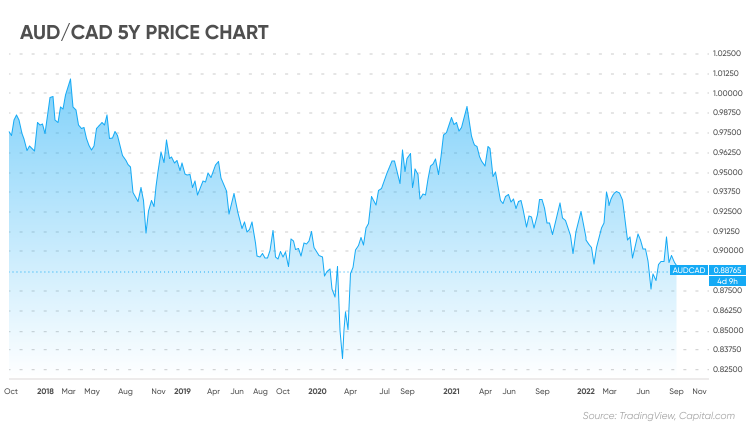 By early 2014 the pair had regained upwards momentum, rising to the 1.03 level.

The pair has been trending low over the past 18 months, falling to its current level of 0.89 as of 27 September.

The AUD/CAD started 2022 at around 0.92 before steadily falling across January to a 20-month low of 0.8910. From there, the pair rebounded, with the Australian dollar (the Aussie) strengthening against its Canadian peer (the loonie), rising to a yearly high of 0.9516.

From this 2022 high, the Aussie started weakening against the loonie, falling steadily across the second quarter of 2022 to a low of 0.8750, a level last seen when the Covid-19 pandemic hit in April 2020.

While the pair has recovered from this 2022 low, the AUD/CAD trades below 0.90, with further weakness threatening to push the pair to new 2022 lows.

Slowing growth cools the demand outlook for commodities, pulling prices down. This is particularly the case for China, the world’s largest consumer of metals and Australia’s lead trading partner. Growth in China has been a concern due to strict measures to control the spread of Covid-19. Lockdowns, travel restrictions and mass testing have taken their toll on the economy, resulting in growth faltering and the risk of a recession looming large.

The OECD, in their report released on 26 September 2022, noted that global economic growth is slowing more than was expected a few months ago amid fallout from Russia’s invasion of Ukraine, high energy prices and rising inflation.

Demand for input from China is one of the key factors influencing the prices of oil, metals and other commodities worldwide. Covid-zero policies and the housing market crisis have put China’s economic growth behind the rest of the Asia-Pacific region for the first time in more than 30 years, according to forecasts from the World Bank.

In a report released on Monday, the US-based institution said the annual growth outlook for East Asia and the Pacific region had been downgraded from 5% to 3.2%. The majority of that decline, however, was attributed to economic woes in China, which constitutes 86% of the region’s economic output. The World Bank’s report forecast China’s GDP to grow 2.8% for 2022, and the rest of the 23-country region to grow 5.3% on average – more than double the 2.6% rise in 2021.

Sticking with commodities, the loonie is also affected by oil prices, which have fallen over 35% since June, trading at the lowest level for nine months. As with metals, the demand outlook for oil is cooling as recession fears rise.

Meanwhile, economic growth in Australia has held up at around 3.5% in 2022. However, the RBA has also raised interest rates aggressively to control inflation, which is expected to start denting demand from households and businesses going forwards.

The RBA has increased rates by 225 basis points. RBA Governor Philip Lowe considers that the central bank could soon be approaching the end of big hikes.

Canada’s economy is growing at an annual rate of 2.9% in Q2. Analysts at the National Bank of Canada put this down to Canadian producers still selling at historically high price levels, despite the recent slowdown in commodity prices.

The high prices are boosting Canada’s current account balance, which recorded a surplus in Q2 for the first time in 14 years. The impact of EU sanctions on oil prices could further support the sector.

While the Aussie has been weakening across the past six months, is this trend likely to continue? Let’s see what the analysts think.

In their AUD/CAD forecast, analysts at the National Bank of Canada (NBC) said that the Australian dollar will appreciate against the Canadian dollar in the coming quarters.

As of 27 September, analysts at data aggregator TradingEconomics considered that the Aussie could weaken against the loonie by the end of the quarter, with the pair predicted to fall to 0.8792. Its AUD/CAD forecast predicted the pair could continue to drop in 2023, falling to 0.8621 over the coming 12 months.

Algorithm-based forecaster WalletInvestor was more upbeat about the prospects for the Australian dollar, expecting it to strengthen in the near term. The service’s AUD/CAD forecast had the pair ending 2022 at 0.8950. However, its AUD/CAD forecast for 2025 saw the Aussie holding steady against the loonie and the pair staying at 0.89 by the end of the year.

It is important to remember that analysts’ and algorithm-based Australian dollar to Canadian dollar forecasts can be wrong. Always conduct your due diligence before trading, looking at the latest news, technical and fundamental analysis, and analyst commentary.

Past performance does not guarantee future returns. And never trade money that you cannot afford to lose.