AMD stock forecast: Can the tech giant reverse the downtrend?

The stock price of US tech firm Advanced Micro Devices (AMD) has been in the slump for more than seven months.

Despite solid operational and financial performance in the second quarter, AMD stock has lost 32% of its value year-to-date (YTD). Weakening global sales of personal computers (PC) due persisted supply chain problems and inflationary pressures have raised concerns over semiconductor demand.

Will these issues continue to cap AMD stock price, or will the stock reverse its downtrend? In this article, we look into AMD's historical price, its latest earnings and news that could help to form a plausible AMD stock forecast.

Advanced Micro Devices (AMD) is a global technology company based in the United States that produces a wide range of processors, graphics, video and multimedia products.

Based in Santa Clara, California, AMD is a global leader in the microprocessor industry. The company’s products include accelerated processing units (APU), graphics processing units (GPUs) and System-on-Chip (SoC). It also produces server processors and technology for game consoles.

AMD invests in high-performance GPUs and software for markets such as gaming, artificial intelligence, cloud gaming, and virtual and augmented reality.

Three years after its establishment, the company issued 620,000 shares of common stock for over-the-counter (OTC) trading at $15.50 a share on 27 September 1972. It raised a total of $7.5m from the public offering. In October 1979, AMD debuted on the New York Stock Exchange (NYSE). However, it transferred its stock to the NASDAQ Stock Exchange on 2 January 2015.

AMD initially concentrated on producing logic chips. The Am2501 logic counter, the company's first proprietary product, was released in 1970 and was a huge success. To attract more customers, AMD started to broaden its products to include high-performance memories and networking.

The company expanded its business as its customer base increased, opening an assembly plant in Malaysia and increasing the size of its headquarters in Sunnyvale. In just five years after its establishment, AMD was manufacturing more than 200 products – many of them proprietary and had close to $25.5m in annual sales, according to Silicon Valley Historical Association.

What is your sentiment on AMD?

Give AMD a try

AMD has also delivered trailing returns of 37.98% over the last 10 years, outperforming the industry's 20.38%, based on Morningstar’s data, as of 3 August.

Buoyed by the semiconductor demand boom during the Covid-19 pandemic, the company’s share value nearly doubled in 2020 and gained 56.9% in 2021. 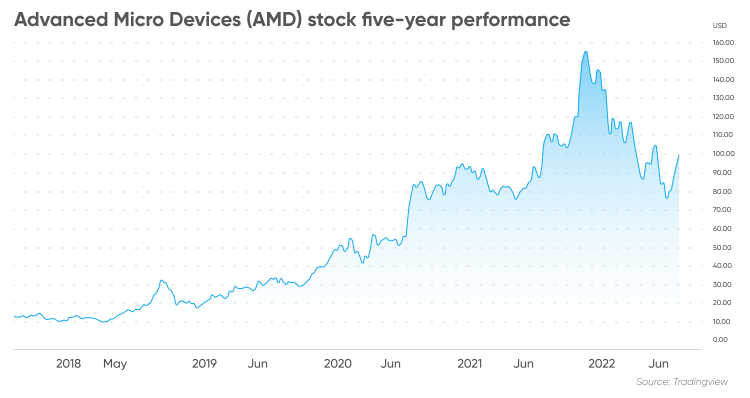 In 2022, the trend reversed and the AMD stock price headed downward.

Monetary tightening in the US and elsewhere has raised concerns about recession, which could hurt demand for consumer electronics, including PC, laptops and games. In addition, the slump in crypto markets has heightened worries about demand for GPU used in crypto mining.

Reported adjusted earnings per share of $1.05 beat analysts’ estimates of $0.90, as tracked by MarketBeat.

The company generated a record $1.04bn cash from operations in the second quarter, compared to $952m a year ago.

For the third quarter of 2022, AMD expects revenue to be $6.7bn, plus or minus $200m. It represents a 55% increase YoY led by growth in the Data Center and Embedded segments.

Slowing PC sales globally, is one of its main concerns, including AMD.

According to Gartner, global PC shipments in the second quarter of 2022 fell 12.6% YoY to 72 million units, the sharpest decline for the global PC market in nine years. The company reported that sales dropped in all regional markets amid geopolitical, economic and supply chain challenges.

“The decline we saw in the first quarter of 2022 has accelerated in the second quarter, driven by the ongoing geopolitical instability caused by the Russian Invasion of Ukraine, inflationary pressure on spending and a steep downturn in demand for Chromebooks,” said Mikako Kitagawa, Gartner’s research director, in a statement on 11 July.

PC delivery had suffered delays due to logistics disruptions with buyers experiencing longer lead times, although it has begun to improve partly due to reopening key cities in China from fresh Covid-19 lockdowns by end of the second quarter, Kitagawa said.

“To maintain profits as inflation increases costs, the PC industry is having to raise average selling prices (ASPs) despite weakening demand,” Kitagawa added.

“Taking a step back, while there has been additional softness in the PC market in recent months, we believe we are very well positioned to navigate through the current environment based on the strength of our existing product portfolio and upcoming product launches,” said Su in the company’s earnings call with analysts on 2 August.

“We are being more conservative in our PC outlook. Our PC outlook now at mid-teens would kind of put the market at somewhere around, let's call it, 290 million to 300 million units. So I do think we've appropriately de-risked the PC business,” she added.

Jefferies rated AMD stock a ‘buy’ with a price target of $147.

They also viewed AMD growing the performance of its desktop segment with Zen, in the server market with EPYC products and in the professional graphic business with Navi.

As of 3 August, the consensus view of 28 analysts tracked by MarketBeat rated the stock a ‘moderate buy’. In all, 20 analysts rated it a ‘buy’ and seven a ‘hold’. One analyst rated AMD a ‘strong buy’.

Using historical prices to generate an Advanced Micro Devices stock forecast for 2022, Wallet Investor suggested that the stock could reach $111.71 by the end of the year. The algorithm-based forecasting service rated the stock a “good long-term (one year) investment”.

The Advanced Micro Devices stock forecast for 2025 from Wallet Investor suggested the stock could almost double to $202.194 by the end of the year. Its AMD stock forecast saw the price hit $242.809 in July 2027.

Note that Advanced Micro Devices stock predictions based on analyst and algorithmic forecasts can be inaccurate. You shouldn't rely on forecasts in place of your own research. Always do your own due diligence to assess the potential of a stock. Keep in mind that your choice to trade or invest should be based on your risk tolerance, market knowledge, portfolio size and objectives.