The word recession is now frequently uttered by economists and analysts, and the value of equities has plummeted in 2022, with the S&P 500 (US500) and Dow Jones Industrial Average (US30) recording 18.1% and 13% losses, respectively, as of 24 May.

Stocks like Affirm (AFRM) that are particularly sensitive to changes in macroeconomic conditions have suffered.

That said, the market’s AFRM earnings expectations were recently exceeded. The company reported lower-than-expected net losses and surpassed analysts’ revenue estimates during the third quarter of the 2022 fiscal year.

Since the report came out on 12 May, the stock has surged nearly 70%. This calls for a revision of the Affirm stock potential. In this article, we will assess the latest Affirm stock news along with its price action and fundamentals to outline plausible scenarios for the future.

Despite the rally in the past two weeks, Affirm stock has shed more than 75% of its value since 2022 started.

Moreover, the Affirm stock value of $24.52 has been standing 86% below its 52-week high of $176.65 and 70% below its 200-day simple moving average of $81.55 (as of 24 May). This emphasises the strength of the negative momentum that AFRM has been experiencing as the macroeconomic environment deteriorates.

The most recent price action has formed a pattern known as a falling wedge, which is typically considered a bullish formation that can lead to a trend reversal if its upper bound is eventually broken. 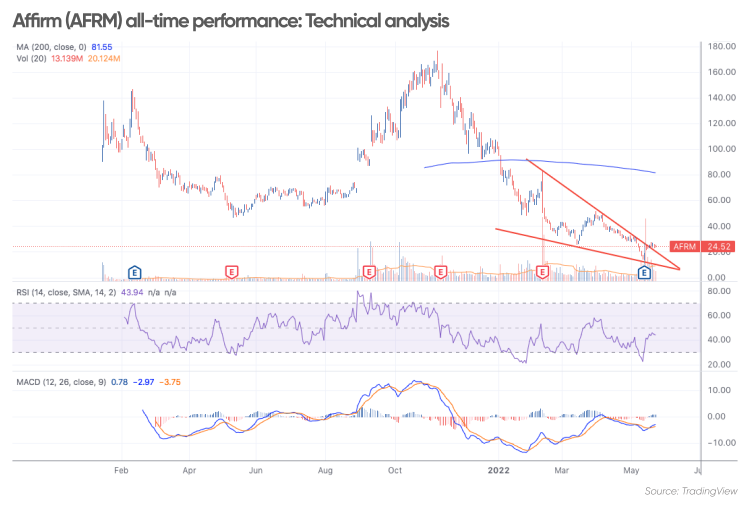 The chart above indicates that this break has already occurred following the post-earnings uptick. This could favour a short-term bullish Affirm stock outlook as trading volumes remain relatively high compared to historical levels.

However, momentum indicators are not confirming this view. The Relative Strength Index (RSI) has been sitting at 43.94 (still bearish), while the moving average convergence divergence (MACD) has remained in negative territory even though it crossed above the signal line.

From the technical perspective, a retest of the $33 resistance seems possible, and would result in a 33% upside potential in the short term. That said, the likelihood that Affirm will manage to fully turn around its price trend to the point that it can reach its November 2021 highs or even the stock’s 200-day SMA remains relatively low as macroeconomic conditions continue to favour a mid-term bearish outlook for risky assets such as equities.

On 12 May, Affirm reported its financial results covering the third quarter of the 2022 fiscal year.

Net revenues for the three months ended on 31 March landed at $354.8m, resulting in a 54.9% jump compared to the previous year as gross merchandise volumes (GMV) experienced a significant jump. However, at 9.1% revenues as a percentage of GMV experienced a 110 basis point decline compared to a year ago.

Affirm’s active consumers climbed to 12.7 million compared to 5.4 million in the third quarter of the 2021 fiscal year. The number of active merchants experienced a significant surge, moving from 11,500 to 207,000 in just a year. 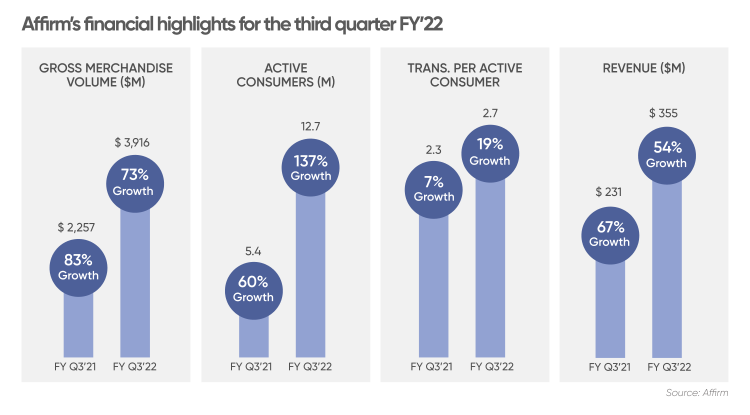 By the end of this quarter, Affirm had $2.26bn in cash and equivalents, $2.5bn in loans held for investment, and $1.7bn in outstanding convertible notes.

The company does not pay a dividend, and the Board hasn’t approved any Affirm stock dividends lately.

What is your sentiment on AFRM?

Give AFRM a try

Commenting on the Affirm Holdings stock forecast, David Jones, Capital.com’s Chief Market Strategist, suggested that traders and investors should proceed with caution, considering AFRM as a potential asset to trade.

“Any long-term holders in Affirm may be regretting their decision to stick with the stock as it is currently trading around 85% lower than its November 2021 high. It is only in the middle of May that it set a fresh all time low and, whilst it is tempting to try and pick the bottom in a major slide, history would suggest for Affirm that it may still be too soon to start looking for a major low,” said Jones.
“Given that sentiment towards stocks - and in particular the technology sector - is still uncertain at best, the risk for now is that any strength could be short lived as investors take advantage of a slight bounce to get out at a better price. The risk for now is that the stock could remain under pressure and may well revisit that $15 low.”

According to data compiled by MarketBeat (as of 24 May), the consensus recommendation for Affirm stock was neutral. Six of 16 analysts rated the stock a ‘hold’, two gave it a ‘sell’ recommendation and eight a ‘buy’.

The average Affirm stock price target was $68.44, resulting in a 179.11% upside potential based on 23 May’s closing price of $24.52. The highest 12-month Affirm stock price prediction stood at $220 a share from Sumitomo Mitsui, while the lowest was $17 from Stephens.

Despite the company’s surprisingly good quarterly report, multiple analysts lowered their price targets for Affirm as macroeconomic conditions in the United States – the company’s most important market – deteriorate.

Referring to some of the management’s comments during the most recent earnings call, analyst Ramsey El-Assal from Barclays stated: “They cited having over $10.1 billion in funding capacity at the time of the call (May 12) and recently received an AAA-rating of some of the securitized debt.”

This assertion may have “put to bed some persistent bear themes” that pointed to upcoming challenges for the firm to raise the money it required to stay afloat as it continues to burn cash every quarter. 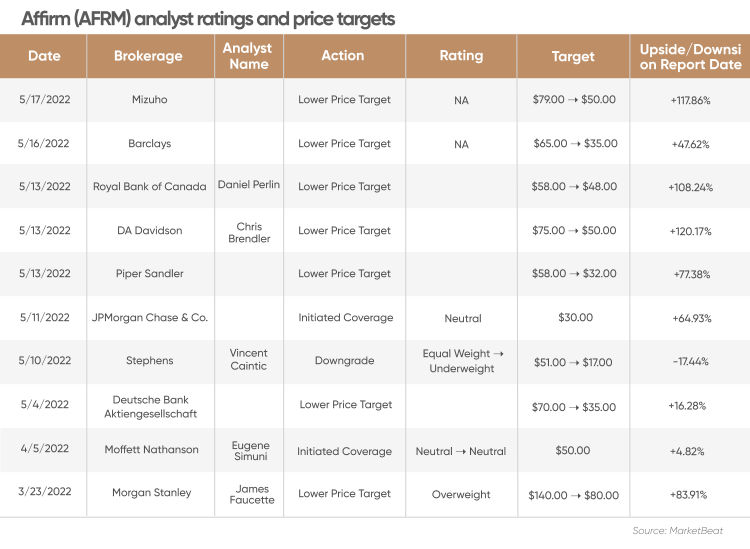 Wallet Investor’s short-term Affirm stock outlook was bearish, based on an analysis of multiple technical indicators. It expected the price to decline to $19.455 on 6 June and end 2022 at $8.341.

Looking forward, Wallet Investor estimated the Affirm stock market price could move further down to $0.000001 in August 2023 and stay at around zero by 2025. There were no forecasts available for 2030.

Gov Capital’s short-term forecast was bullish. The algorithm’s Affirm projected stock price for 1 June was an average of $32.130.

However, this service’s baseline Affirm stock forecast 2025 was no longer available - the forecasting service suggested that the stock price could fall to zero by January 2023.

None of the opinions or projections shared in this section should be considered a recommendation to trade Affirm stock. Algorithm-based predictions and analysts use AFRM stock price history to draft their forecasts. Past performance never guarantees future results.

It’s important to do your own research. Your decision to trade depends on your attitude to risk, your expertise in the market, the spread of your portfolio and how comfortable you feel about losing money. You should never trade more money than you can afford to lose.

Pfizer stock forecast: Is the stock set to rise?

Capital.com Affirm stock forecast: Will AFRM go up or down?