As 2021 draws to a close, it's perhaps the best time to review the events that shaped financial markets over the past year and look forward to 2022.

Just a year ago, risk assets were awash with investors’ optimism as news of the discovery of Covid-19 vaccinations boosted expectations of finally putting the pandemic behind us, with the S&P 500 index poised to start the new year with double-digit returns in the last quarter of 2020.

A year later, the stock market is heading in a similar fashion towards the New Year, yet Covid-19 infections have never been higher due to the new Omicron variant, while inflation, previously dismissed as a transitory phenomenon, has become more concerning and central banks, that have flooded financial markets with liquidity, now appear more hesitant to keep the taps open.

Let’s shed some light on the scene with the following 10 charts on what has happened over the last 12 months in the global economy and financial markets to comprehend what might await us in 2022.

1. Inflation hasn’t been this high in more than 30 years 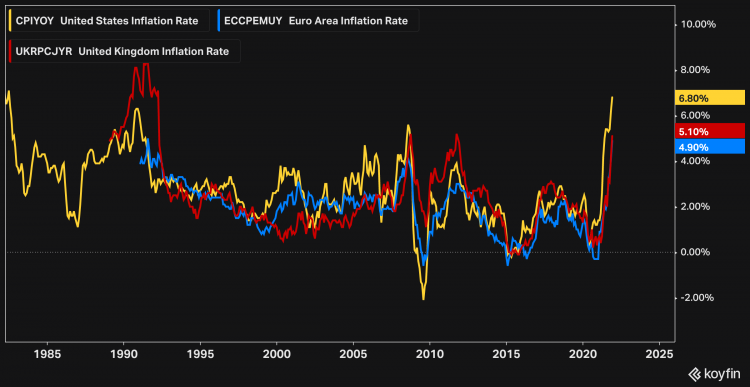 Inflation is skyrocketing to multi-decade highs in the advanced world. The US Consumer Price Index rose by 6.8% in November from a year earlier, the highest since June 1982. The inflation rate also topped 2011 highs in the UK and reached July 1991 highs in the Euro Area.

The reasons behind the rise in inflation include both demand-side factors, such as ultra-supportive financial conditions and increases in labour and capital income, as well as supply-side ones, such as the global supply-chain crisis and an increase in commodity prices, particularly oil and other energy goods. 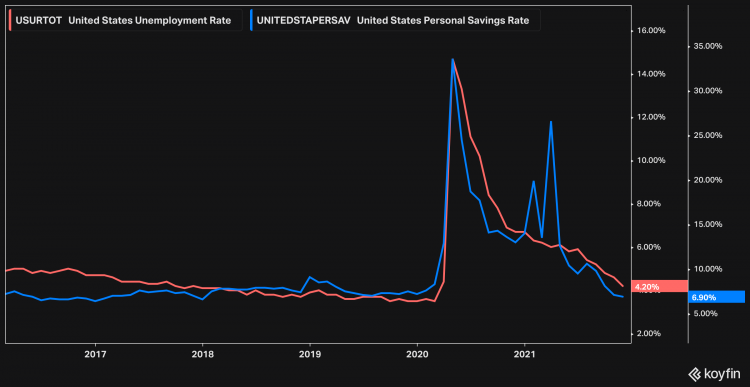 In 2021, a quick and sustained global economic recovery brought the unemployment rate close to pre-pandemic levels in key industrialised economies. As a result of the better job and economic picture, households have dropped their high levels of accumulated savings for safety reasons, allowing more spending to flow into the economy.

3. A liquidity deluge lifted risk assets: will that continue in 2022? 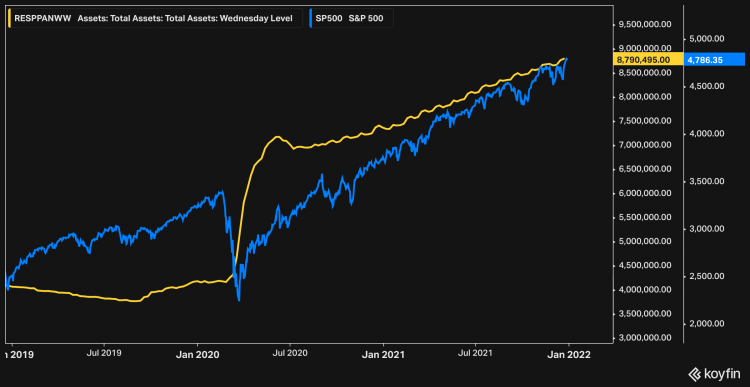 Since the epidemic began, the S&P 500 index has doubled in price, as have the Federal Reserve’s balance sheet assets, which now total $8.8trn (£6.5trn). In 2021, the Fed printed a net of $1.4trn to purchase US Treasuries and corporate bonds, contributing to maintain exceptionally low market interest rates and enticing investors to seek profits in riskier assets.

During its last meeting in December, the Federal Reserve announced that it would conclude its asset purchase program in March 2022, paving the way for a normalisation of interest rates in response to persistent inflationary pressures. 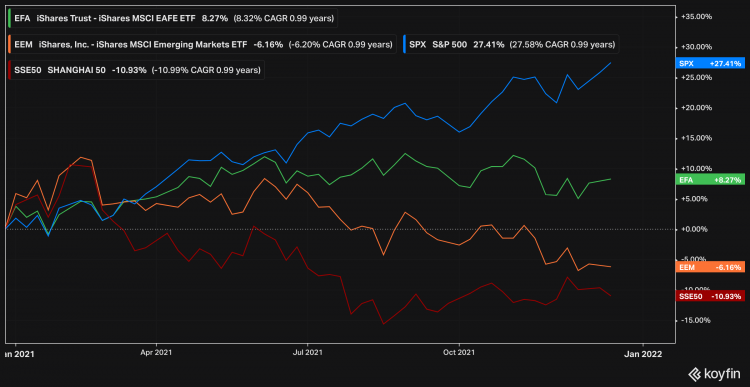 Stock market returns in developed economies substantially outpaced those in emerging markets, with the United States and China being the two extremes.

Rapid and effective vaccination efforts in the developed countries aided economic recovery from pandemic lows, but logistical challenges in vaccine delivery have kept immunisation rates in developing economies lower than in the advanced world.

A domestic property-developer debt crisis has pulled the China equity market down, with the giant Evergrande defaulting on $300bn in offshore loans. 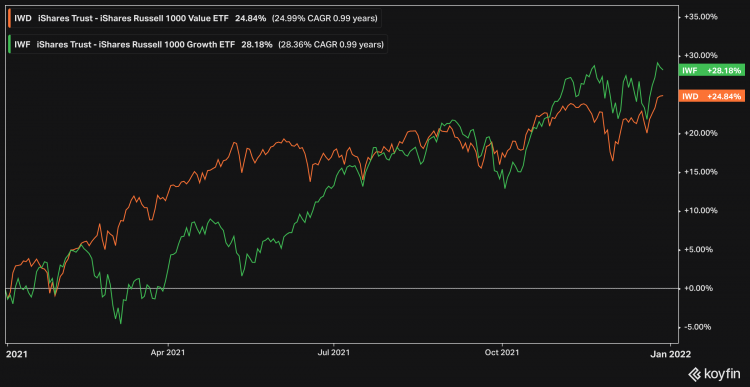 Again this year, growth equities outperformed value stocks by around 4%.

Over the last decade, a basket of growth stocks has generated a total return of almost 500%, compared to 230% for a value basket, as record-low interest rates and abundant liquidity benefited companies discounting high future growth rates. 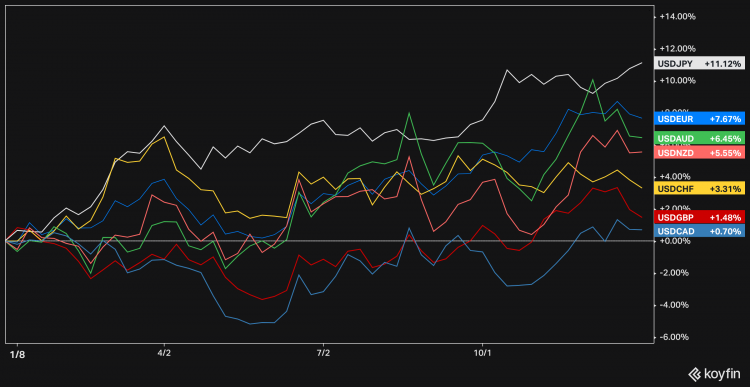 US dollar vs major currencies in 2021 – Credit: Koyfin

In 2021, the US dollar gained ground against all major currencies, soaring as high as 11% against the Japanese yen (JPY) and around 8% against the euro (EUR), owing to growing monetary policy divergences between the Federal Reserve and ultra-accommodative central banks, such as the ECB and Bank of Japan.

The dollar also appreciated against risk-sensitive currencies such as the Australian dollar (AUD) and New Zealand dollar (NZD), though gains were less marked against the Canadian dollar (CAD) due to the increase in crude oil prices. The British pound (GBP) depreciated only slightly, as increasing inflation and sustained employment growth in the UK pushed the Bank of England to hike interest rates in December, the first time a major central bank had done so since the pandemic began. 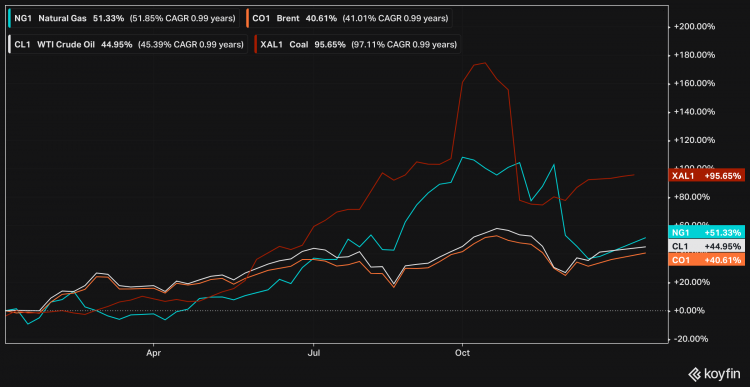 Energy commodities and fossil fuels such as coal, oil and natural gas had an astonishing year in terms of price increase.

Coal – the dirtiest fossil fuel – has doubled in price since the start of the year due to supply shortages, as China introduced power curbs and restrictions on coal imports to reach its climate targets.

Natural gas prices soared by 50% as demand spiked due to colder-than-usual temperatures while supply from Russia remained tight due to rising geopolitical tensions in Ukraine and delays in the Nord Stream 2 project approval.

Crude oil increased by more than 40%, its best performance in more than a decade, as global demand rebounded strongly and supply from OPEC remained stickier than expected.

8. A full year of oil prices in ‘backwardation’ 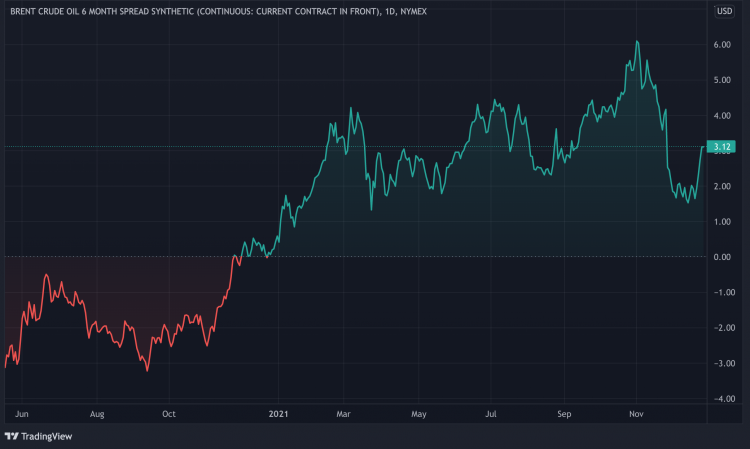 Crude-oil futures prices, which are contracts for buying or selling the commodity at a future date, have been in a prolonged “backwardation” state throughout 2021.

Backwardation is a peculiar market condition in which the price of short-term contracts is higher than longer-term ones, signalling a supply-demand mismatch, as buyers are ready to pay a premium for spot delivery to avoid future shortages.

At the end of December 2021, the price spread between Brent spot contract and Brent with a 6-month to maturity was slightly above $3 per barrel, after hitting a high of $6 dollars in early November.

9. Crypto market topped $2 trillion; Bitcoin dominance at the lowest since 2018 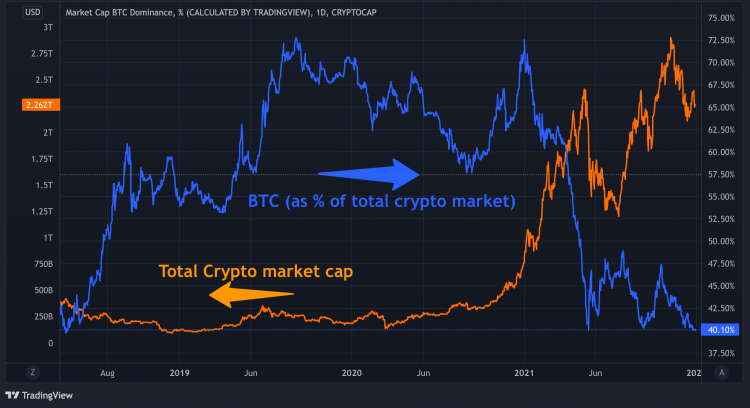 At the end of December 2021, the market value of all cryptocurrencies had more than doubled to $2.25trn since the start of the year, surpassing the size of Italy’s whole Gross Domestic Product ($1.9trn).

Bitcoin’s market value has exceeded $900bn, a 75% increase year-to-date, but its dominance in the cryptocurrency market has eroded significantly, now accounting for just 40% of overall crypto market capitalisation, the lowest level since 2018.

Gold’s performance in 2021 was negative, with prices dropping almost 5% from $1900 to $1800 per ounce, casting doubt on the metal’s traditional role as an inflation hedge.

Gold did not profit from an environment of low and negative US real yields, a critical barometer for the precious metal’s fate, as a stronger US dollar and the rising importance of Bitcoin in institutional portfolios limited gold’s gains.

To have a better understanding of the primary causes driving Bitcoin's rising importance at the expense of gold, we suggest watching the video below.